The 2019/20 Antarctic field season was a bustling time for IDP. The entire engineering staff of IDP deployed across five different sites. Using the Winkie Drill and Badger-Eclipse Drill, Engineer Grant Boeckmann and Research Intern Elliot Moravec successfully collected four subglacial rock cores on Thwaites Glacier in the Hudson Mountains for PI Brent Goehring’s project. Engineer Tanner Kuhl and Driller Elizabeth Morton supported PI John Higgins’s work at Allan Hills through operation of the Blue Ice Drill and the new Foro 400 Drill. IDP Warehouse Manager Jim Koehler operated the Intermediate Depth Logging Winch (IDLW) at South Pole Station in support of PI Kael Hanson’s logging of the SPICEcore borehole and then transitioned to WAIS Divide to assist Engineer Chris Gibson with testing of the new RAM 2 Drill components with the original RAM Drill compressors. They were also able to perform brief testing on the Small Hot Water Drill, which will serve as the backup drill for PI Sridhar Anandakrishnan’s GHOST project on Thwaites Glacier in 2020/21. Engineer Jay Johnson deployed to Minna Bluff with the RAID project at the request of PI John Goodge and the NSF. In addition to consulting on operation of the RAID equipment, Johnson also used an IDP 4-Inch Drill and chips bailer to assist in setting the RAID packer. He also re-terminated the IDLW cable following damage at South Pole and was assisted in this effort by Kuhl and Morton. The IDLW was then operated in two RAID boreholes by RAID and IceCube personnel. Despite substantial weather and aircraft delays program-wide, objectives were largely completed for all projects, and feedback received from PIs has been very positive. 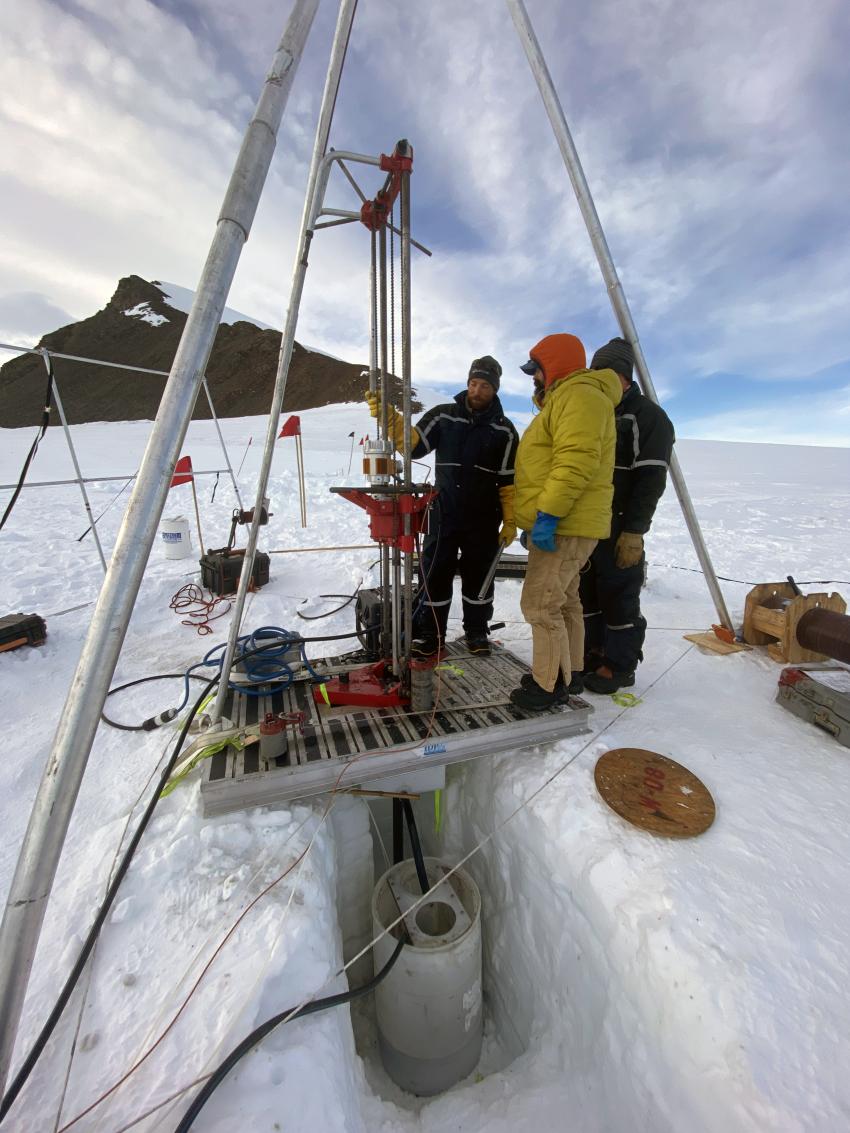 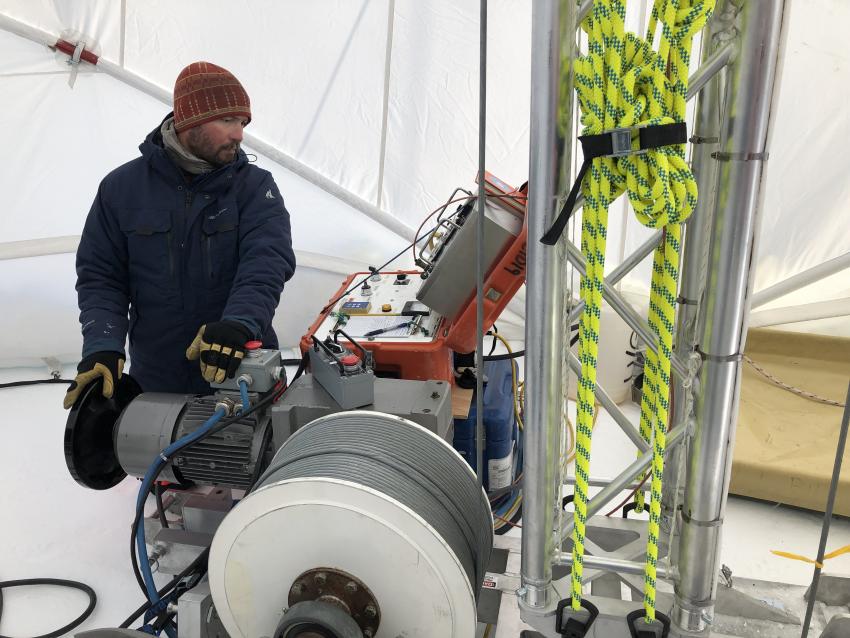 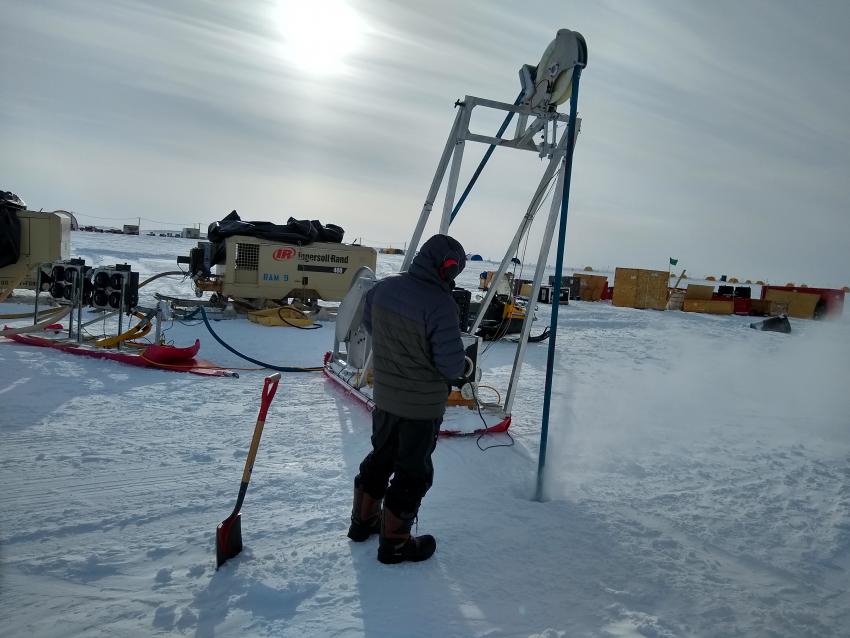 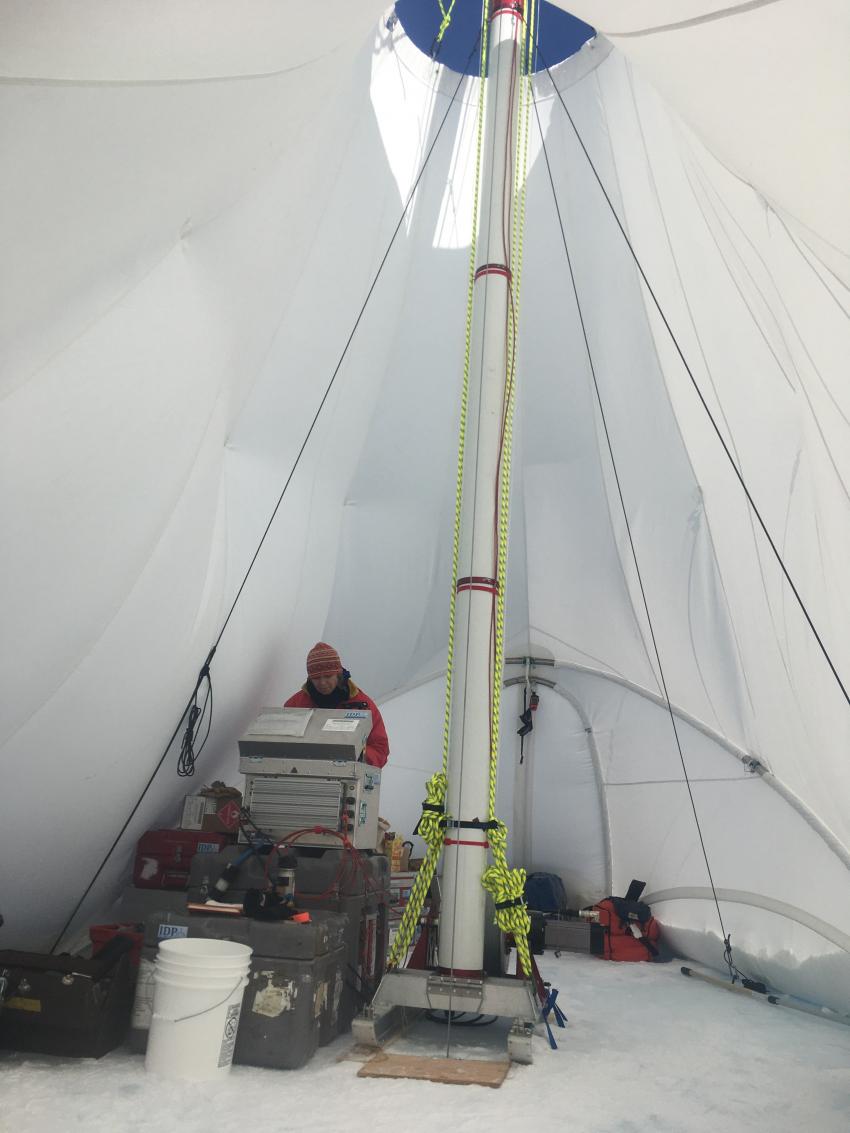 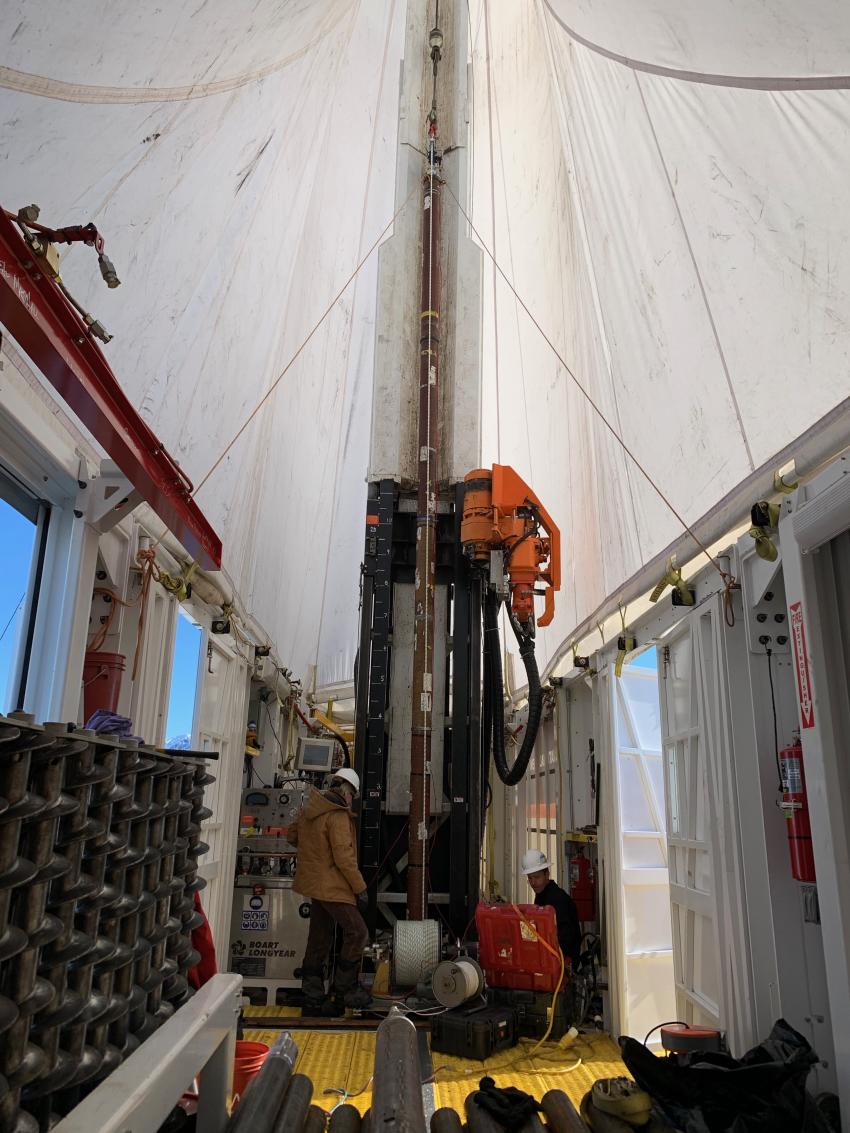 In addition, the team developed procedural efficiencies to reduce rig set-up and take-down time. Pack-up and module/parts organization will be completed early in the second quarter. 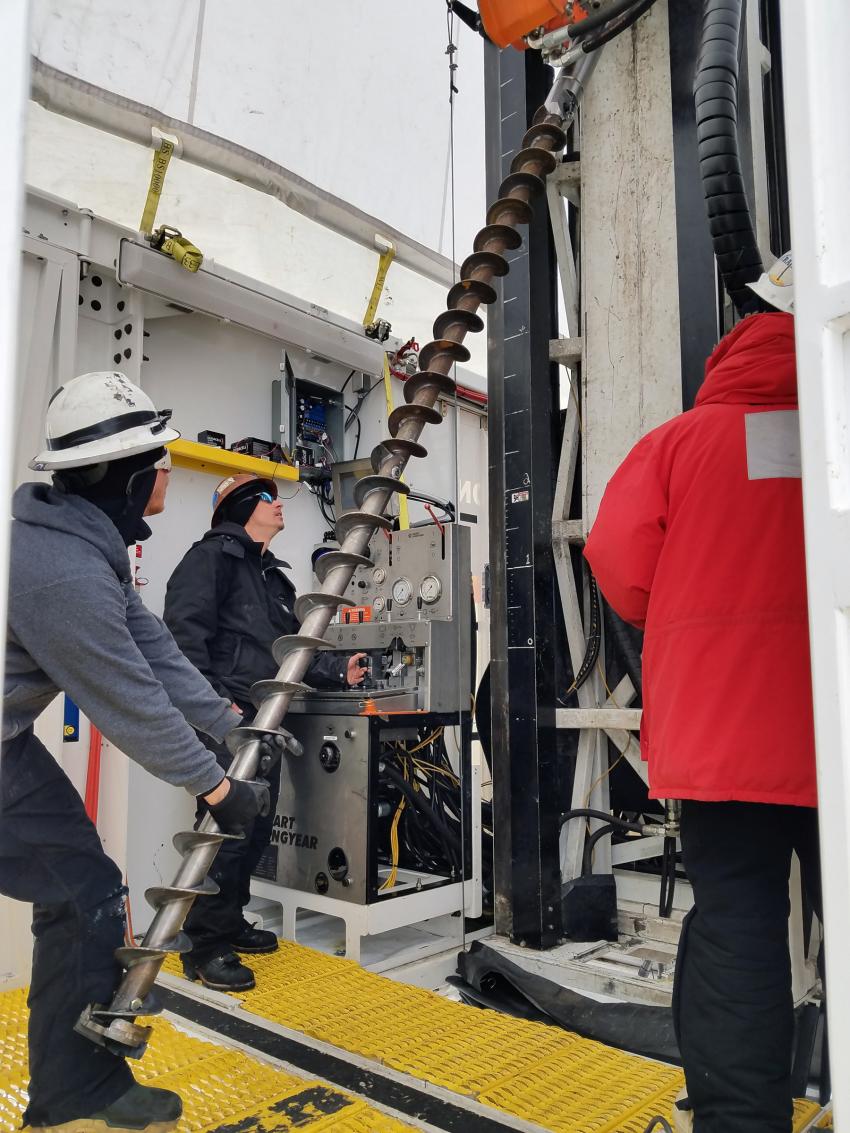 The Division of Polar Programs at the National Science Foundation has recently awarded an $8.97M grant to the University of Minnesota Duluth to begin construction of the Rapid Access Ice Drill (RAID). This new drilling system will be able to penetrate the Antarctic ice sheets in order to take cores of the deepest ice, sample across the glacial bed, and continue coring into bedrock below. This new technology will provide a critical first look at the interface between the major ice caps and their subglacial geology.

RAID is a mobile drilling system capable of making several long boreholes in a single field season in Antarctica. The projected long-term research use of the RAID system is planned to begin in late 2017 by traversing to East Antarctica via the Amundsen-Scott station at the South Pole. The RAID system is designed to be self-sufficient once leaving a fixed U.S. research base, and it is compact enough to be operated by a 3-person drilling crew.

DOSECC Exploration Services (DES), LLC, a drilling and engineering company based in Salt Lake City, is the lead contractor to construct and test the drilling system. DES took the lead in development and engineering of the drill design, which began in June 2013.

John Goodge, professor of Earth and Environmental Sciences at the University of Minnesota-Duluth, is the lead principal investigator on the project. He studies geotectonic evolution of continental crust in East Antarctica and the Transantarctic Mountains. Jeff Severinghaus of Scripps Institution of Oceanography, co-principal investigator, conducts research on Antarctic paleoclimate by study of ice cores. 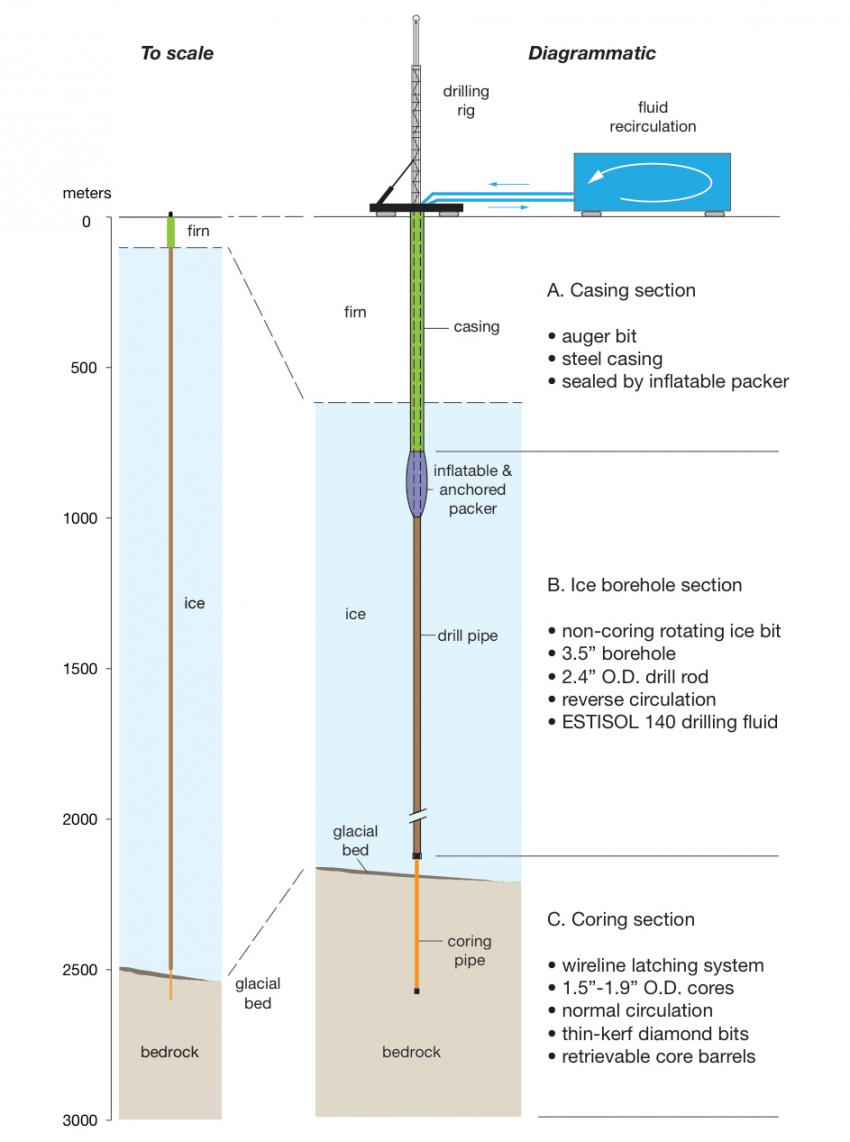 Construction of the drilling system began in June, 2014. Initial field tests of the system in North America are scheduled for early 2015, to be followed by a set of field validation trials in Antarctica in the 2016-17 austral summer.

The RAID platform is designed to address a wide range of interdisciplinary research goals of the international scientific community. These include a search for polar paleoclimate records in ice greater than 1 million years old, observation and sampling of the base of the Antarctic ice cap, and recovery of rock cores from ice-covered geologic provinces of Antarctica, a virtually unknown continent larger than the continental U.S. By keeping the boreholes open with a stabilizing fluid after drilling is complete, researchers will also be able to lower instruments and logging devices into the boreholes in order to measure thermal gradient, heat flow, ice accumulation history, and ice deformation processes. RAID will also sample for extremophile micro-organisms that may be present at the base of the ice sheets.

This new drilling system is based on modification of an industry-standard diamond rock-coring system as used in mineral exploration. Threaded metal drill pipe sections will be assembled at the surface as the drill cuts its way downward through ice using customized metal bits. A special circulating fluid will be used to lubricate the drill pipe, maintain proper temperature at the cutting surface, and return ice cuttings to the surface, where they will be separated from the recirculating fluid. Near the bottom of the ice sheet, diamond tools will be lowered through the drill string to enable coring of ice, material in the glacial bed, and the solid bedrock below. These cores will be returned to the surface in sections by use of a wireline retrieval system. Once drilling is complete, the boreholes will be maintained with a stabilizing fluid, capped, and made available for future down-hole measurements. 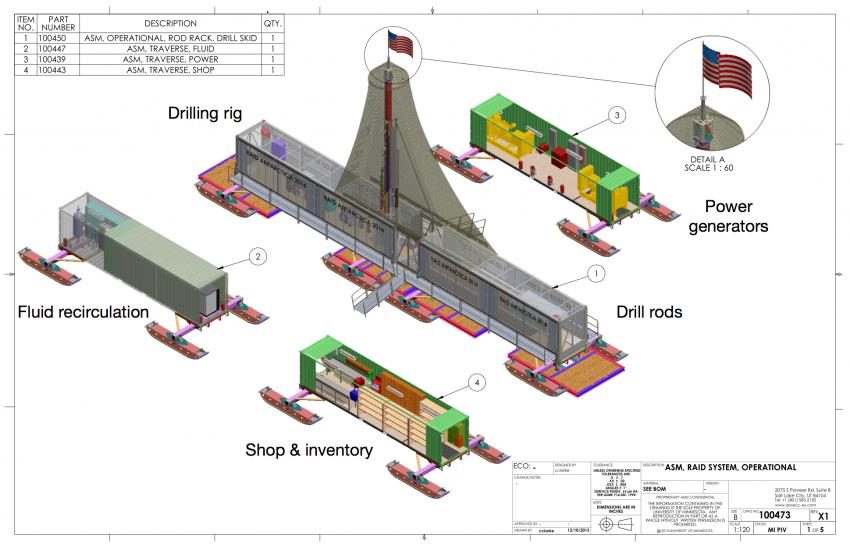 RAID Operational Layout. RAID is designed to penetrate up to 3,300 meters of ice (nearly 11,000 ft) and take sample cores in less than 200 hours. This rapid performance will allow a drilling crew to operate from start to finish in about 10 days before moving on to the next drilling site. Credit: John Goodge

RAID is designed to penetrate up to 3,300 meters of ice (nearly 11,000 ft) and take sample cores in less than 200 hours. This rapid performance will allow a drilling crew to operate from start to finish in about 10 days before moving on to the next drilling site.

RAID is unique because it can provide fast borehole access through thick ice; short ice cores at the base of the ice sheet for paleoclimate study; cores of the glacial bed to determine flow conditions; cores of subglacial bedrock for age dating and crustal history; and create boreholes that can be used as an observatory in the ice sheets. Together, the rapid drilling capability and mobility of the drilling system, along with ice-penetrating imaging methods, will allow scientists to build a 3D picture of the interior Antarctic ice sheets in a way that has never been done before.

After completing revisions to the drill design and Prospectus document, IDDO sent one engineer and one contract engineer/driller to Indianapolis to visit Laibe Corporation. There they were able to view several mineral exploration rigs and discuss applications for Antarctic drilling with company management. With support from IDPO/IDDO, a proposal was submitted by P.I. John Goodge for development of the drill.

IDDO Engineer, Michael Gerasimoff, completed the feasibility and concept of a drill capable to quickly access the beds of ice sheets and ice intervals of interest. The drill system, called the Rapid Access Ice Drill (RAID), would be based on a mineral-exploration industry "diamond-drilling" rig and is envisioned to be capable of drilling through up to 3300 m of ice and collecting several hundred meters of core from the subglacial material.

IDPO led a series of planning meetings involving community members, IDDO, industry, and logistics support representatives to come to consensus on science requirements and overall design features of a unique drill, the Rapid Access Ice Drill (RAID). This novel drill will be able to drill through 3.3 km of an ice sheet, retrieving ice core samples from selected depths and drilling up to 25 m of rock core from beneath the ice. An IDDO team led by Michael Gerasimoff evaluated the feasibility of several possible technologies on the basis of meeting science requirements, cost and logistical burden. By the end of December 2011, IDDO had substantially developed a concept for the drill that would meet the science requirements at a reasonable cost and logistical burden. IDDO will produce a report in January 2012 that includes a technical description of the drill system concept, estimates of cost, and schedule for development.

For more information about the RAID, visit: http://www.rapidaccessicedrill.org/

During the April 2011 Ice Drilling Science Community Planning Meeting, the need for a rapid access ice drilling (RAID) system was articulated. The objective behind the RAID system is to drill through 4 kilometers of ice in a week, taking pieces of ice core along the way, and then recover bedrock core. Such a drill has long been desired by the glaciology and geology communities; after the April workshop, John Goodge (University of Minnesota-Duluth) asked for IDPO/IDDO assistance in generating information that could support a Major Research Instrumentation (MRI) proposal for a RAID drill that he will submit in January 2012. In October, IDPO held a meeting in Madison, WI attended by scientists John Goodge and Jeff Severinghaus (UC-San Diego), IDDO engineers, industry experts, and IDPO to discuss possibilities and tradeoffs of technologies associated with development of a RAID system. This set the stage for IDDO work on the conceptual plan for a RAID system this fall. The science requirements, initially compiled during the April 2011 IDPO Community Planning workshop, have been subsequently refined by John Goodge and Jeff Severinghaus as part of the scientist-engineer-logistics discussions in biweekly IDPO-organized webteleconferences following the October meeting. Using the input provided by IDPO/IDDO, John Goodge will submit an MRI proposal in January 2012 for construction of the drill.

On April 15-16, 2011 the IDPO sponsored an interdisciplinary Ice Drilling Science Community Planning Workshop held in Herndon, VA. The purpose of the workshop was to identify future Arctic and Antarctic ice drilling and coring sites, the ice drilling technology that will be needed at the sites, and the timeline over the coming decade for conducting the science. The workshop was well attended, with thirty-four people from the science, science support, and science funding communities in attendance, and proved to be very productive. The first day of the workshop started with short presentations from the scientists discussing their current ice drilling technology needs/desires. The afternoon involved forming four break-out groups centered around the following subject areas: (1) subglacial aquatic environments access drilling; (2) 10-year plan for shallow (1-400 meter deep) coring capabilities; (3) rapid access ice drilling (RAID) system; and (4) hot water drilling. Each break-out group discussed future drilling sites, drilling requirements, and tentative schedules, and began summarizing the information in a short white paper. Day two continued with the individual break-out group discussions and white paper development, and concluded with each break-out group reporting back to the entire workshop on their developments and whole group discussions.

Results from the workshop are reflected in updates to the science descriptions, timeline and planning matrices in the Long Range Science Plan and the corresponding Long Range Drilling Technology Plan to help ensure that the drilling technology will be ready when needed by the community's science.

For the workshop agenda and the list of workshop attendees, visit the workshop's web site: https://icedrill.org/meetings/2011-ice-drilling-science-community-planning-workshop