The rotating drill head contains 4 razor sharp cutters that shave out an annulus of ice, which the 14 meter long drill slides down into. As the drill slides down into the annulus it slides over the core, which is 12.2 cm in diameter. When a cable pulls up the drill, four cams grab the core and fracture it. After the drill is pulled back to the surface, it is lowered from a vertical to a horizontal orientation.

The sonde is the down-hole portion of the drill system that cuts the ice. The sonde consists of a cutter head, a core barrel in which the core is collected, screens to remove chips from the drill fluid, a motor and transmission to drive the cutter head, a pump to circulate ice cuttings in the drill fluid through the sonde, an instrumentation/ control section, and an anti-torque section to stabilize the drill in the borehole and the mechanical, electrical power, and optic fiber terminations of the cable which include rotary joints that allow the drill sonde to rotate relative to the cable.

The cable is used to suspend the drill sonde in the borehole. The cable also provides electrical power and fiber optic communication to the drill. The cable diameter is 15 mm.

The tower consists of a mast (constructed of modular truss sections) at the top of the borehole with a number of pulleys to allow for the raising and lowering of the sonde and positioning the sonde for removal of the core. The DISC Drill tower tilts from vertical to horizontal to allow easy core removal and drill sonde servicing.

The winch provides the means of hoisting the drill from the borehole. The components of the winch system include the winch drum, which can hold 4,400 meters of cable, a level-wind system that allows for the payout of cable from the winch drum with a single sheave, and a drive system. The winch is electrically driven and unusual in that the drum axis is parallel to the drill cable as the cable runs between the winch and tower with the level wind traversing back and forth across the width of the drum in line with the cable. This configuration allows the winch to be connected to the tower base resulting in a smaller footprint.

Control for the entire drill system is PC based with the user interface being developed using LabView.  Data from the drill sonde, the tower, and the winch are displayed and drill control parameters set using the computers. The computers are installed in a 1.78 meter x 3.53.meter x 2.00 meter insulated and temperature controlled room which is positioned to allow the operators to observe the drilling equipment and operations.

The borehole fluid provides hydrostatic compensation, necessary to prevent closure of the borehole due to glaciostatic pressure of the surrounding ice. The first project utilizing the DISC Drill (WAIS Divide) uses a two-part fluid similar to that used by the European deep coring projects. The heart of the fluid handling system is a tank in which the two drill fluid components are mixed. All associated measurement devices, valves and pumps are integrated into the tank assembly and the mixing is controlled by a microprocessor. The remainder of the system consists of piping to transport the fluids to the tank for mixing and piping to inject the mixture into the borehole. Fluid that drips from equipment and that is recovered from the ice chips is returned to the borehole. A centrifuge is used to remove fluid entrained in the recovered ice chips; the fluid is returned to the fluid system.

Equipment not directly involved with the drilling operation, but integral to the system, includes a shop facility and a gantry crane. The shop, designed to facilitate repairs to the drill in the field, is contained in an expandable container shelter housing a machine shop, a welding shop, and an electronics shop. The A-frame gantry crane runs on rails that are used by the smaller core handling crane and is used to move equipment, particularly during drill system installation and "tear-down". 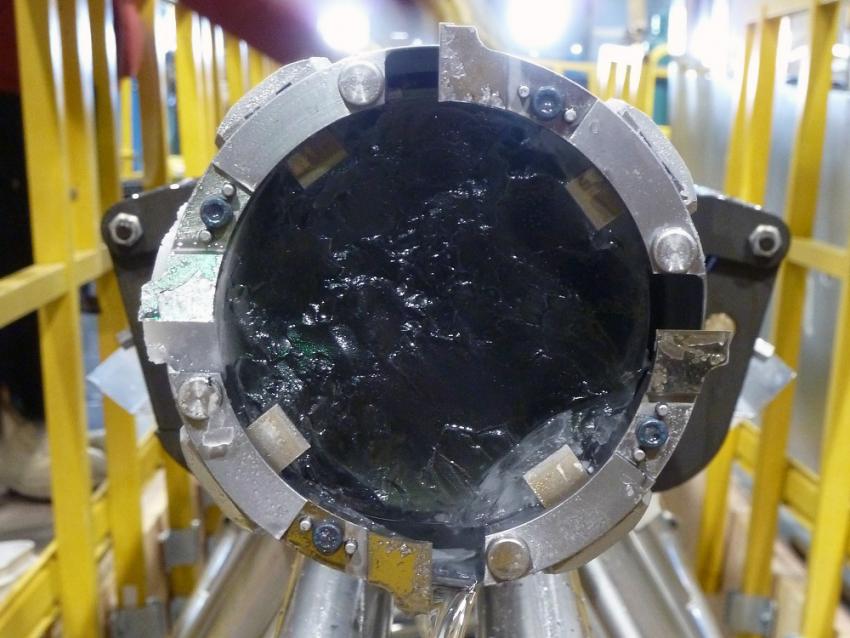 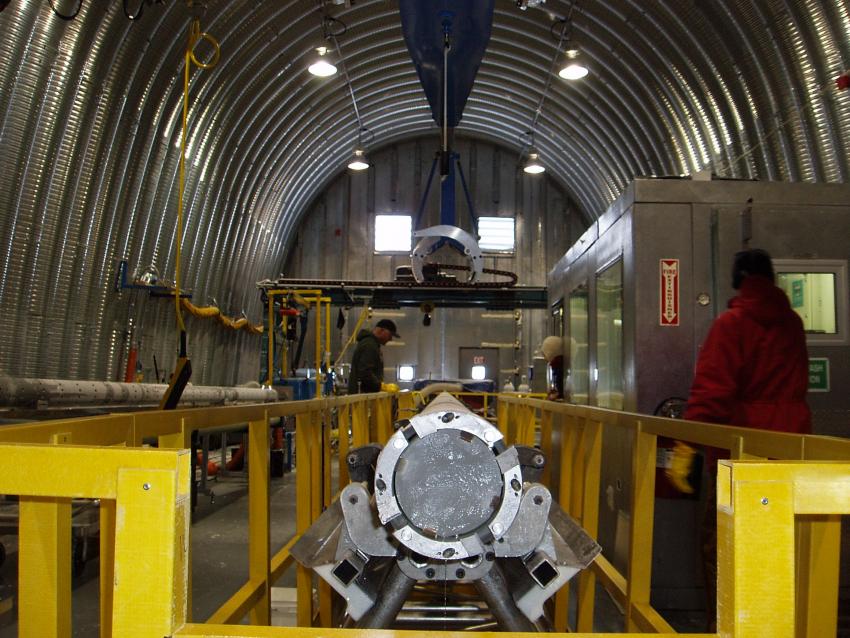 The drill head of the DISC Drill with a core inside the drill barrel. The rotating drill head contains four razor sharp cutters that shave out an annulus of ice, which the drill then slides down into. As the drill slides down into the annulus it slides over the core, which is 122 mm (4.8 inches) in diameter and 2.7 meters long. When a cable pulls up the drill, four cams grab the core and break it free. After the drill is pulled back to the surface it is lowered from a vertical to horizontal orientation so that the ice core can be removed from the drill barrel. Credit: Jay Johnson 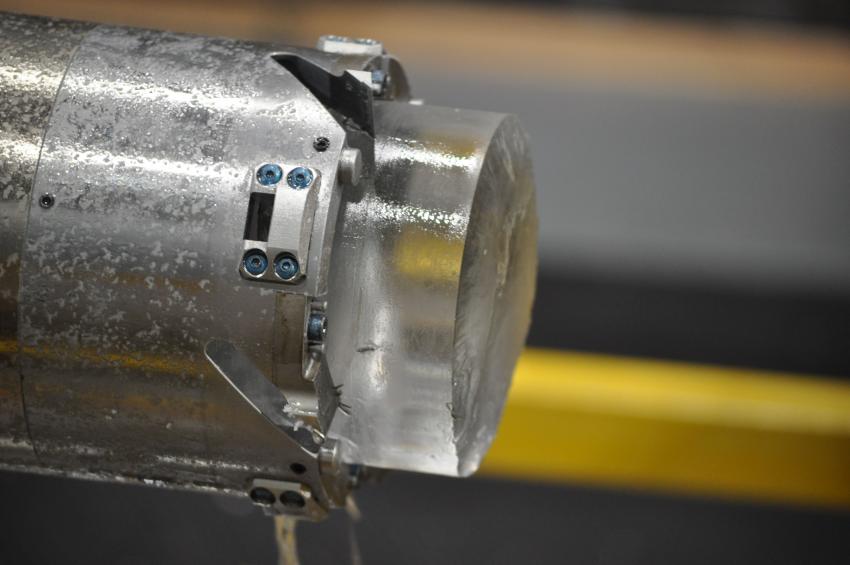 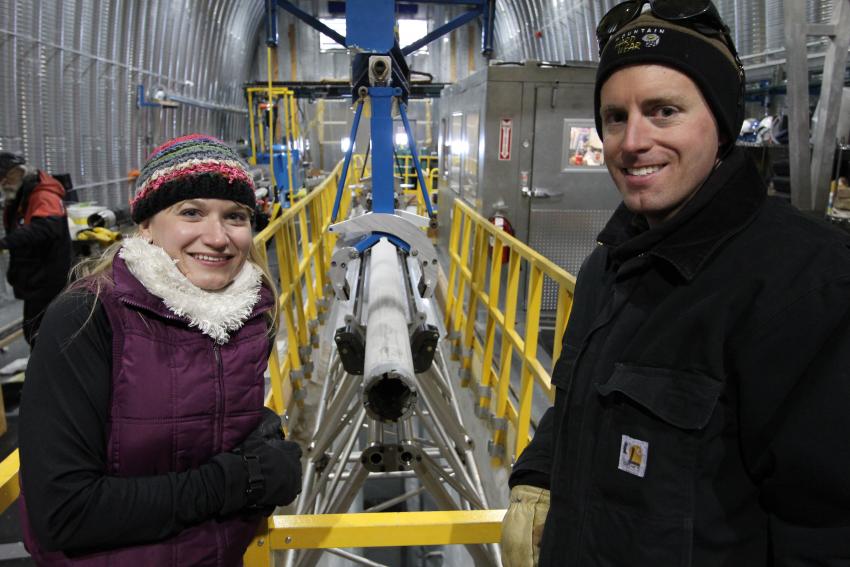 Kristina Slawny and Jay Johnson stand next to the DISC Drill. Krissy and Jay are from IDP-Wisconsin and were the lead drillers at WAIS Divide. Credit: Jay Johnson 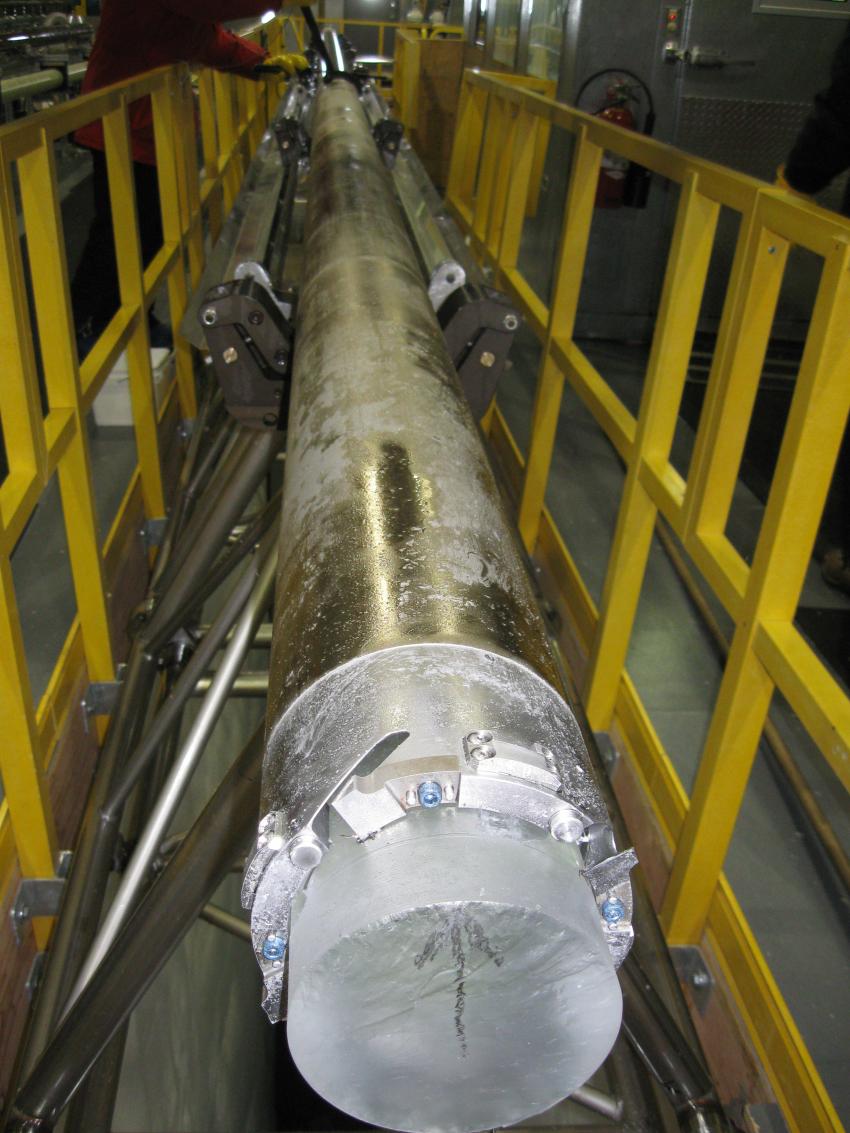 A run of core with a bottom break sticking out of the DISC Drill. Credit: Peter Neff

The barrel of the DISC drill with a 122 mm diameter ice core inside. Credit: Kristina Slawny