Sediment Laden Lake Ice Drill (SLLID)
The new Sediment Laden Lake Ice Drill (SLLID), designed and built by IDDO, is a 28kW hot water drill useful for creating holes with very little initial water, for freeing instrument cables from the ice, and for accessing equipment deployed beneath the ice. The drill is effective at drilling through sediment laden ice and allows safe servicing of science instruments deployed in the lakes and ocean. 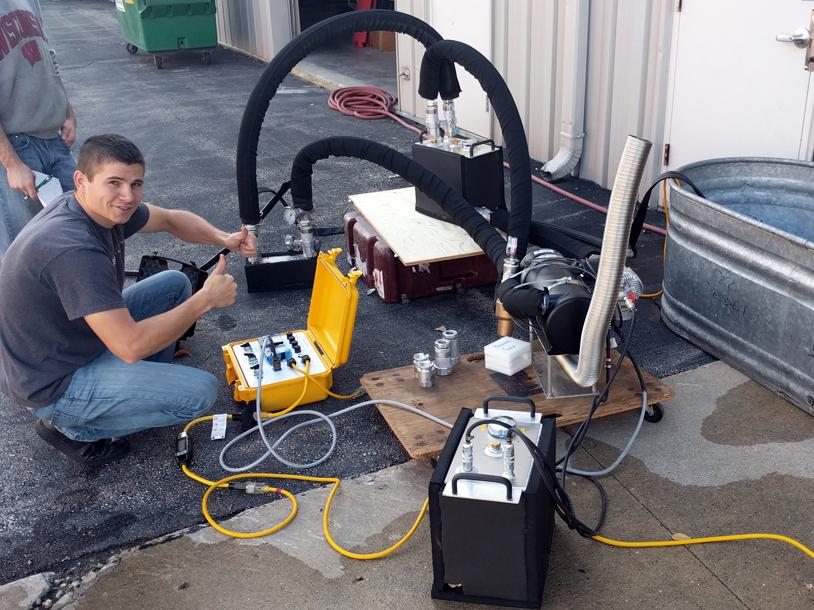 Testing of the SLLID at the IDDO warehouse in Madison, WI. Credit: IDDO 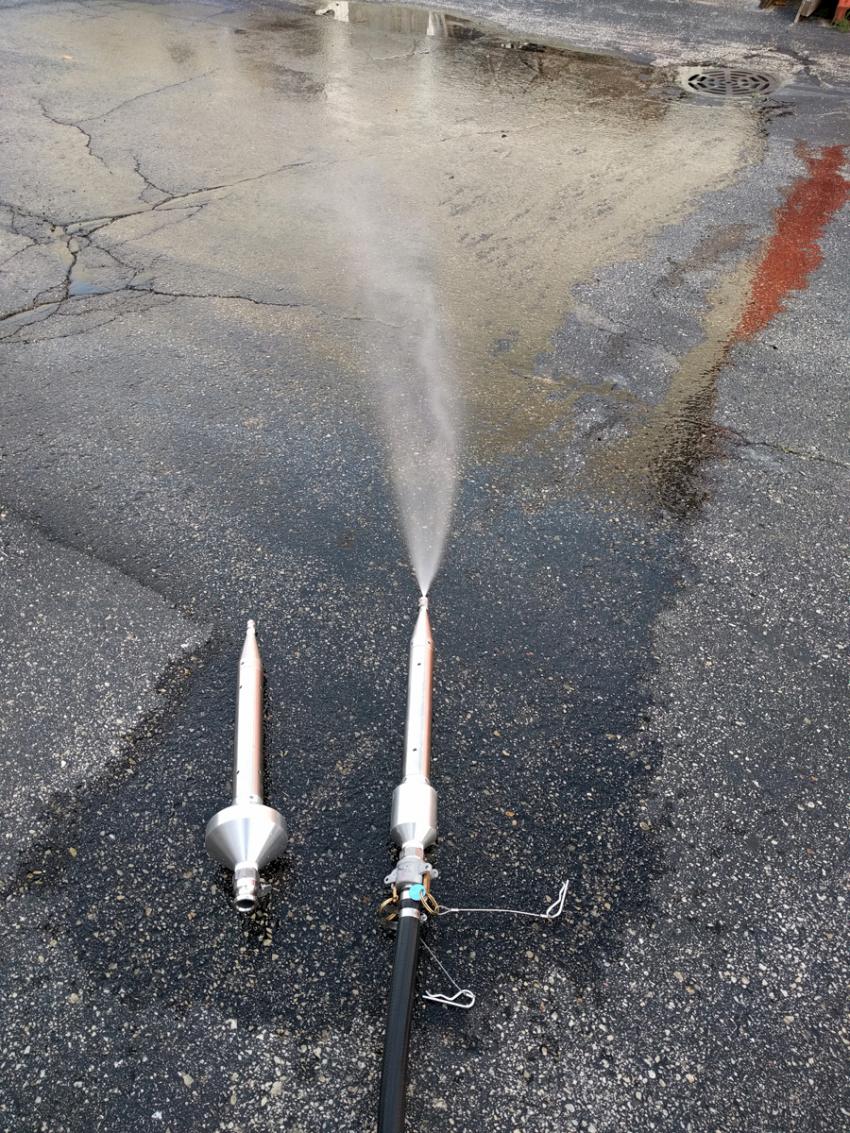 The drill heads for the SLLID. Credit: IDDO 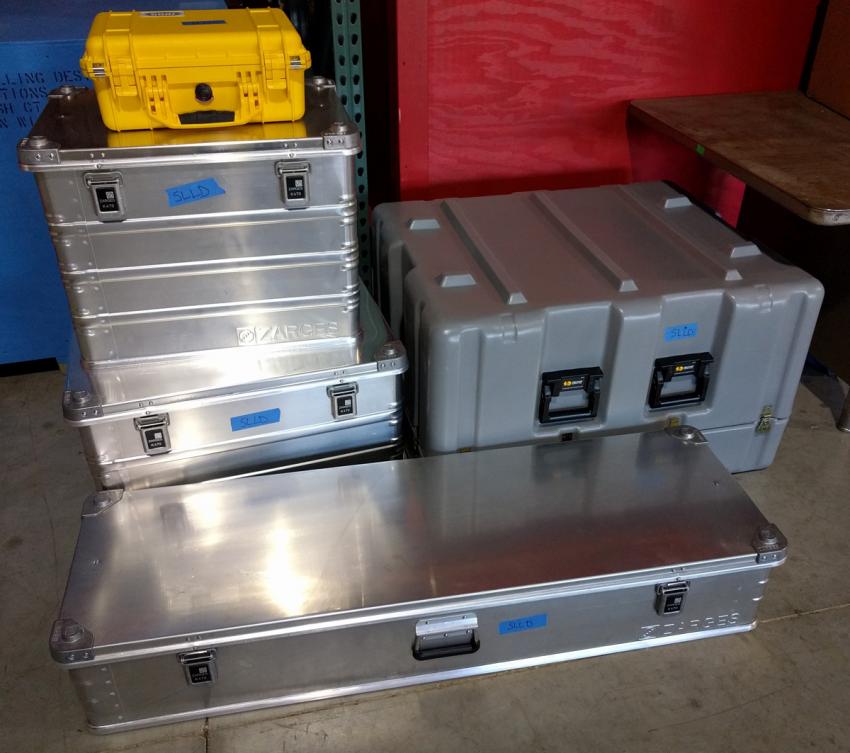 The SLLID packed and ready for deployment to the field. Credit: IDDO

Stampfli Drill
The Stampfli Drill, a commercially-available shallow ice coring system purchased and received by IDDO in early 2017, is now ready for issue to investigators. Following a test of the system at Summit Station, Greenland, IDDO engineers made slight modifications to the commercial kit to include a more robust and replaceable steel cutter design and implemented a more efficient and lightweight packing strategy for remote deployments utilizing small aircraft and manpower for cargo movements. A tent is also available for use with the system. Science teams may operate the system on their own, with no drilling support from IDDO required, but are encouraged and welcome to visit IDDO in Madison, WI for pre-deployment hands-on familiarization training with the system if desired.

For more information about the Stampfli Drill, contact IDPO-IDDO at Icedrill at Dartmouth dot edu. 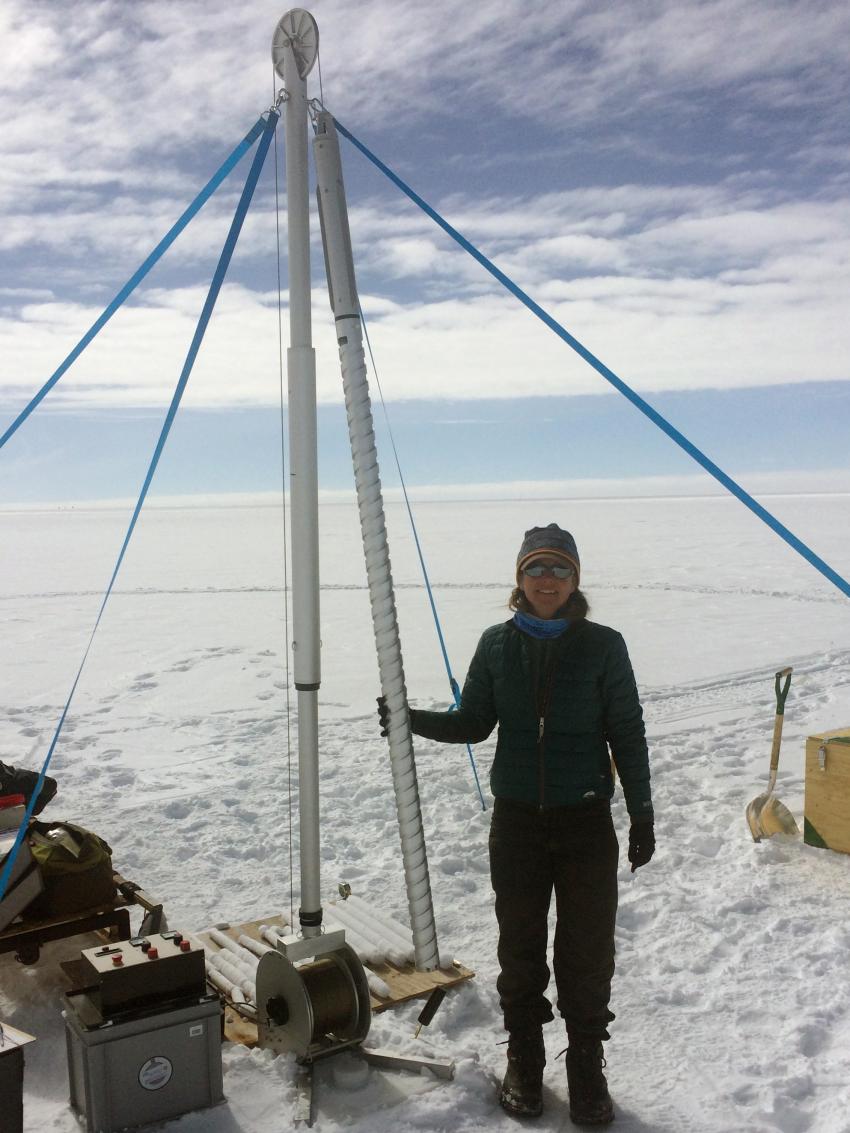 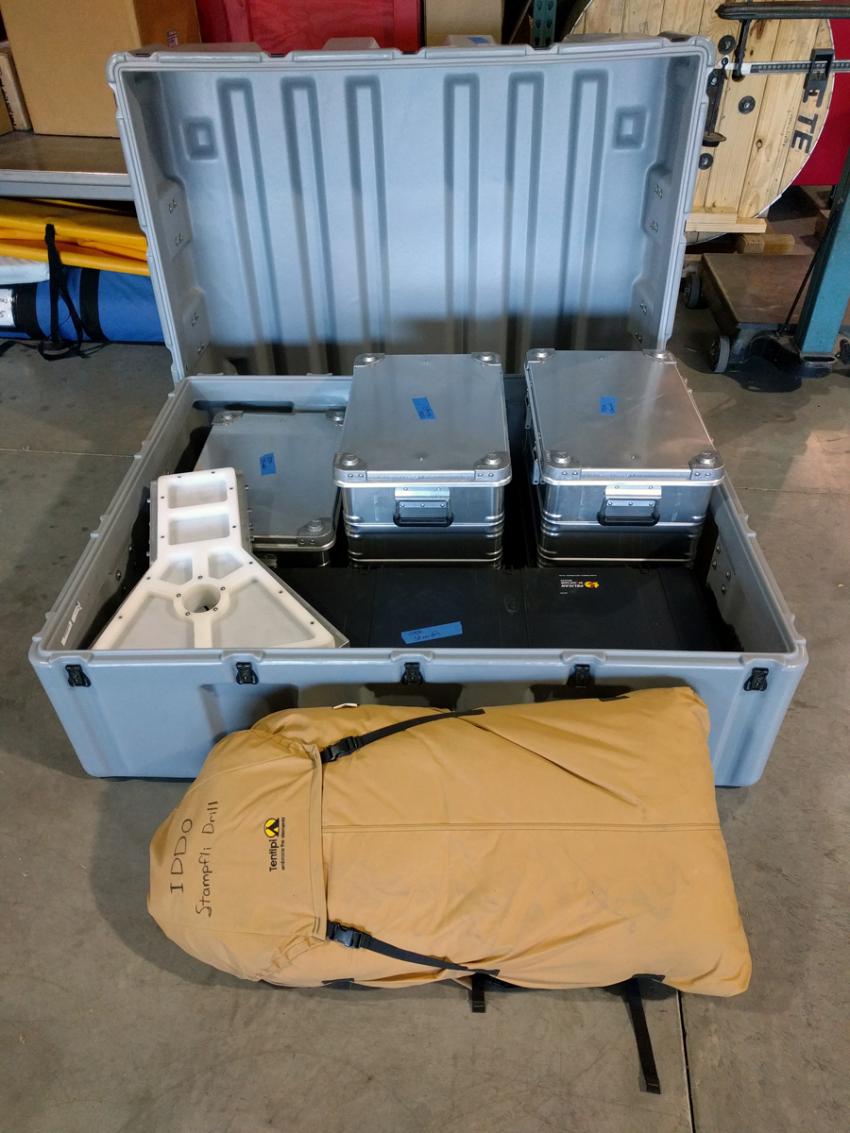 IDDO is providing support to the following projects during the 2017-2018 Antarctic field season:

(1) the Buried Glacier Ice Masses, Ong Valley, Transantarctic Mountains project (PI Putkonen; G-192-M) will use the Winkie Drill and a hand auger to access a large body of ice that is buried beneath approximately a meter of debris. Samples will be collected from this buried ice mass, down to a depth of 10 meters, and cosmogenic nuclide concentrations both in the overlying debris and in the till contained in the ice will be measured to determine the age of the ice and its rate of sublimation. IDDO is deploying one driller for the project.

(3) in the context of the already planned RAID Minna Bluff field work, the Minna Bluff Firn Core and Firn Air Sampling project (PI Severinghaus; D-551-M) will use the 4-Inch Drill to drill a 100-meter firn core to measure density and to pump firn air at a limited number of depths. The main science goals are to 1) obtain an accurate accumulation rate and density profile to add to the calibration of firn densification models, and 2) to pump firn air samples for testing whether noble gas isotopes exhibit gravitational disequilibrium as seen in other high-accumulation sites such as Law Dome, East Antarctica. The IDDO engineer operating the Deep Logging Winch at Minna Bluff will also operate the 4-Inch Drill.

(4) the Radio and Optical Measurements of Glacial Ice Properties Using the SPICEcore Borehole project (PIs Halzen and Hanson; A-333-S) will utilize the Intermediate Depth Logging Winch to lower a series of optical+UV and radio sensor packages into the South Pole Ice Core (SPICEcore) borehole to the full depth of the hole (1751 meters). The science goals of the IceCube project include measurements of the radio absorption length of the ice from 100-1000MHz, radio birefringence in the ice, and ice index of refraction, all measured as a function of depth and ice temperature.

IDDO is also deploying one engineer to the South Pole to assist with the Askaryan Radio Array (ARA) hot water drilling efforts (PI Karle; A-107-S). This valuable opportunity will provide IDDO with hands-on experience with a hot water drilling system in the field. The engineer will also be available for consultation during the SPICEcore borehole logging. 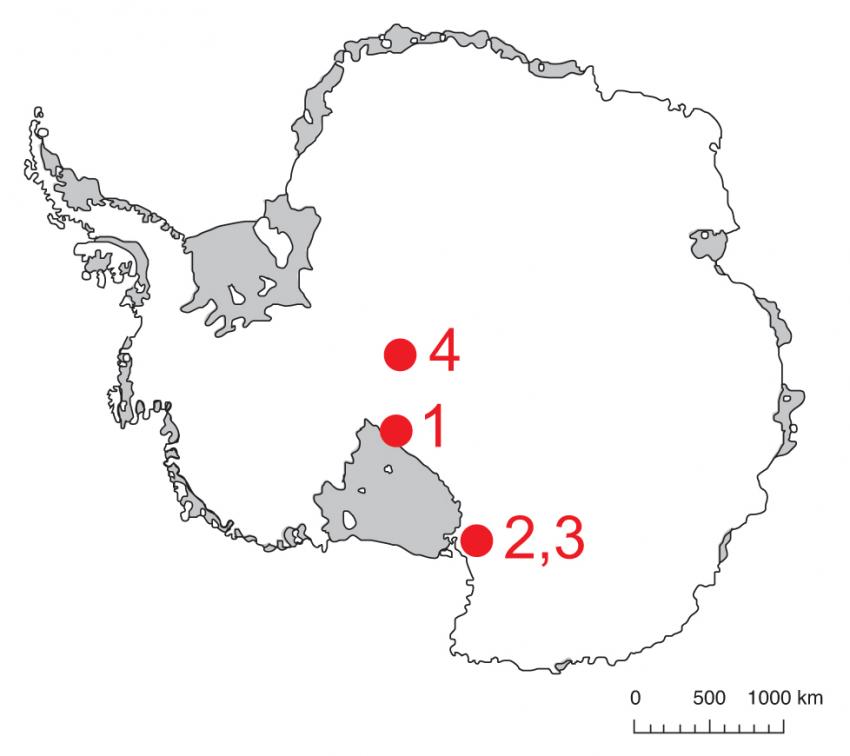 Map of Antarctica showing IDDO 2017-2018 field season locations. The numbers shown on the map correspond to the project numbers in the text.

The Ice Drilling Program Office (IDPO) is once again organizing a Town Hall meeting at the Fall AGU Meeting entitled 'TH23H: Scientific Drilling in the Polar Regions'. Ice sheets, glaciers, and the underlying bedrock, sediment and permafrost hold crucial evidence of past climate, ice sheet extent, and cratonic geology. National and international collaboration for drilling in the remote polar regions requires strategic coordination between science, technology, and logistics. This meeting will provide the research community with updates on IDPO-IDDO, IPICS, IPA, RAID, and SALSA drilling initiatives. Opportunities for community involvement will be showcased, and input from the audience will be solicited.

The IDPO Education and Outreach Program website (climate-expeditions.org) has undergone a complete re-design and update. It features a designated section for the School of Ice as well as many new activities, labs and resources for middle school, high school and college educators as well as a growing "public" area. The website will continue to evolve and grow with feedback from our ice core science network of educators, scientists and engineers. 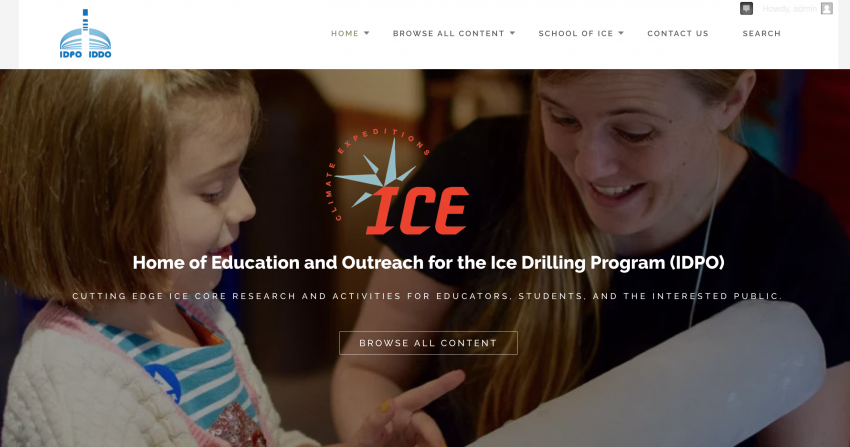 Screenshot of the new IDPO Education and Outreach website

The School of Ice is an experiential advanced professional development workshop, funded by NSF, for faculty at Minority Serving Institutions who want the opportunity to expand their knowledge of Earth's climate record through analysis of paleoclimate records collected with drilling support by the US Ice Drilling Program. Participants build scientific knowledge and skills while engaging in hands-on investigations and exploring resources for transferring ice science to their existing courses or to newly developed ones. They will network with ice core scientists, engineers and educators as well as with other workshop participants.

The application is available at http://climate-expeditions.org/school-of-ice-application-and-video/ . 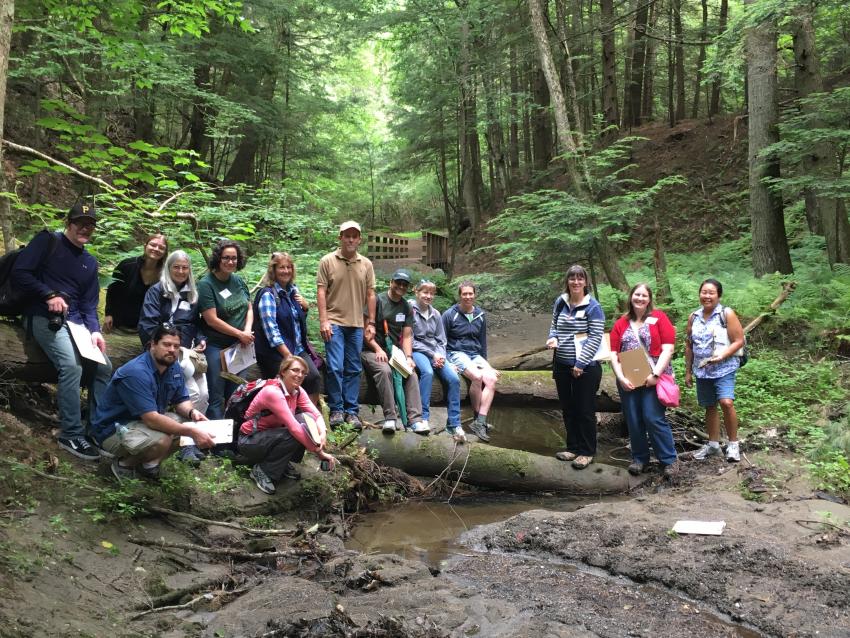 Group photo of the participants and facilitators from the 2017 School of Ice workshop.

If you are preparing a proposal that includes any kind of support from IDPO-IDDO, you must include a Letter of Support/Scope of Work (LoS/SoW) document from IDPO-IDDO in the proposal. Researchers are asked to provide IDPO-IDDO with a detailed support request six weeks prior to the date the LoS/SoW document is required. Early submissions are strongly encouraged.

One aspect that has changed in our Letter of Support is that the costs for IDDO driller salary associated with providing the field drilling support is no longer requested from the NSF Science Program Managers, rather it is provided from within our IDPO-IDDO Cooperative Agreement with NSF. This means that the IDDO costs to NSF science projects are lower than they have been in the past. 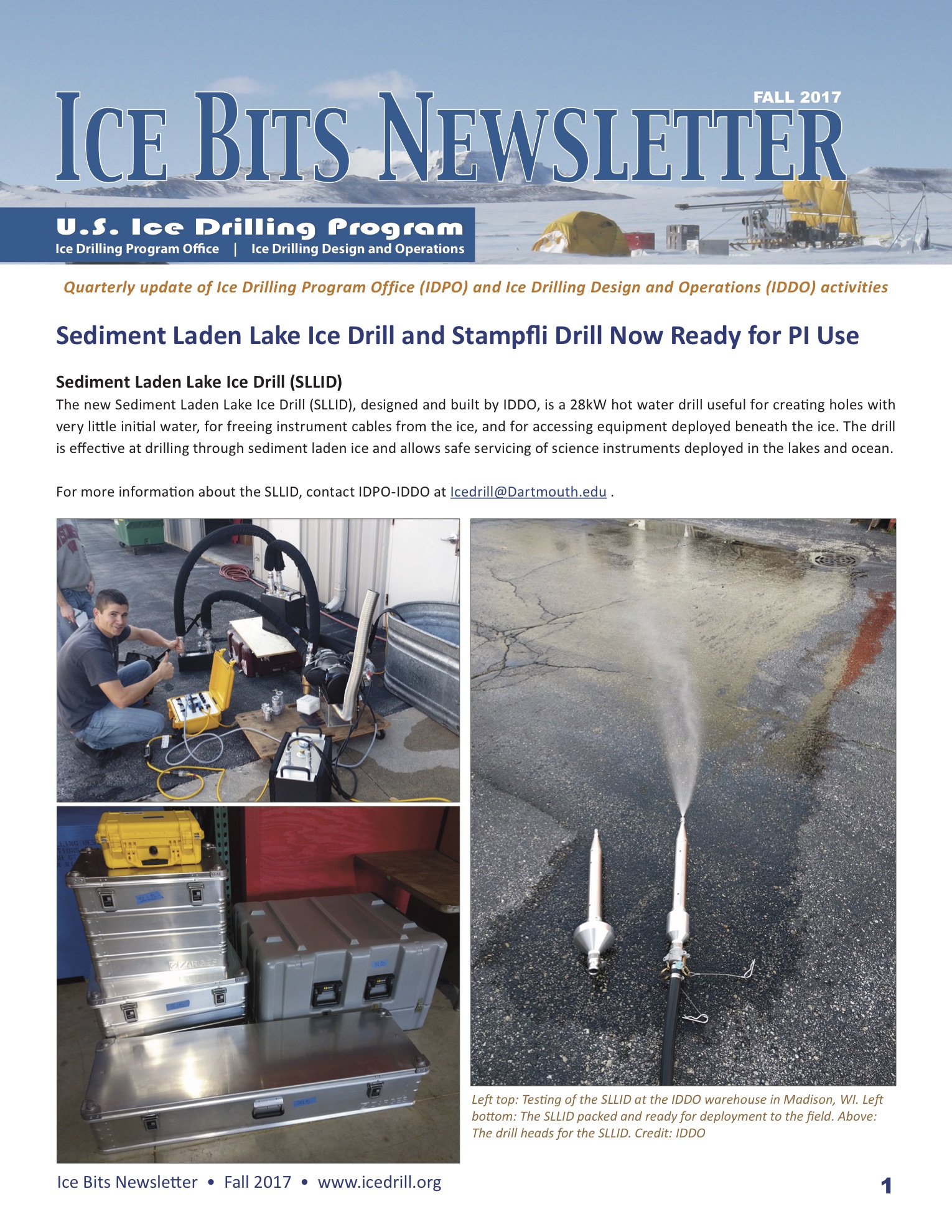