Despite uncertainties surrounding and delays stemming from the government shutdown in Fall 2013, Antarctic fieldwork was successfully completed for IDDO-supported projects. 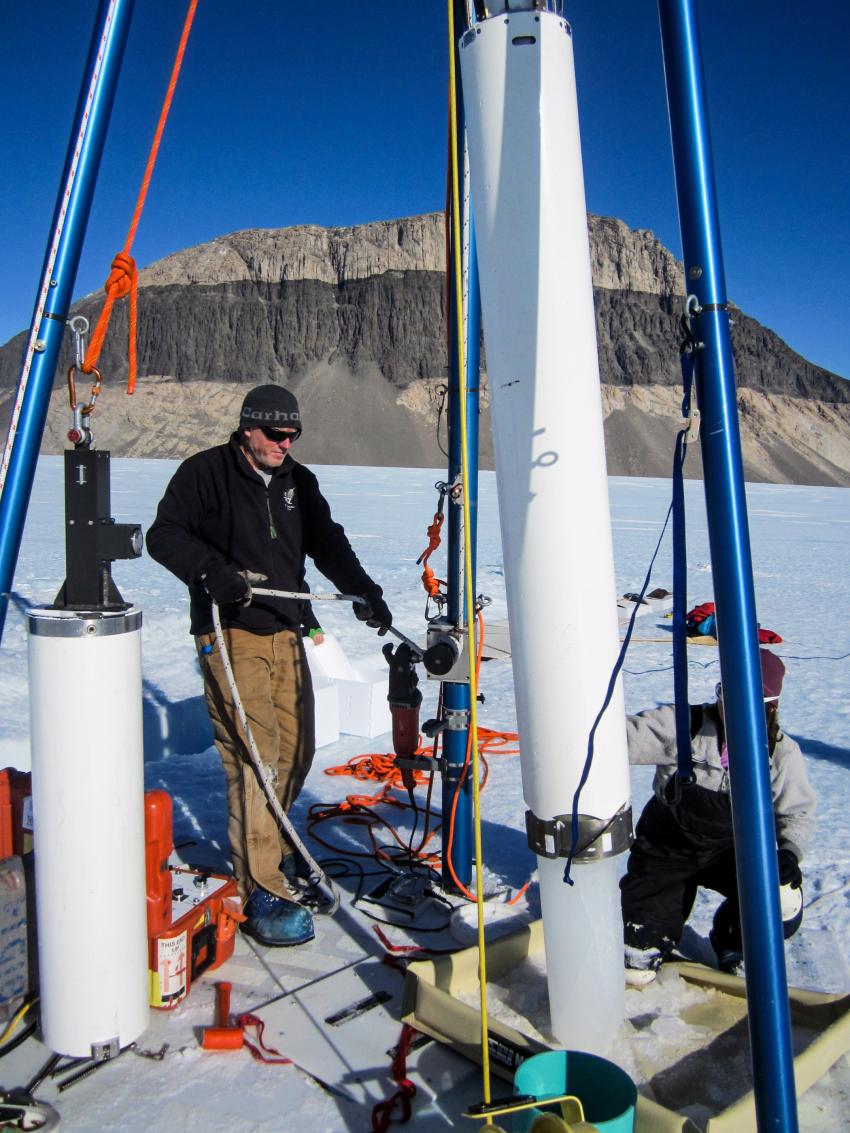 Siple Dome (PIs Bay and Talghader)
Due to the government shutdown, the U.S. Antarctic Program decided against opening WAIS Divide Camp this season. This has delayed borehole logging operations at WAIS Divide by one field season, but is not expected to negatively impact the disassembly and removal of the DISC Drill from the site, which is now scheduled to occur in 2014-2015. Due to the impact of the shutdown on the logging operations planned for WAIS Divide, PIs Joey Talghader and Ryan Bay altered their project plans to complete less logistically-intense logging projects at Siple Dome this season, both of which were originally planned for the 2014-2015 field season. Assisting in their operations were Josh Goetz and driller Elizabeth Morton. Despite severe flight delays and poor weather at Siple Dome, a very successful maiden voyage of IDDO's new Intermediate Depth Logging Winch helped to complete all project objectives. 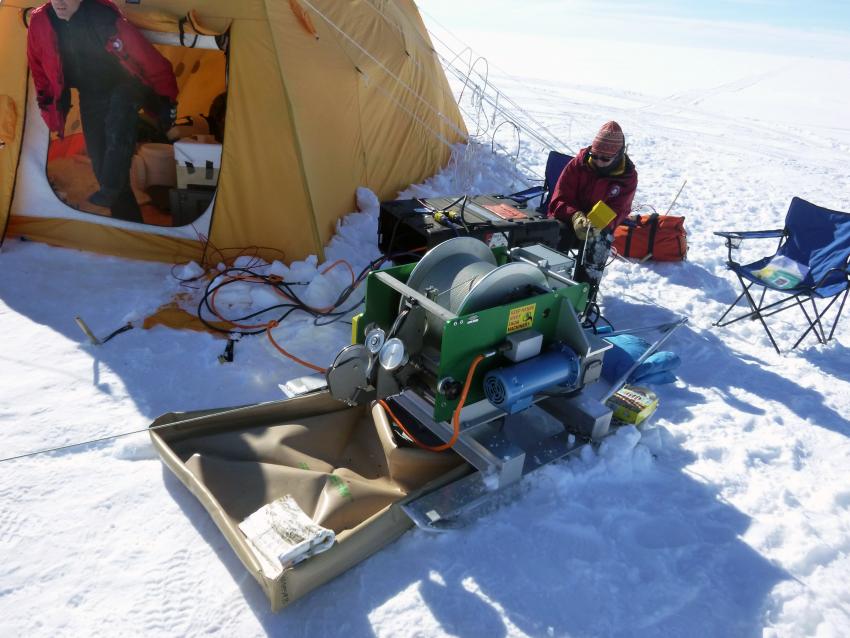 The new intermediate logging winch for logging boreholes up to 1500 meters deep. 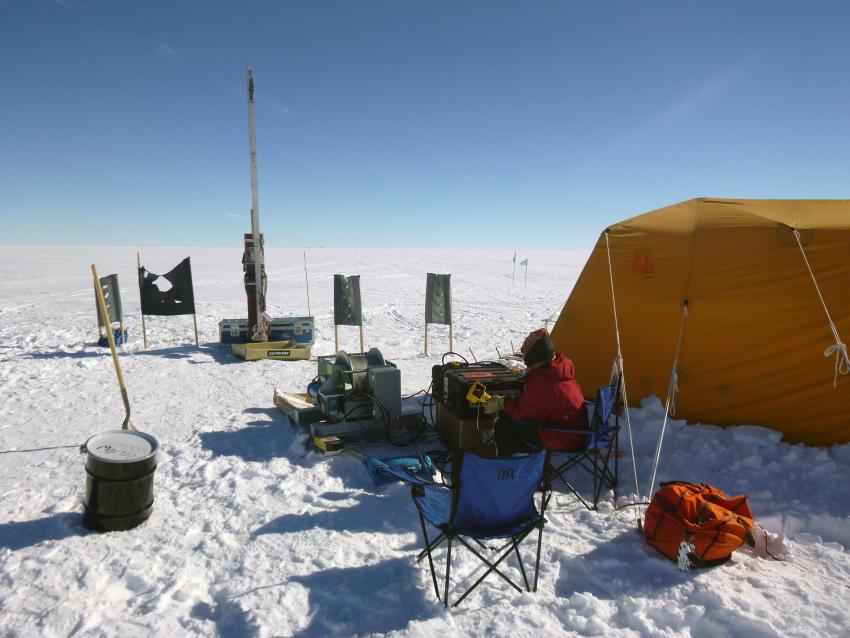 The intermediate depth logging winch in operation at Siple Dome. 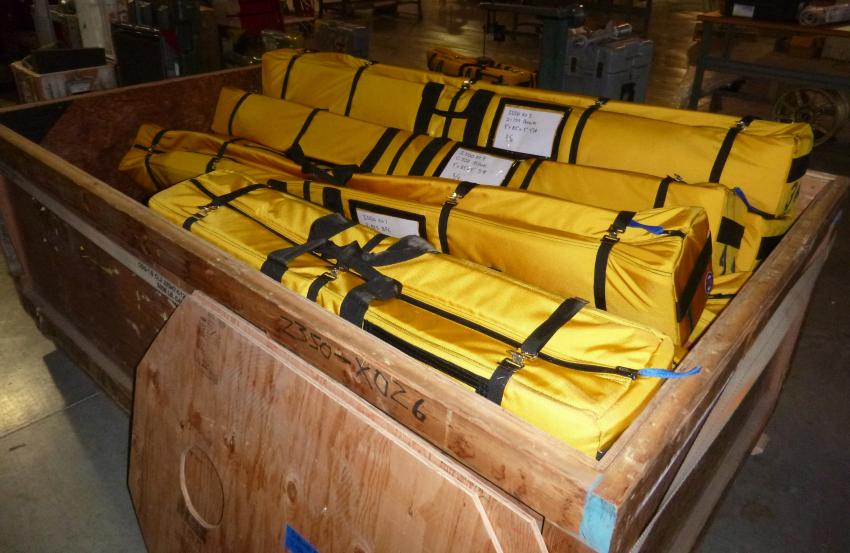 The new IDDO hand auger kits packed and ready for shipment to Antarctica. 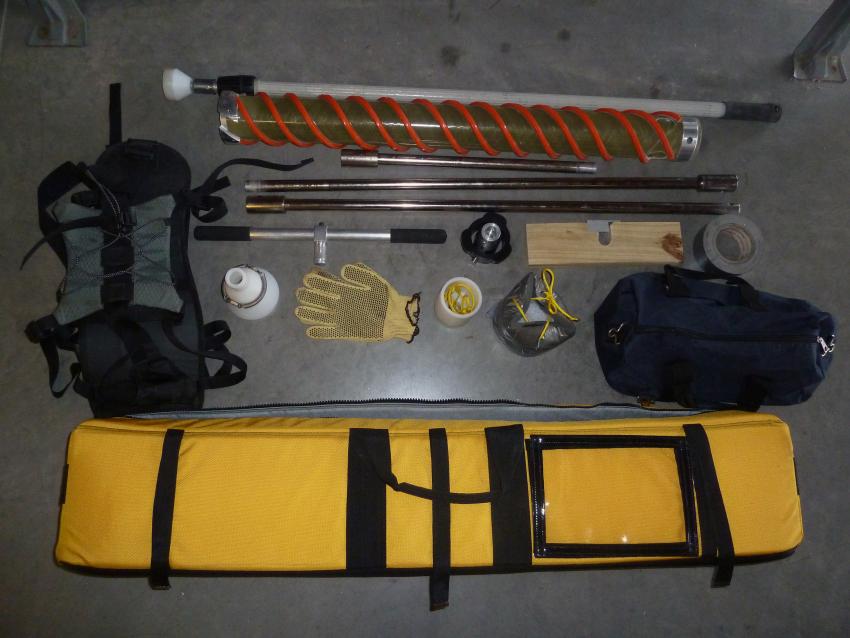 Deep Logging Winch
In the first quarter of PY 2014 (Nov-Jan), IDDO completed the building and testing of a new Deep Logging Winch, capable of reaching the depth of 4,000 meters. At the end of the quarter, the logging winch system required only the completion of the shipping container for the logging tower to be ready for shipment to the field. 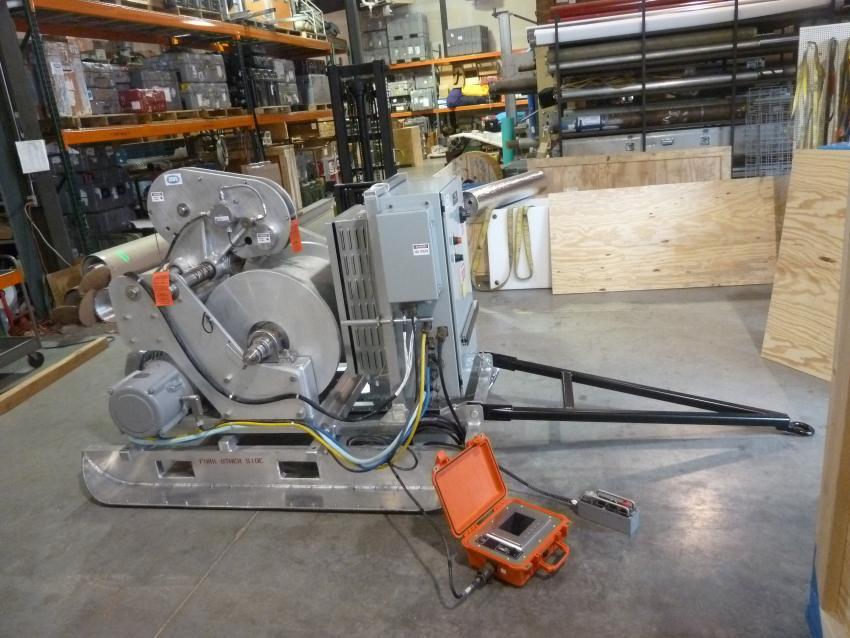 The new deep logging winch for logging boreholes up to 4000 meters deep.

Intermediate Depth Drill
IDDO is in the final stage of the development of a new Intermediate Depth Drill, capable of producing ice cores to depths of 1,500 meters. In the first quarter of PY 2014, the procurement of all system parts and components was nearly completed. At the same time, most major assemblies, including the tower, the winch, and the sonde were completed and partially tested as well. Completion of several of the electronics modules, however, has lagged as the result of the responsibility for remaining design, fabrication and testing being assumed by contract engineers and a contract technician after the resignation of the IDDO staff electrical engineer last fall. After the completion of the system integration test in Madison in March of 2014, the entire system will be ready for a full field test in Greenland during the spring-summer of this year. 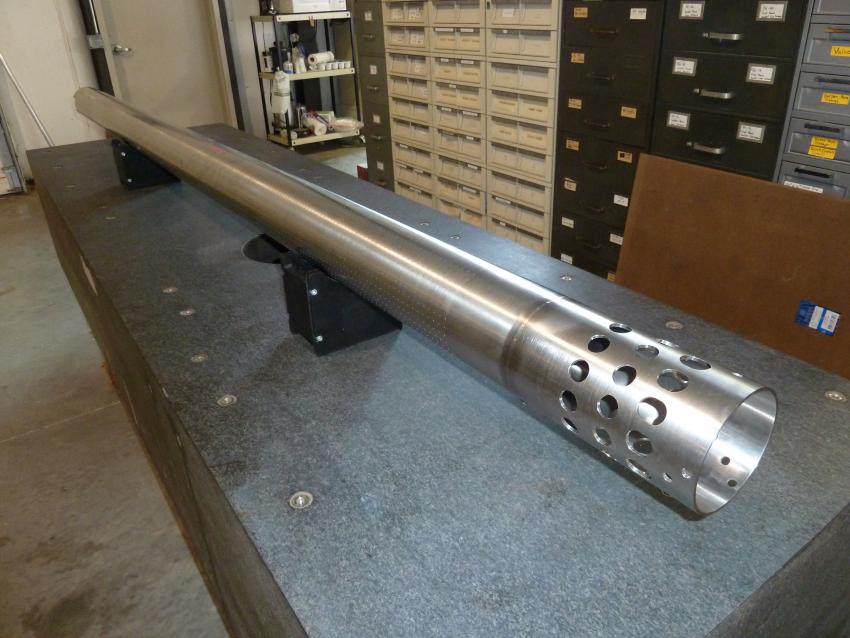 Blue Ice Drill-Deep
The Blue Ice Drill-Deep is a new drill based on the original Blue Ice Drill (BID) with the capability of reaching depths of 200 meters. The design and procurement of all drill parts and components were completed in the first quarter; all major assembly of new subsystems was completed as well. Modifications and repairs to the base BID, the final assembly of the BID-Deep Drill, and the lab testing will be completed after IDDO receives the base BID back from Antarctica. The BID-Deep system will be shipped to Greenland for testing and fieldwork this summer. 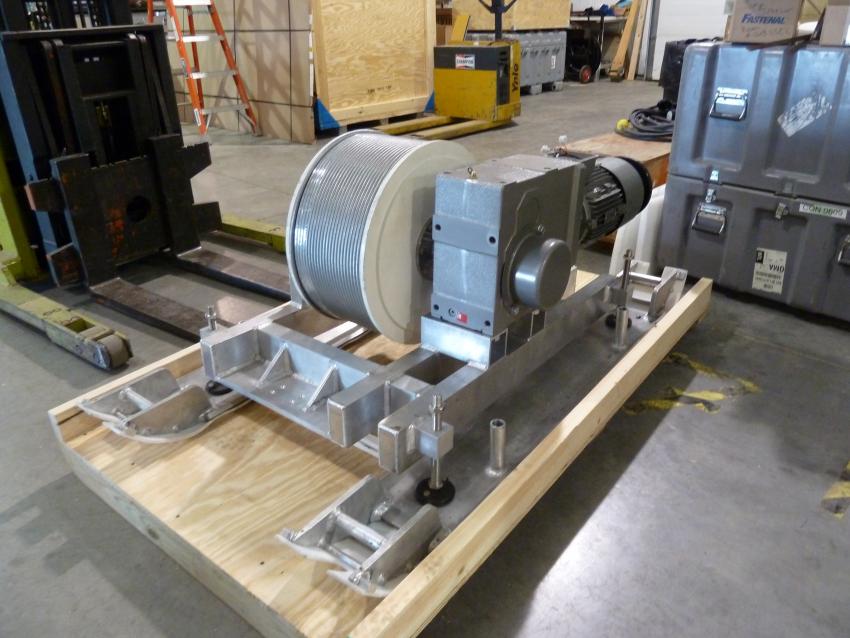 Scalable Hot Water Access Drill
In response to community need for a scalable modular hot water access drill in the Long Range Science Plan, IDDO has started work on a modular hot water drill for the community. This drill will be useful for investigating sub-ice shelf mass balance, ice-ocean interactions, grounding zone processes, and other studies. Mary Albert worked with science community representatives Sarah Das, Dave Holland, and Ted Scambos, and with Chris Gibson, IDDO project manager and engineer and Terry Benson, a University of Wisconsin Engineer with hot water drill experience, through an iterative process to define the science requirements for a hot water drill whose size could be scaled to project needs. The Science Requirements for the Scalable Hot Water Access Drill are available at http://icedrill.org/documents/view.shtml?id=1192. Questions or comments should be sent to Mary Albert.

Agile Sub-Ice Geological Drill
One of the goals for development of new drills identified in the IDPO Long Range Science Plan is the need for agile methods for reconnaissance recovery of small rock cores near ice margins. In response to this, IDPO-IDDO has initiated work on a new Agile Sub-Ice Geological Drill capable of coring up to 10 meters of rock core beneath hundreds of meters of ice. The Science Requirements for this drill were developed in an iterative process led by Mary Albert with community representatives John Stone, Jaakko Putkonen, and Ed Brook, and with IDDO engineer Tanner Kuhl. The Science Requirements are available at https://icedrill.org/equipment/agile-sub-ice-geological-drill. IDPO-IDDO is currently investigating partnership with a small minerals exploration drill manufacturer for development of this drill. The first use of this drill is planned for Antarctic field season 2015-2016 for recovery of rock pieces under several hundred meters of ice. Questions or comments should be sent to Mary Albert.

Agile Ice Coring Drill
In response to the need for an ice coring drill for depths between approximately 400-900 m and that is also agile for use in mountain glaciers and areas with limited logistics, IDPO will be working with community members and with IDDO engineers to develop Science Requirements for the drill. Any U.S. community scientist interested in participating in iterative discussions to identify the requirements should contact Mary Albert at Icedrill@dartmouth.edu.

Under a new Cooperative Agreement between the NSF and Dartmouth, the Ice Drilling Program Office and its partner the Ice Drilling Design and Operations group will continue to lead U.S. science and engineering efforts involving ice coring and drilling. The organization consists of IDPO at Dartmouth with subawards to IDPO efforts at the University of New Hampshire and the Colorado School of Mines, and to IDDO efforts at the University of Wisconsin-Madison.

An April opportunity: Add to your outreach activities by volunteering as a scientist reviewer for IDPO's partner organization, the American Meteorological Society. AMS is seeking an expert to review the scientific content related to ice cores, within the Paleo-climate chapter of their national Climate Studies text. The text is used by professors at community college and 4-year colleges, and will be released soon in an updated, eBook format. AMS will acknowledge any review or editorial assistance provided in the Preface-Acknowledgements section. Information about the text and its associated e-Investigations, etc. is available at:
http://www.ametsoc.org/amsedu/online/climateinfo/textbook.html

If you are interested, please send an email to Linda Morris immediately, at linda.m.morris@dartmouth.edu. 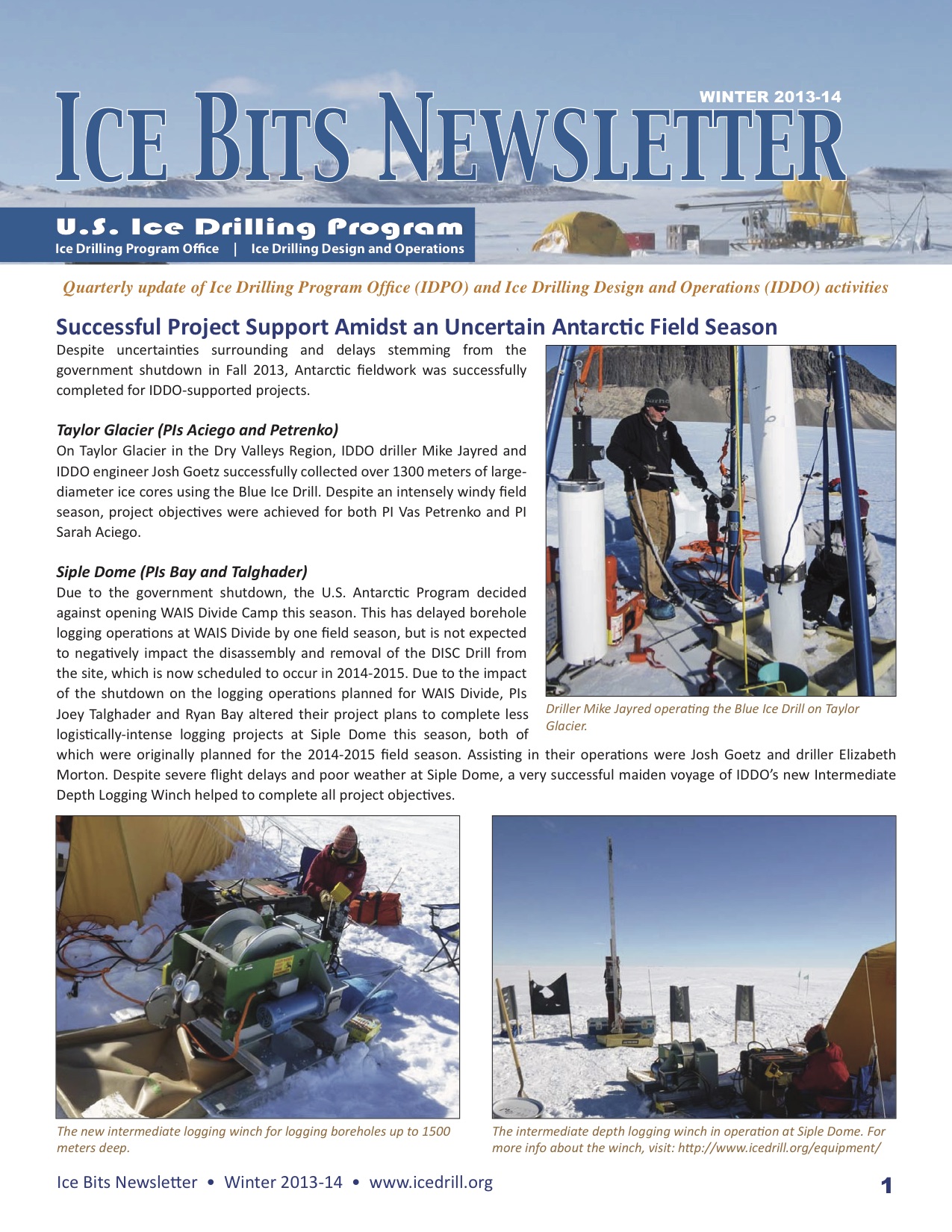