Following the departure of Mechanical Engineer Chris Gibson in January 2021, IDP postponed filling that vacancy until more was known about post-pandemic fieldwork timing and needs. In March 2022, Engineer Grant Boeckmann also departed IDP to take a new position with IDP’s colleagues in Denmark at the Centre for Ice and Climate. To fill these vacancies to accommodate exciting drill development work and prepare for a post-COVID surge in fieldwork, IDP conducted a search and welcomed two new team members in April. Mechanical Engineer Chris Rush started with IDP on April 18, 2022 and has previous experience in the auto and bicycle industries. Mechanical Engineer Barb Birrittella comes to IDP from the UW-Madison Physical Sciences Lab and has prior experience in the polar regions with two deployments to Antarctica. Both Rush and Birrittella are quickly coming up to speed on IDP operations and are assisting with 700 Drill development and integration and testing of pressure relief valve components for the ASIG Drill. After an extensive search, IDP also hired a new Field Support Manager who will start in August 2022. 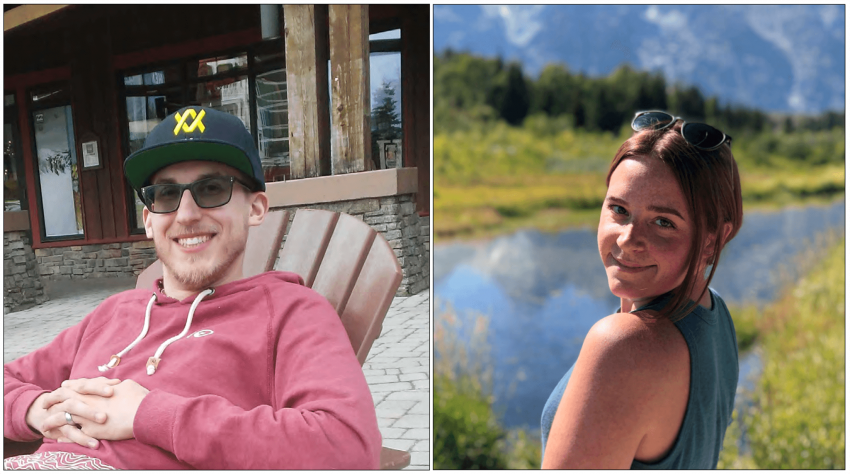 The U.S. Ice Drilling Program is made up of a team of people located at Dartmouth College, the University of New Hampshire, and the University of Wisconsin-Madison (UW-Madison). The team at the UW-Madison consists of engineers and support staff tasked with designing, building, and operating polar ice and rock coring equipment. The team at UW-Madison is small and typically doesn’t have regular vacancies but does occasionally need engineers and/or part-time equipment operators. The UW-Madison team also occasionally hires undergraduate Student Hourly employees and Research Interns (post-undergraduate graduation) to work in Madison, WI, with its engineering team. Feel free to send us your resume, and we will add you to our list of interested participants. We can be reached at IceDrill@Dartmouth.edu. When we have position vacancies, they will be posted on the IDP website at https://icedrill.org/jobs.

The second quarter saw the start of the 2022 spring/summer field season. IDP is providing support to the following projects:

(1) The Climate Drivers and Ancient History in Greenland Ice project (PI Joseph McConnell; NSF award number 1925417) will drill a 400-450 meter long ice core using the Foro 400 Drill from the Tunu region of northeast Greenland. The researchers will analyze the core for a broad range of elements, chemical species, and isotopes to reconstruct climate and human impacts during the past ~4000 years. The goal of this research is to develop accurately dated, high-resolution, ice-core records of a broad range of elements and chemical species to expand and extend recently identified causal linkages between (i) ancient societies; (ii) volcanism and hydroclimate; and (iii) wars, plagues, social unrest, and economic activity.

(2) The Arctic Observing Network for Observing Transformation of the Greenland Ice Sheet Firn Layer project (PIs Joel Harper and Neil Humphrey; NSF award number 2113391 and 2113392) will establish a network of instrumented sites along a transect of the Greenland ice sheet to measure the state and evolution of firn properties. Using the IDDO Hand Auger and Sidewinder, repeat cores will be collected over five years to track density and ice content changes, and instrumentation installed in core holes will monitor firn temperature evolution and compaction of the firn layer. The data from these efforts will be of high value to scientists focused on changes in storage capacity of the firn layer, process details of meltwater infiltration in cold firn, and the influence of firn compaction and melt on satellite-observed ice sheet elevation.

(3) The Chemistry and Biology under Low Flow Hydrologic Conditions Beneath the Greenland Ice Sheet Revealed through Naturally Emerging Subglacial Water project (PIs Kathy Licht and Trinity Hamilton; NSF award number 2039854 and 2039582) seeks to understand the effect of large glaciers on weathering processes beneath the Greenland Ice Sheet and the consequences for life. Nutrients and other products are flushed out of the Greenland Ice Sheet with water from melting ice during summer. While these products have been sampled in spring and summer, it is not known how weathering processes are different during winter. Researchers will use the SIPRE Hand Auger to sample the seasonal ice that forms in front of two of Greenland’s glacial outlets, Isunnguata Sermia and Leverett Glacier, during the freezing months to assess the chemistry and microbiology processes that reflect wintertime conditions beneath the ice sheet – periods when the input of fresh meltwater is minimal. 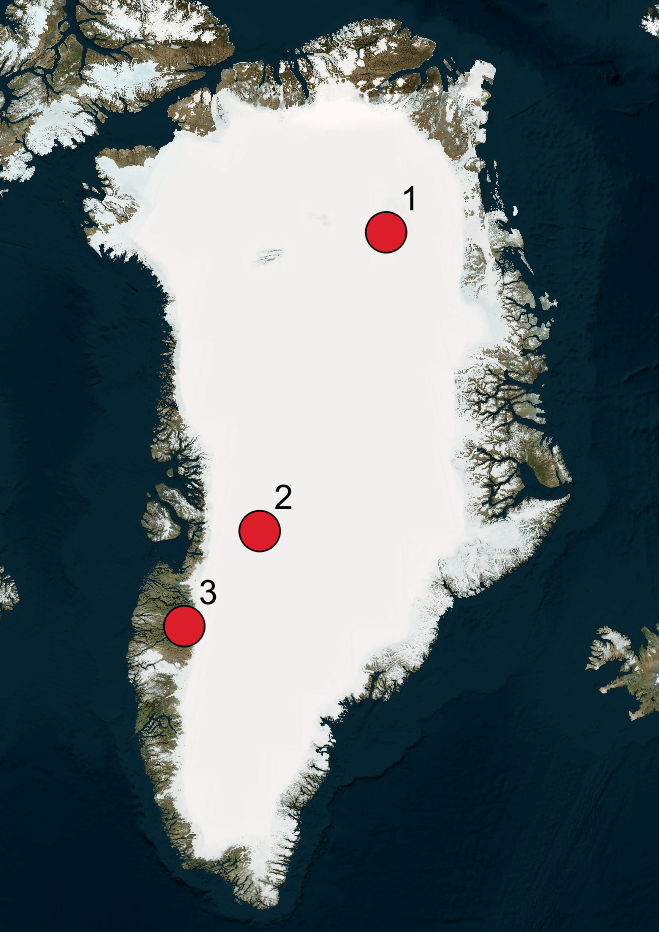 Map of Greenland showing the locations of current and upcoming IDP-supported fieldwork. The numbers shown on the maps correspond to the project numbers in the text.

(4) The Ice Core and Firn Aquifer Studies at Combatant Col, British Columbia, Canada project (PIs Peter Neff and Eric Steig; NSF award number 2002441 and 2001961) aims to recover an ice core at Combatant Col, British Columbia, Canada, to reconstruct hydroclimate variability over the last 500 years. Previous work at Combatant Col demonstrates the preservation of annual stratigraphy, water-isotope, and geochemical records reflecting important climate and environmental variables, including atmospheric circulation, snow accumulation, fire activity, and trans-Pacific dust transport. During the 2022 field season, radar work and shallowing coring using the IDDO Hand Auger will be conducted. During the 2023 field season, a core to bedrock will be retrieved using the Electrothermal Drill. Analysis of the ice core will include water isotope ratios and visual stratigraphy. In combination with high-resolution radar imaging, the core from Combatant Col will be used to determine whether the observed firn-aquifer at this site has been a persistent feature at the site or whether it has formed recently, and to determine its impact on glacier energy balance and dynamics.

(5) The Reconstructing Ancient Human and Ecosystem Responses to Holocene Climate Conditions project (PIs Dave McWethy and Joe McConnell; NSF award number 1832486) will reconstruct Holocene climatic conditions to better understand human adaptation and response to past environmental variability. The assemblages of plant, animal, geologic, and archaeological material emerging from melting ice-patches in higher-elevation areas can provide a wealth of information about past environmental conditions and human use of alpine resources. The investigators will use an array of archaeological artifacts, ancient wood, and environmental and climatic proxies (e.g., oxygen isotopes, black carbon, continental dust, charcoal, and pollen) from ice cores collected from Rocky Mountain ice-patches to better understand human use of alpine environments during periods of dramatic environmental change. The investigators will use the Chipmunk Drill to collect the ice cores. 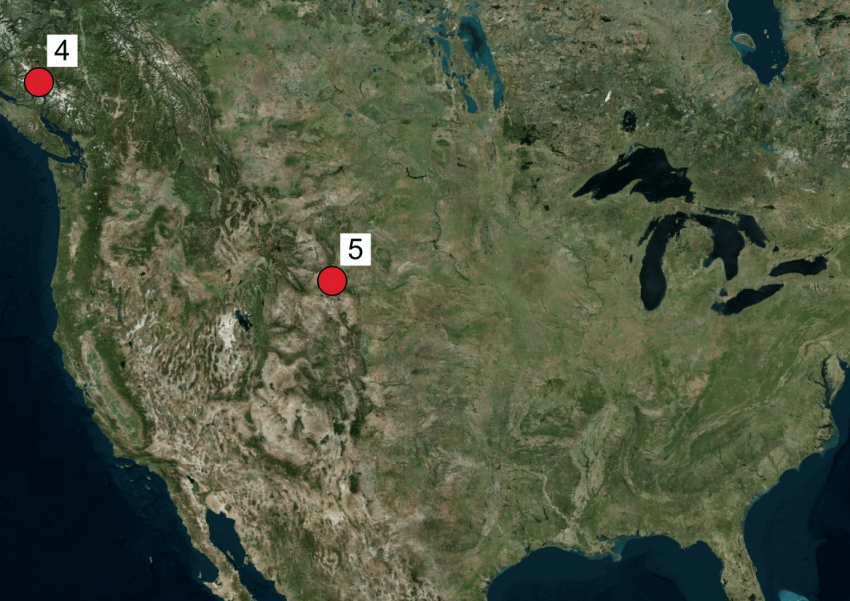 Map of North America showing the locations of current and upcoming IDP-supported fieldwork. The numbers shown on the maps correspond to the project numbers in the text.

(6) The Investigation of High Andean Snow and Ice Chemistry to Improve Paleoclimatic Reconstruction and Enhance Climate Prediction project (PIs Paul Mayewski and Lester Perry; NSF award number 1600018 and 1566450) aims to examine past and modern changes in climate over Peru and Bolivia using snow and ice samples to improve predictions for future climate. This research aims to combine advances in ice core sampling technology, knowledge of Andean storm event meteorology, cyberinfrastructure, and climate modeling and analysis of fresh snow, snowpits, and ice core data from Peru and Bolivia. Using the Thermal Drill, this project will recover approximately 140 meters of snow/firn/ice core from the summit region of Quelccaya. 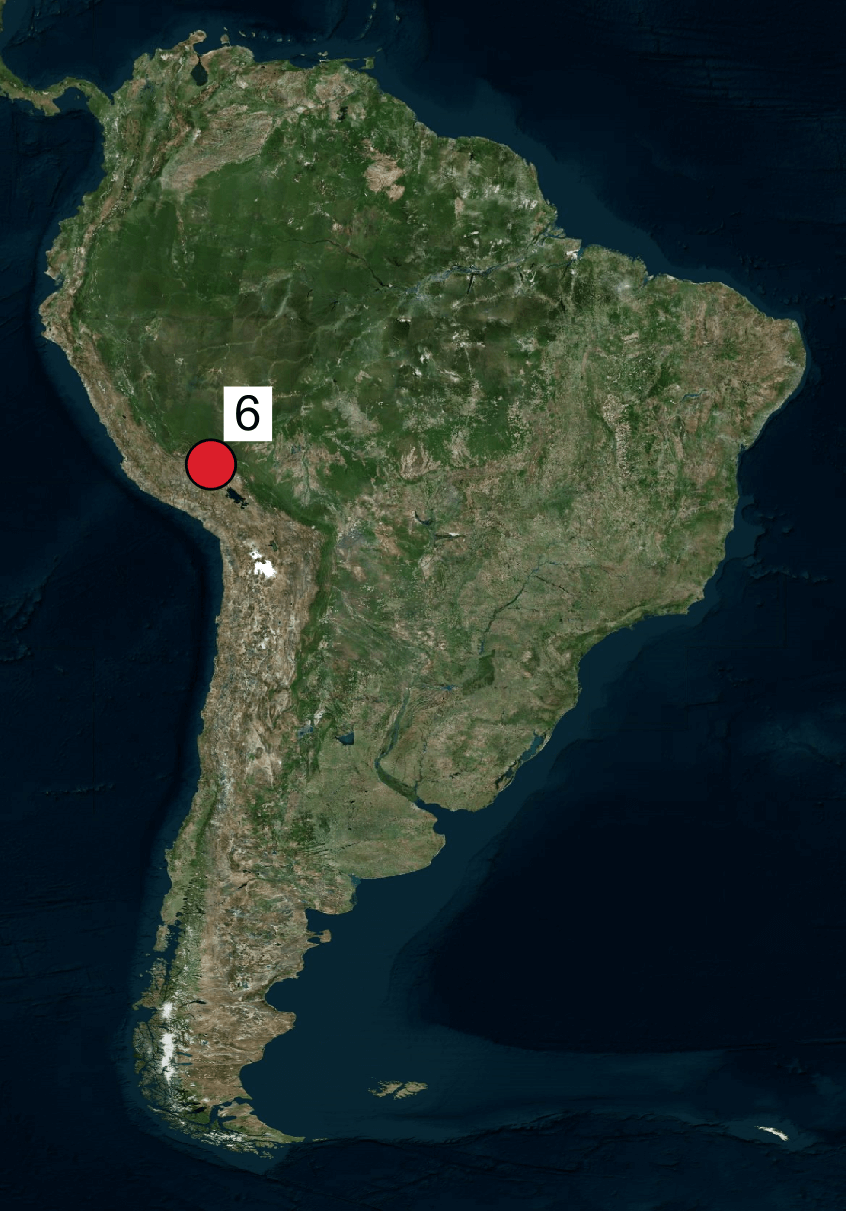 Map of South America showing the locations of current and upcoming IDP-supported fieldwork. The numbers shown on the maps correspond to the project numbers in the text. 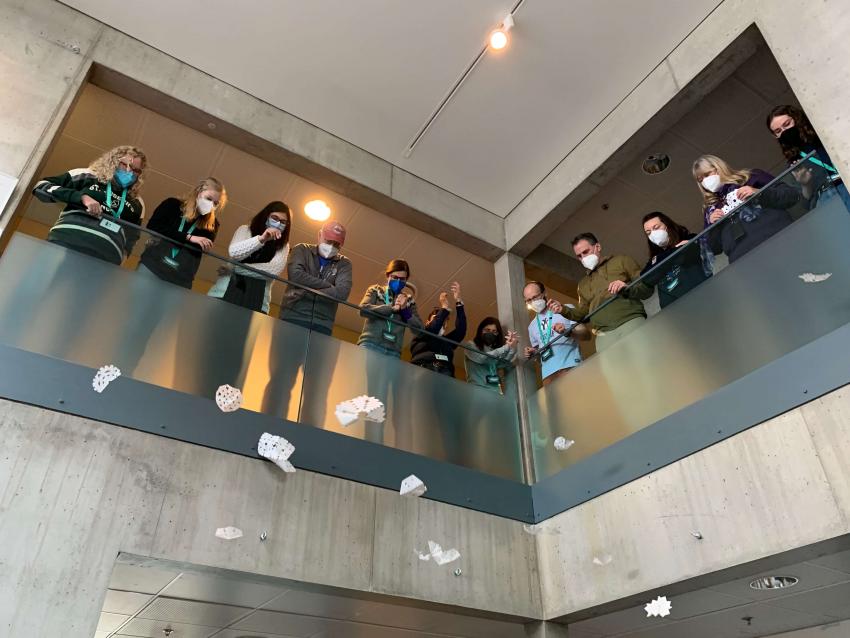 During the second quarter, IDP made the difficult decision to move the Dartmouth School of Ice scheduled for June 2022 to summer 2023 because of growing concern about a COVID resurgence. The concern included the possibility that groups on Dartmouth’s campus could be limited in the summer. 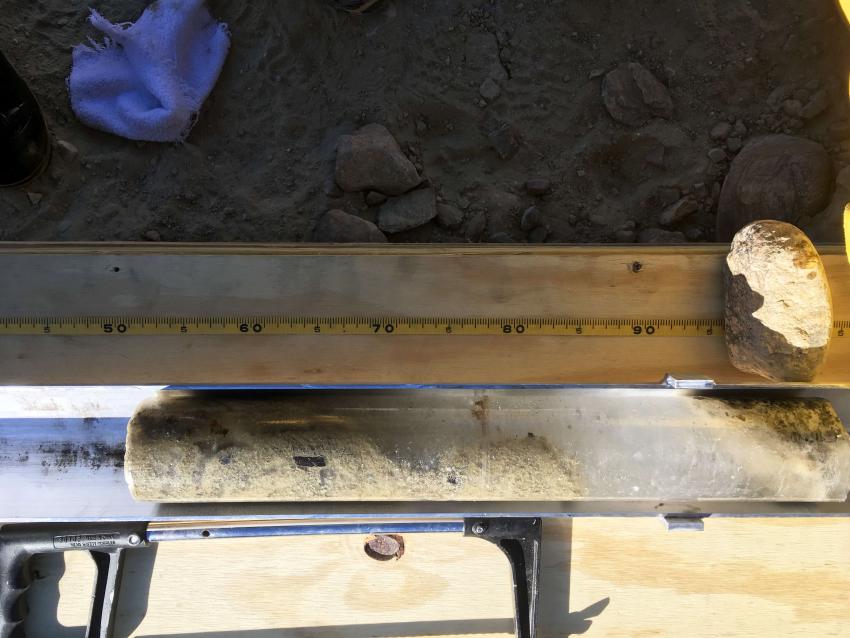 During the 2017/18 Antarctic field season, Jaakko Putkonen & team used the Winkie Drill to recover ancient ice buried under sediments in the Ong Valley floor of Antarctica. Some sections of the ice cores were clear clean ice, others were full of rocks & sediment. Credit: Grant Boeckmann.

A virtual meeting of the Ice Core Working Group (ICWG) was held on February 17 to discuss updates to the Long Range Science Plan and other ICWG business. The presentations made during the February meeting are available on the IDP website. Following the U.S. Ice Core Open Science Meeting, a short hybrid (in-person and online) meeting of the ICWG was also held on May 26 in La Jolla, CA. 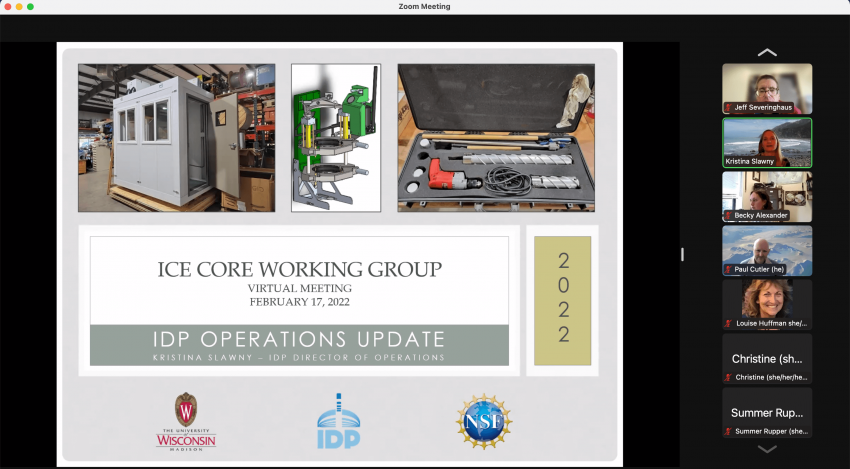 Screenshot of Krissy Slawny discussing updates on IDP Wisconsin operations (drill maintenance and upgrades, drill development, and fieldwork) during the February 17, 2022, Ice Core Working Group meeting. All presentations made during the February meeting are available on the IDP website. 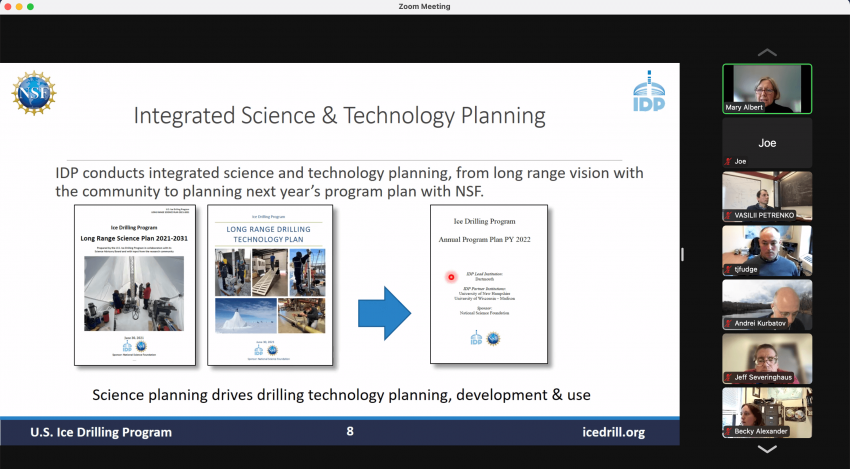 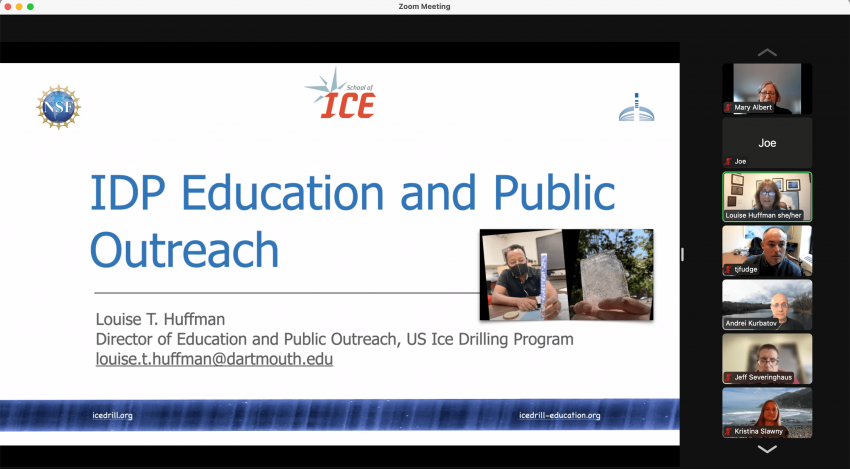 The annual IDP Science Advisory Board (SAB) meeting was held on March 3-4 via Zoom. The meeting included updates from NSF and IDP and the following SAB working groups: Ice Core Working Group and Subglacial Access Working Group. SAB members also discussed draft updates for the IDP Long Range Science Plan and prioritization of drilling technology developments. The presentations made during the meeting are available on the IDP website.

Acknowledgment of IDP in Publications

If you receive any support from IDP, we kindly request that you acknowledge IDP in any resultant publications or articles with the following statement: “We thank the U.S. Ice Drilling Program for support activities through NSF Cooperative Agreement 1836328.” If you have any questions, please contact us at IceDrill@Dartmouth.edu.

If you are preparing a National Science Foundation (NSF) proposal that includes any kind of support from IDP, you must include a Letter of Support from IDP in the proposal.

Researchers are asked to provide IDP with a detailed support request three weeks prior to the date the Letter of Support is required. Early submissions are strongly encouraged.

Although there are no proposal deadlines for the Antarctic Research and Arctic Research solicitations, NSF advises researchers to submit proposals 18 months in advance of their potential deployment date.

Scientists who seek to include IDP education and outreach activities associated with U.S. ice coring or drilling science projects should contact Louise Huffman at Louise.T.Huffman@Dartmouth.edu during their proposal preparation stage.

For further information on requesting IDP support, visit our website at https://icedrill.org/requesting-field-support or contact us at IceDrill@Dartmouth.edu. 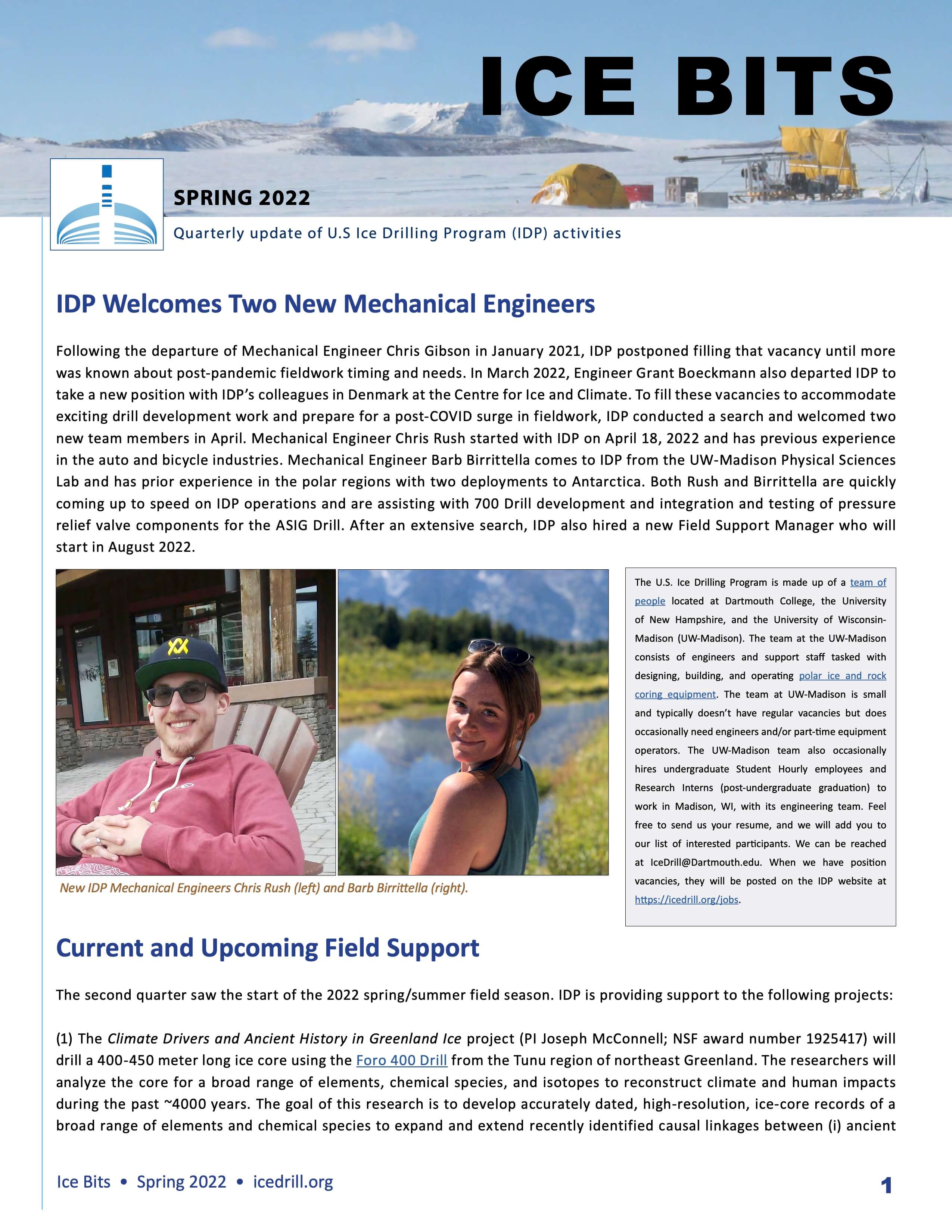