IDPO is once again organizing a Town Hall meeting at the 2011 Fall AGU Meeting entitled "Scientific Drilling in the Polar Regions". ANDRILL and SCAR-ACE are co-sponsors of the event. Presenters at this meeting will report on recent planning from the IDPO/IDDO, IPICS, ANDRILL, IODP, SCAR-ACE, SHALDRIL, WAIS, and Arctic Ocean drilling initiatives, and will provide time to discuss current opportunities for community involvement in long-term interdisciplinary planning. The workshop is on Thursday, December 8 from 12:30-1:30 PM in the Moscone West, Room 2006. Please check the 2011 Fall AGU Meeting web site for more information (http://sites.agu.org/fallmeeting/).

During the 2011-2012 Antarctic field season IDDO will provide drilling support for three projects: (1) the WAIS Divide Ice Core project (PIs Taylor and Severinghaus) will possibly continue deep coring with the DISC Drill and will also test the new Replicate Coring System; (2) the Taylor Glacier Cores project (Severinghaus, PI) will continue to use the Blue Ice Drill to collect large volume samples of ice from the Taylor Glacier ablation zone for studies of the past atmosphere; and (3) the Whillans Ice Stream project (Winberry, PI) will use a portable hot water drill to create the shot holes for seismic work to investigate the physical conditions at the base of the ice stream.

In addition, several new components, including a split ring collet and new cutters, for the Badger-Eclipse drill have been developed and will be field-tested at WAIS Divide this season. IDDO also plans to field-test two newly-designed 3-inch hand augers during the 2011-2012 Antarctic field season: one at WAIS Divide and on sea ice at McMurdo Station, and the other at Taylor Glacier to see how it performs in ice. 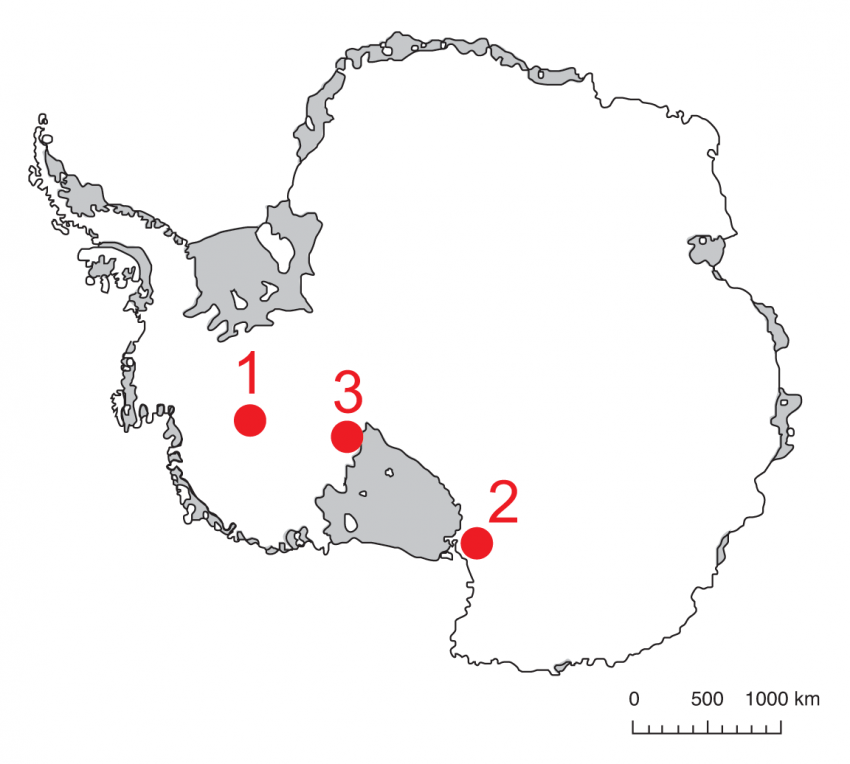 Map of Antarctica showing 2011-2012 field season drilling locations. The numbers shown on the map correspond to the project numbers in the text.

Development of an Intermediate-Depth Drill capable of retrieving cores to 1500 meters depth is underway. IDDO is undertaking the design and construction of the drill, based on the Hans Tausen drill, in cooperation with the Centre for Ice and Climate in Copenhagen, Denmark, who will provide drawings and technical information on the Hans Tausen drill to IDDO. While complete drawings do not exist, IDDO expects to complete the detailed design by the end of calendar year 2012, with an aim to have an operational, tested drill by the end of FFY2014, in time for deployment to Antarctica for the 2014-15 field season. The science requirements can be viewed/downloaded at: http://icedrill.org/library/us-plans.shtml#sciencerequirements

Acquisition of logging winches for the borehole logging community is one of the high-priority items identified in the Long Range Science Plan (http://icedrill.org/scientists/scientists.shtml#scienceplan). Through many discussions with the borehole logging community, a set of science requirements for an intermediate-depth winch have been developed. The intermediate-depth winch will be capable of logging holes 1200-1500 m deep, operate at temperatures as low as -45 degrees C, transportable by a single Twin Otter flight, and is intended for general community use. IDPO Science Advisory Board member Ryan Bay will serve as the science community user contact for IDDO as they pursue acquisition of the winch. The science requirements can be viewed/downloaded at: http://icedrill.org/library/us-plans.shtml#sciencerequirements

During the April 2011 Ice Drilling Science Community Planning Meeting, the need for a rapid access ice drilling (RAID) system was articulated. The objective behind the RAID system is to drill through 4 kilometers of ice in a week, taking pieces of ice core along the way, and then recover bedrock core. Such a drill has long been desired by the glaciology and geology communities; after the April workshop, John Goodge (University of Minnesota-Duluth) asked for IDPO/IDDO assistance in generating information that could support a Major Research Instrumentation (MRI) proposal for a RAID drill that he will submit in January 2012. In October, IDPO held a meeting in Madison, WI attended by scientists John Goodge and Jeff Severinghaus (UC-San Diego), IDDO engineers, industry experts, and IDPO to discuss possibilities and tradeoffs of technologies associated with development of a RAID system. This set the stage for IDDO work on the conceptual plan for a RAID system this fall. The science requirements, initially compiled during the April 2011 IDPO Community Planning workshop, have been subsequently refined by John Goodge and Jeff Severinghaus as part of the scientist-engineer-logistics discussions in biweekly IDPO-organized webteleconferences following the October meeting. Using the input provided by IDPO/IDDO, John Goodge will submit an MRI proposal in January 2012 for construction of the drill. 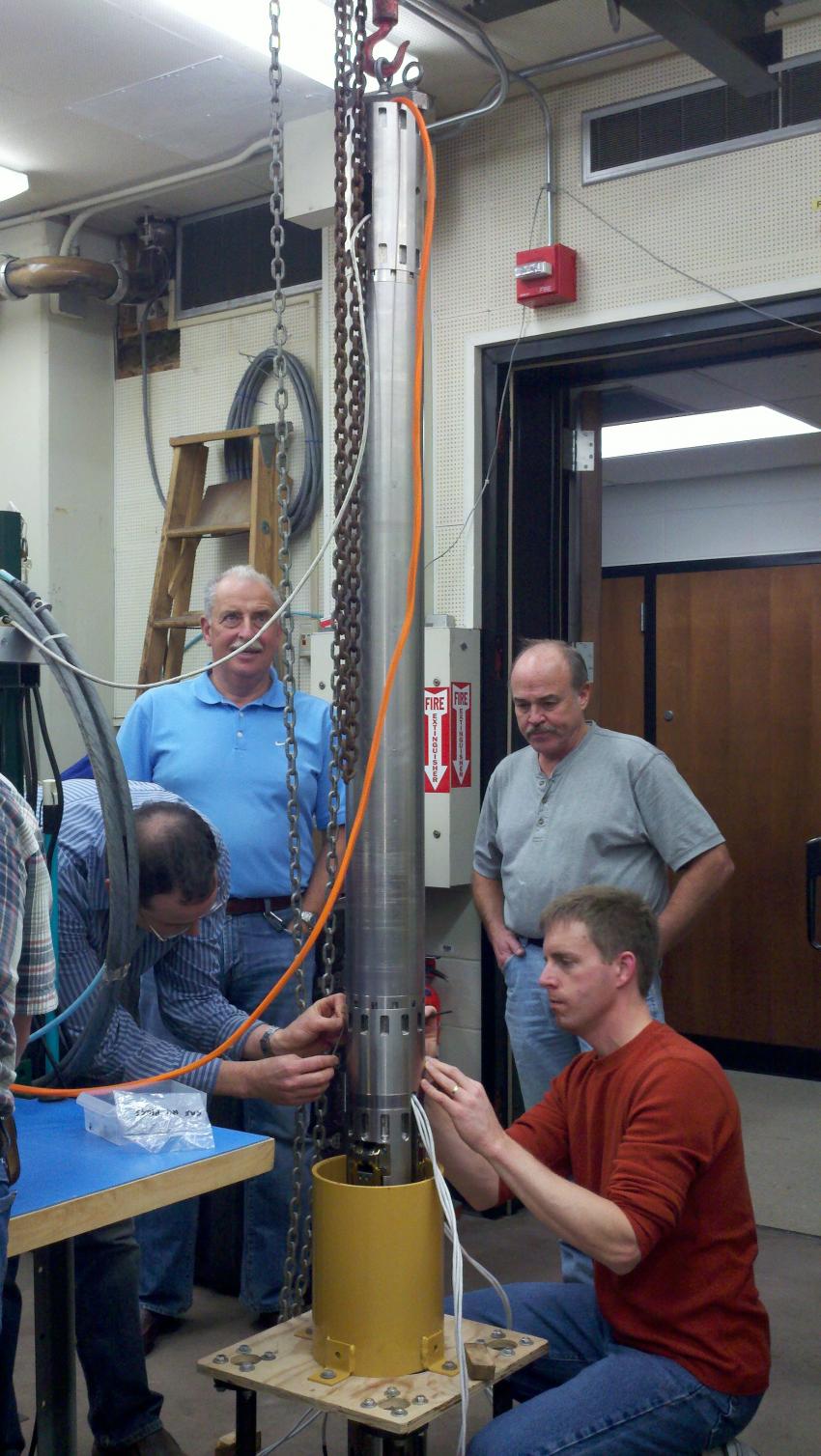 Testing of the Replicate Coring System in the lab. 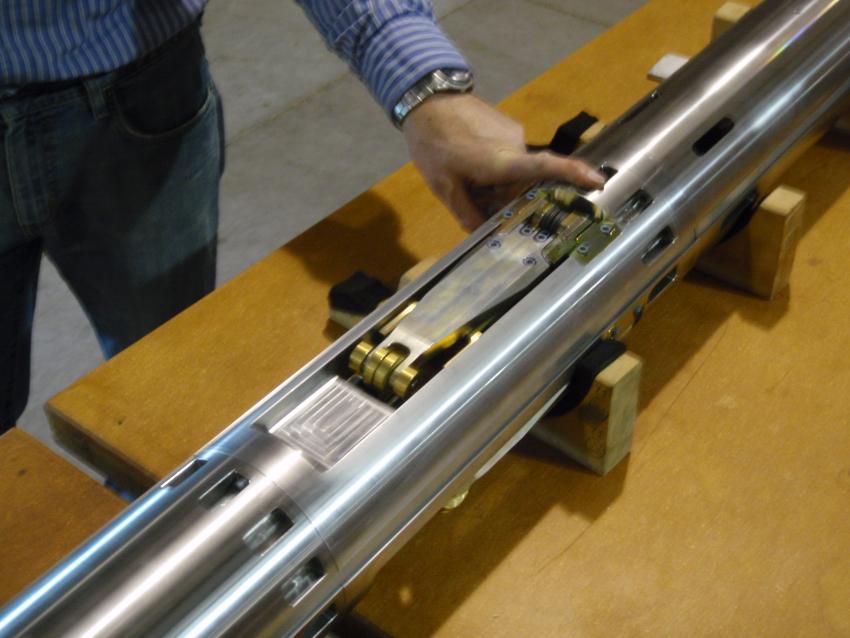 The U.S. Ice Drilling Program is now on Twitter! In addition to our IceDrill.News electronic mailing list and our RSS newsfeeds, we will now also announce all of our news, deadline reminders, meeting announcements, and requests for community feedback on science requirements for equipment under development/procurement via our Twitter account at:
https://twitter.com/US_IceDrilling 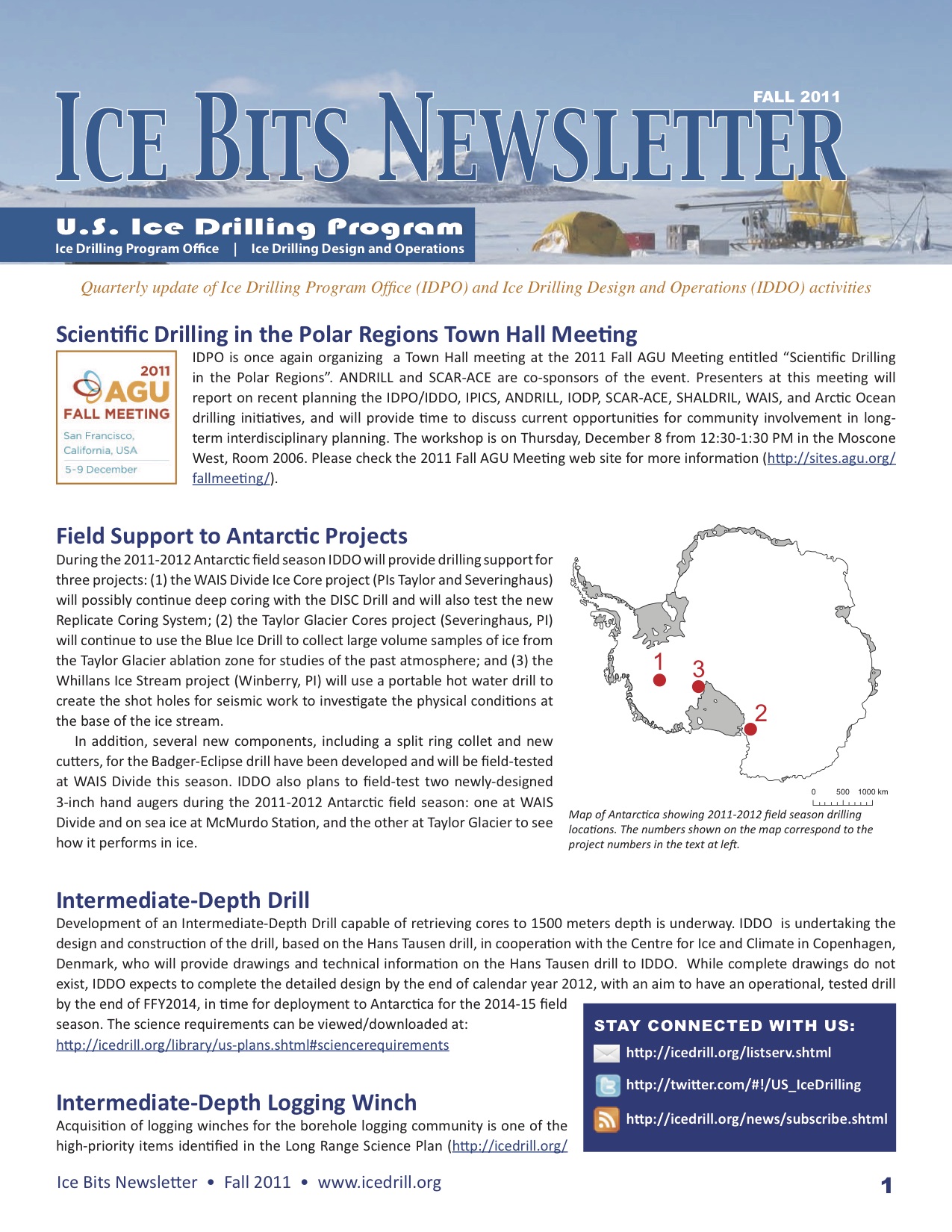