The U.S. Ice Drilling Program Office (IDPO) is once again organizing a Town Hall meeting at the Fall AGU Meeting entitled 'TH43G: Scientific Drilling in the Polar Regions'. Ice sheets and the underlying bedrock and sediment and permafrost hold crucial evidence of past climate and cratonic geology. National and international collaboration for drilling in the remote polar regions requires strategic coordination between science, technology, and logistics. This town hall will provide the research community with updates on IDPO-IDDO, IPICS, RAID, and WISSARD initiatives. Opportunities for community involvement will be showcased, and input from the audience will be solicited.

Scientific discoveries achieved from, within, and beneath the Greenland and Antarctic ice sheets, ice caps and valley glaciers are critical to society today, but large group endeavors are not achieved without significant advance planning. What is your vision for future subglacial science? The U.S. Ice Drilling Program Office (IDPO) is hosting an interdisciplinary science community-planning workshop to identify the science drivers, targets, and timelines of subglacial access drilling for the coming decade. The goal of this workshop is to form consensus within the U.S. science community on scientific goals, potential drilling targets, and proposed dates and timelines for major science projects that will require subglacial access drilling over the coming decade, possibly in joint endeavors with international partners. This information will be used in the 2016-2026 update of the IDPO Long Range Science Plan, which is the foundation for identifying and developing appropriate drilling technologies for use in larger projects defined by the U.S. science community. This workshop will be held on January 21-23, 2016, at the Washington Dulles Marriott Suites Hotel in Herndon, VA. All interested scientists who will be seeking science funding from a U.S. agency are encouraged to participate, including, but not limited to, those from the fields of glaciology, paleoclimatology, glacial geology, biology, and earth science. Scientists should come to the meeting prepared to summarize scientific research questions to be addressed by subglacial drilling in the coming decade, and to identify likely target areas, technologies needed, and timelines for completion of projects that they are likely to propose in the near-term or long-term future.

More information is posted, along with the online registration form, at https://icedrill.org/meetings/subglacial-access-drilling-idpo-science-planning-workshop. Attendees should register at this site. 10-minute presentation slots are available in the agenda for participants interested in "making the case" for specific future subglacial drilling projects. Please indicate your interest in making a brief presentation in the registration form. We will send registered participants updates on the agenda and details of the meeting. Feel free to send comments to us at Icedrill at Dartmouth dot edu, or contact one of us directly.

Background Information:
The current IDPO Long Range Science Plan for the ice coring and drilling community is available for download on www.Icedrill.org; we update the plan every year in June. This plan drives the NSF budget for U.S. ice drilling activities. We encourage scientists to work with IDPO to forecast your science plans over the next decade -- this enables us to ensure that the ice drilling technology will be ready when needed by your science.

Outcomes from this workshop will be directly incorporated into the IDPO Long Range Science Plan. Specifically, discussions from this meeting will be reflected in the science descriptions, timeline and planning matrices in the Long Range Science Plan, and will be used to identify drills, platforms and logistical support needed to achieve the science. We hope that you and your colleagues will join us in this planning.

May 2016 looks to be an exciting month for those seeking professional development related to the role of ice core research in climate education. In its second year, the Lockheed Martin-funded "School of Ice", developed by the U.S. Ice Drilling Program Office in partnership with the American Meteorological Society's education program, is actively seeking qualified candidates for the four day, Denver-based, residential course on ice core science. If you or your colleagues teach environmental and/or geoscience courses at a community college, undergraduate institution or university classified as a Minority-Serving Institution, this experiential week may be just for you!

The calendar dates are May 22-26, 2016. Information on course content is available from Linda Morris at linda.m.morris at dartmouth dot edu. Application materials can be accessed online at http://goo.gl/forms/HvHqFjizVy or contact Elizabeth Mills at mills at ametsoc dot org to receive them by email. Come join us! 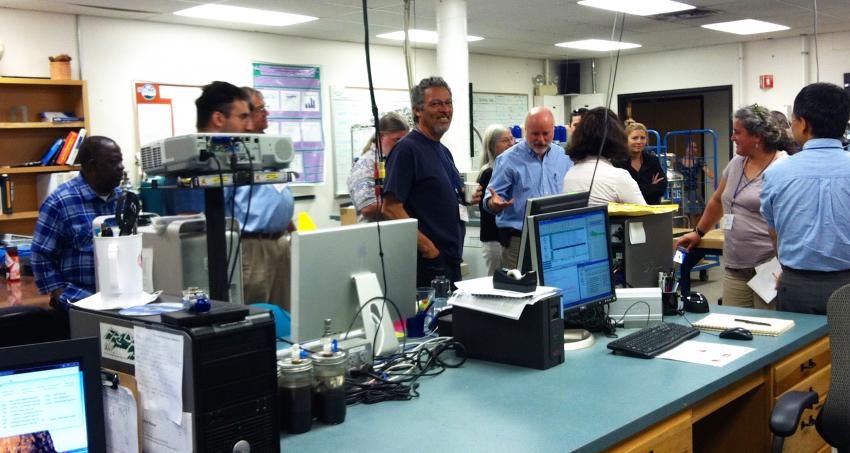 During the 2015-2016 Antarctic field season, IDDO is providing support to the following projects:

(1) the South Pole Ice Core project (PI Murat Aydin; I-164-S) will continue its use of the Intermediate Depth Drill to collect a 1500 meter ice core. The ice core will provide an environmental record spanning approximately 40,000 years that will be used to investigate the magnitude and timing of changes in climate and climate forcing through time. The target of 40,000 years spans the transition from the peak of the last glacial period when ice sheets were at their maximum extent – referred to as the Last Glacial Maximum – to the present warm period (the Holocene) called an interglacial. One of the primary motivations for collecting an ice core from the South Pole is that it will provide one of the best trace gas records possible due to the very cold temperatures and low impurity levels at the South Pole. In addition to providing the Intermediate Depth Drill for the project, IDDO is also providing seven drillers to operate the drill throughout the season.

(2) the South Pole Firn Air project (PI Jeff Severinghaus; I-191-S) will use a Badger-Eclipse Drill to incrementally drill two 3-inch diameter holes to 130 meters depth for firn air sampling near the South Pole Ice Core project (PI Murat Aydin; I-164-S) drill site. The primary objective of the project is to construct the gas chronology for the South Pole ice core using inert gases (d15N, d40Ar) and methane in combination with a next-generation firn densification model. Reconstruction of the inert gases and methane in the South Pole ice core will improve the dating of the ice core record, to unprecedented precision, which will enhance the overall scientific return from the ice core.

(3) the Climatic and Glaciological Controls on the Formation of High-Altitude Ablation Moraines project (PI Kathy Licht; G-095-M) will use a hand auger to collect short ice cores from the Mt. Achernar, Transantarctic Mountains, region to recover ice for visual inspection and various types of isotopic analysis. The primary objective of the project is to gain an improved understanding of processes and rates of blue ice moraine formation, as well as identifying the topographic, glaciological, and climatic controls on their evolution. Field data related to ice motion and internal stratigraphy will be collected and used as part of a baseline dataset for a numerical model.

(4) the Crary Ice Rise Shot Holes project (PI Howard Conway; I-323-M) will use an IDDO provided small hot water drill to create shot holes for subsequent seismic work. The project aims to understand the dynamics of ice rises – grounded islands within ice shelves – as they result in a major resistive force on ice flowing from the grounded ice sheets into the ocean. An integrated collection of geophysical observations, including radar and active source seismic experiments, on both the Crary Ice Rise and across its grounding line will be used to address questions about how the ice rise affects ice discharge from the Ross Sea sector of West Antarctica.

(5) the RAID Auger and Packer Test (PI John Goodge; D-551-M) will use a variety of IDDO equipment to test whether a critical component of the Rapid Access Ice Drill (RAID) system, a rubber packer designed to make a seal against the ice borehole wall, functions adequately in natural, glacial ice. A second goal is testing whether an auger can successfully make a hole all the way through the firn layer, which is the intended method of drilling through the firn for RAID operations.

(6) the Carbon-14 of Atmospheric Methane project (PI Vas Petrenko; I-159-M) project will continue its use of the specialized Blue Ice Drill to collect large-diameter ice cores from the blue ice zone on Taylor Glacier that span the last deglaciation and the Early Holocene. The scientists require large-diameter ice cores to extract enough methane to analyze for the rare carbon-14 isotope of methane. The methane analyses will help pinpoint the source(s) of the greenhouse gas during past abrupt climate changes, and will also help scientists understand how modern-day sources of methane may respond to a warming world.

(7) the Climate Controls on Aerosol Fluxes in Taylor Valley project (PI Sarah Aciego; I-184-M) will use the Blue Ice Drill to collect one ice core to a depth of 20 meters for subsequent analysis of dust concentration, dust size distribution, bulk major elements, bulk trace elements, and radiogenic isotope composition. These measurements will be used to deduce the changing climate of the Taylor Dome area from the Last Glacial Maximum through the Holocene.

(8) the Allan Hills Blue Ice Area project (PI John Higgins; I-165-M) will use a Badger-Eclipse Drill to drill one 150 meter depth ice core and one 200 meter depth ice core, as well as several shallow ice cores with a hand auger, to build on recent studies of ancient ice from the area. Previous studies from the area have obtained ice extending, discontinuously, from 0.1 million years ago (Ma) to one Ma. The climate records developed from the newly drilled ice cores will provide new insights into the chemical composition of the atmosphere and Antarctic climate during times of comparable or even greater warmth than the present day. 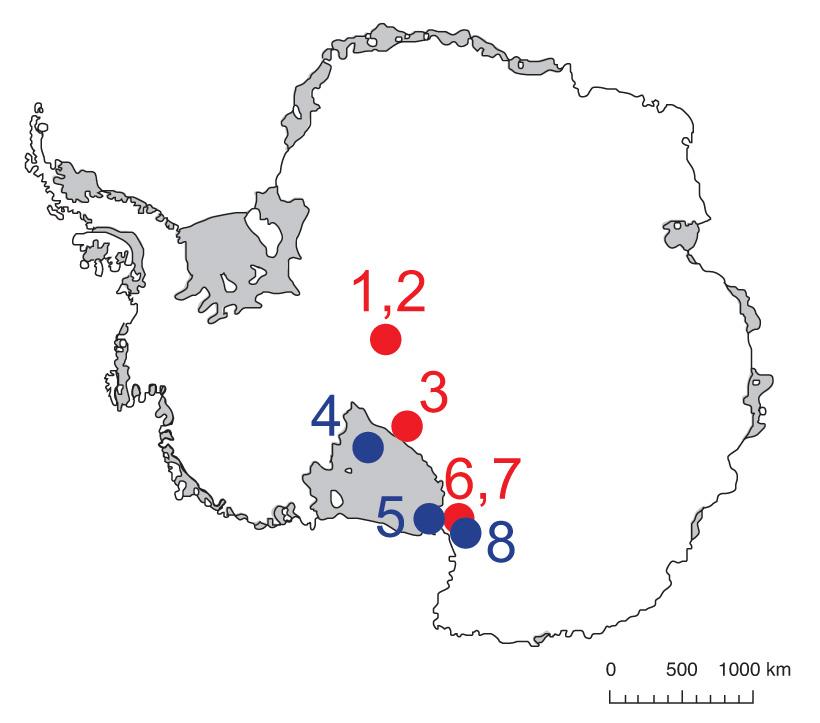 Map of Antarctica showing IDDO 2015-2016 field season locations. The numbers shown on the map correspond to the project numbers in the text.

IDDO held its annual Technical Advisory Board (TAB) Meeting in Madison, WI, on September 14-15, with drilling experts from all over the world and from a wide variety of fields. IDDO presented on the current status of IDDO field projects, equipment development projects, and equipment maintenance and upgrade efforts. As with each TAB meeting, IDDO gained very valuable feedback from board members on equipment development projects, ideas regarding new technologies in ice drilling and other fields, as well as input on field project logistics. Notes from the meeting are available at https://icedrill.org/about/tab.shtml. 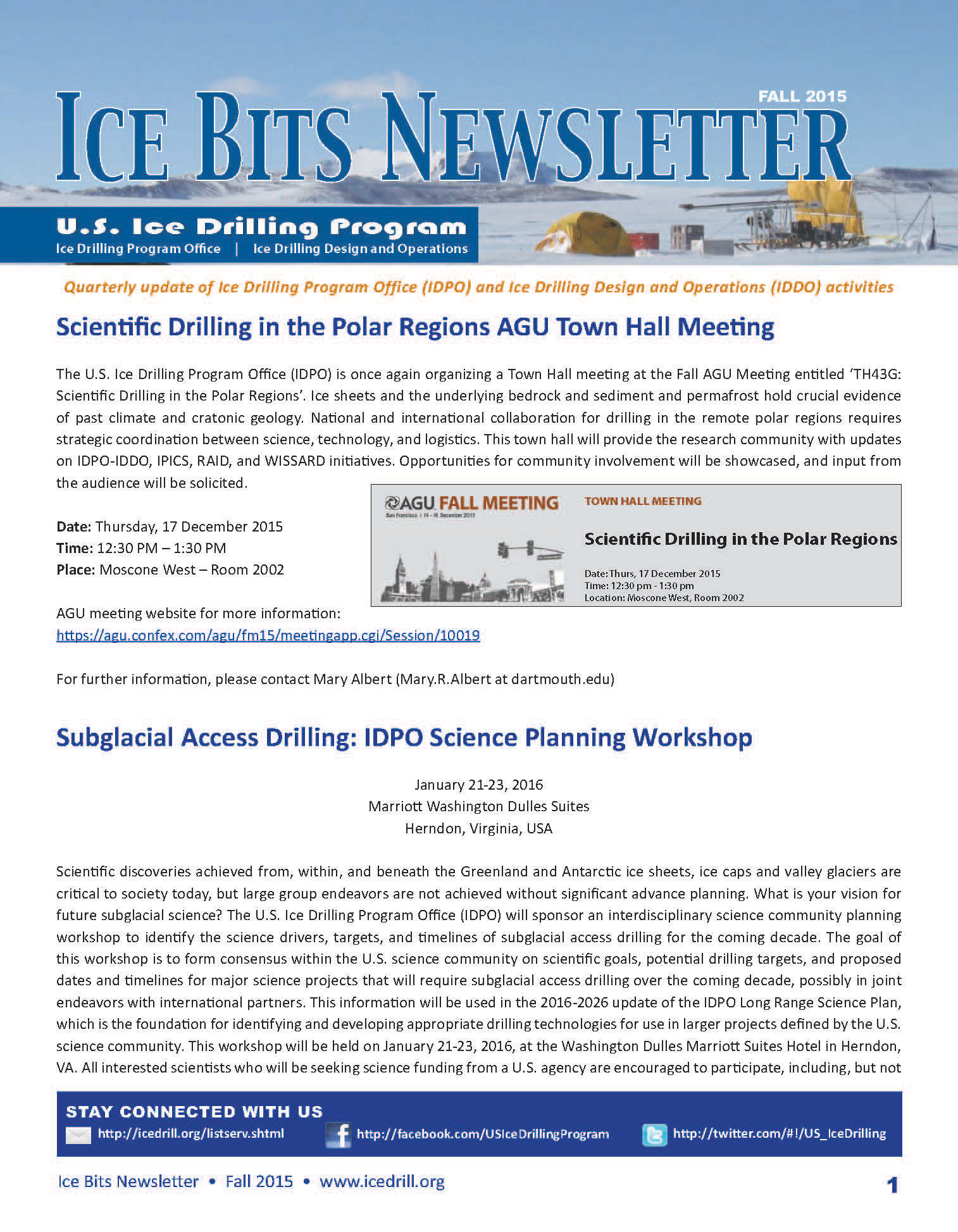