With the exception of Hand Auger and Sidewinder kits shipped from Madison, WI in late August, all IDDO cargo prepared for the 2016-2017 field season was successfully loaded onto one full flatbed truck on September 16, 2016 with only inches of room to spare. A number of field projects will be supported across Antarctica through use of a 4-Inch Drill system, IDDO's Intermediate Depth Logging Winch and Deep Logging Winch, components of the Intermediate Depth Drill system, and by IDDO's newest sub-glacial rock coring equipment, the Agile Sub-Ice Geological (ASIG) Drill and the Winkie Drill. Engineers and drillers will begin deploying in early November 2016. 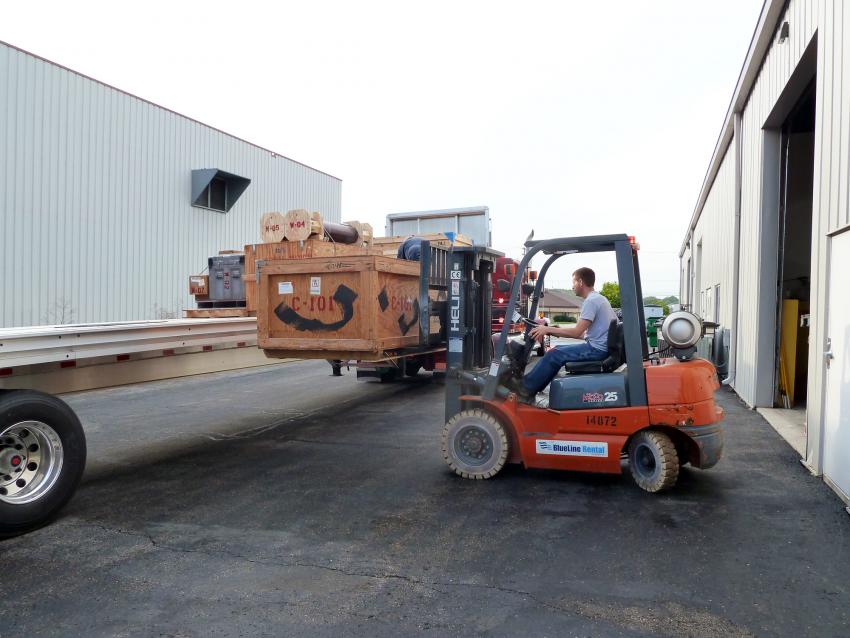 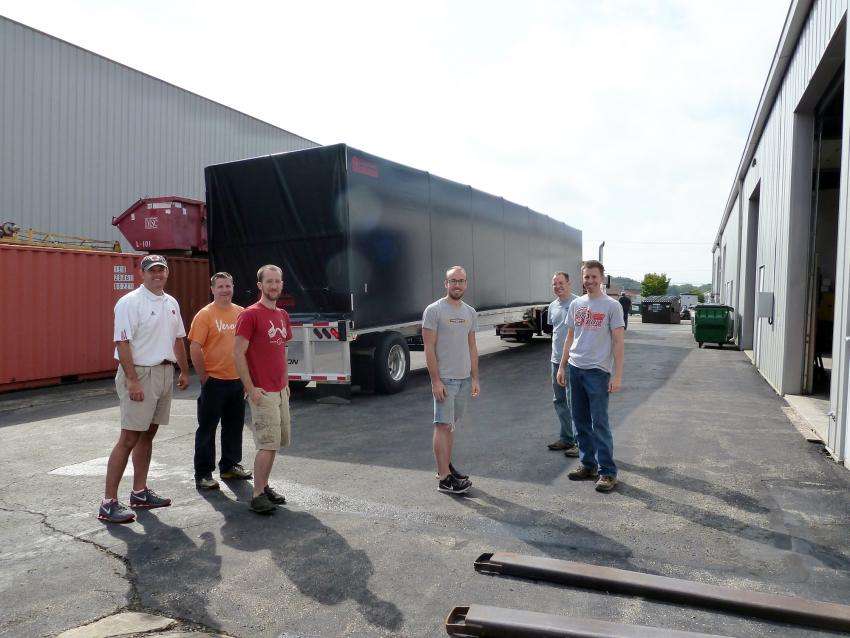 A happy IDDO team in front of the fully-loaded Conestoga trailer. Credit: IDDO 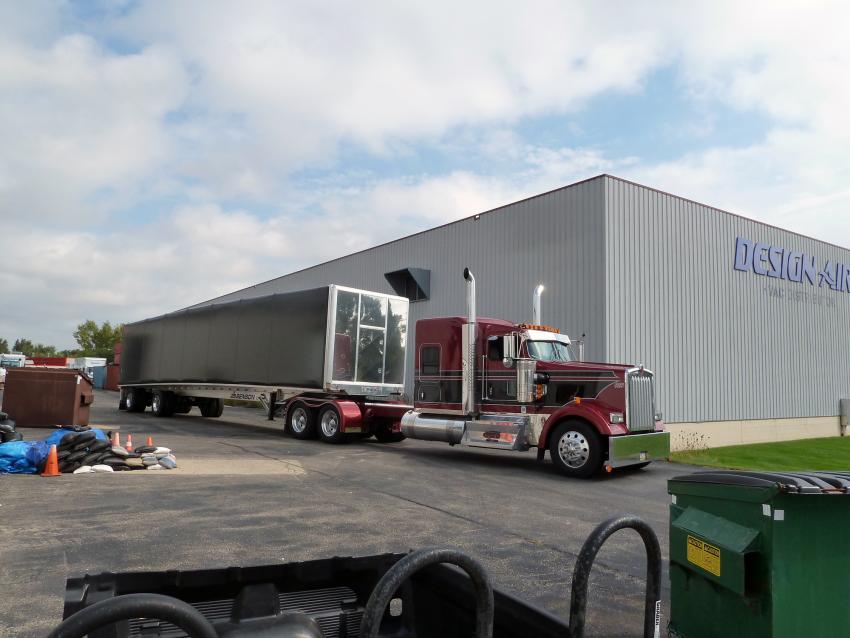 During the 2016-2017 Antarctic field season, IDDO is providing support to the following projects:

(1) the South Pole Ice Core project (PI Aydin; I-164-S) will conclude its operations near South Pole Station. IDDO personnel will assist with shipping of all remaining ice cores (616 meters) from South Pole to McMurdo Station, and will disassemble the remaining drill equipment, core handling equipment, and drill tent, and prepare those items for retrograde to the US.

(2) the Laser Dust Logging and Fluorimetric Scanning of SPICE project (PI Bay; I-194-S) will use the Intermediate Depth Drill winch, cable, and tower – which is currently onsite at South Pole – to log the South Pole Ice Core (I-164-S) borehole with an oriented laser dust logger. The data from the borehole probe will be used to investigate the depth-age relationship in the South Pole Ice Core, to identify ash layers, and to investigate ice flow and ice sheet physical properties. IDDO plans to have one engineer onsite to operate the equipment, and the IDDO Intermediate Depth Logging Winch will also be onsite as a backup winch for the project.

(3) the Characterization of Upstream Ice and Firn Dynamics Affecting the South Pole Ice (SPICE) Core project (PI Koutnik; I-193-S) will use an IDDO hand auger and a 4-Inch Drill to drill several holes to depths ranging from 5 to 120 meters near South Pole Station. The holes will be utilized for the installation of strain meters as well as one 40-meter thermistor string. One 120-meter firn core will be collected and retrograded to the US. IDDO will deploy two drillers for the project.

(4) the Constraining Plio-Pleistocene West Antarctic Ice Sheet behavior from the Ohio Range and Scott Glacier project (PI Mukhopadhyay; G-438-M) will use IDDO's new Winkie Drill to core the ice-bed interface and subglacial bedrock at a site in the Ohio Range. Collected rock samples will be shipped to the PI's home institution for further analyses. IDDO will deploy one driller for the project.

(5) the Velvet Ice – Evolution of Fabric and Texture in Ice at WAIS Divide, West Antarctica project (PI Pettit; I-166-M) will use the Deep Logging Winch and the services of one IDDO winch operator to log the WAIS Divide Ice Core borehole with two different instruments to study the evolution of ice fabric and texture.

(7) the EXPROBE–WAIS: Exposed Rock Beneath the West Antarctic Ice Sheet, A Test for Interglacial Ice Sheet Collapse project (PI Stone; I-277-M) will use IDDO's new Agile Sub-Ice Geological (ASIG) Drill to core the ice-bed interface and subglacial bedrock at a site near Pirrit Hills in West Antarctica. Collected rock samples will be shipped to the PI's home institution for further analyses. IDDO will deploy three drillers for the project. 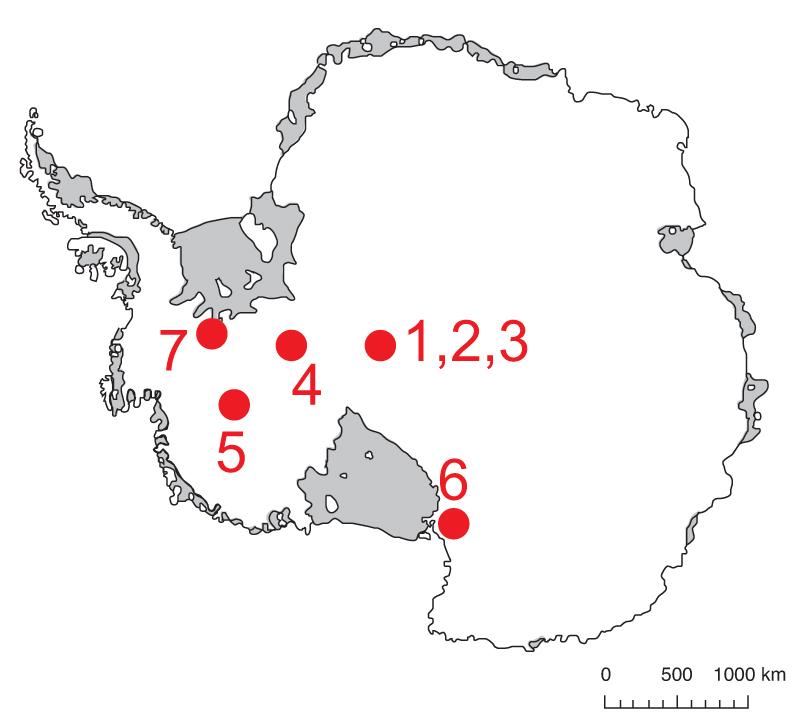 Map of Antarctica showing IDDO 2016-2017 field season locations. The numbers shown on the map correspond to the project numbers in the text above.

Agile Sub-Ice Geological Drill
During the fourth quarter, IDDO completed all of the system modifications, repairs and upgrades identified during testing performed in the second quarter. The system was shipped to Port Hueneme, CA, in mid-September for use this coming Antarctic field season on PI John Stone's project (see Field Support to Antarctic Projects above).

Winkie Drill
During the quarter, IDDO completed the fabrication, assembly, and modifications of the Winkie Drill. On 9/16/16, the Winkie Drill system was shipped to Port Hueneme, CA, for its first Antarctic deployment on PI Mukhopadhyay's project (see Field Support to Antarctic Projects above).

Rapid Air Movement (RAM) Drill
During the quarter, IDDO continued review of the existing sled design and its suitability for use with a reverse circulation dual walled pipe drill. With interest by both the seismic and physics communities on modification and use of the RAM Drill, IDDO plans to work with IDPO in PY 2017 (Nov 1, 2016 - October 31, 2017) to develop updated science requirements for the drill, upon which all subsequent modifications and upgrades will be based. During the quarter, IDDO also completed necessary paperwork for participation in a capstone project at the Colorado School of Mines (CSM). The project was accepted for the current school year where CSM students will study air flow and down hole tooling analysis for the RAM Drill.

MAgIC Drill/Intermediate Depth Drill-Light
Throughout PY 2016, IDDO worked with IDPO and community scientists to develop and refine science requirements for a drill similar to the 1500 m Intermediate Depth Drill, but with a depth target between 400-700 meters and with a much-reduced logistics burden to allow for coring on remote glaciers, for instance, in Alaska. IDDO is working with IDPO and interested community scientists to develop an approach to the desired equipment, and is in the process of compiling system options to present to the community. A decision on the naming of the new system, and whether or not it will be built, will be determined once the science requirements are finalized.

Foro Drill
IDDO continued to procure drill components for the Foro Drill during the quarter as planned, including a slip ring and a winch frame assembly. Design of the cable was finalized and the cable subsequently ordered in early August. The control box layout was reviewed, the mechanical design of the box was finalized, and custom aluminum cases and faceplates were procured.

Deep Ice Sheet Coring (DISC) Drill
Any further development work for the DISC Drill remains on hold, until the science community identifies if/when the system will next be deployed.

The U.S. Ice Drilling Program Office (IDPO) is once again organizing a Town Hall meeting at the Fall AGU Meeting entitled 'TH010: Scientific Drilling in the Polar Regions'. Ice sheets, glaciers, and the underlying bedrock, sediment and permafrost hold crucial evidence of past climate, ice sheet extent, and cratonic geology. National and international collaboration for drilling in the remote polar regions requires strategic coordination between science, technology, and logistics. This meeting will provide the research community with updates on IDPO-IDDO, IPICS, IPA, RAID, and WISSARD drilling initiatives. Opportunities for community involvement will be showcased, and input from the audience will be solicited.

Call for Nominations: Science Advisory Board to the U.S. Ice Drilling Program Office

The Science Advisory Board (SAB) to the U.S. Ice Drilling Program Office invites nominations and expressions of interest from the scientific community to fill two open positions on the SAB. The SAB invites nominations and expressions of interest from all specialties but is particularly interested in maintaining expertise in geophysics and sub glacial processes. The primary purpose of the SAB is to maintain a long range science plan for US ice drilling activities that that addresses multiple aspects of ice and related science and associated technology, and informs investments in drilling and related infrastructure. SAB members typically serve for three years, attend the annual SAB meeting, and collaborate remotely as needed. Three SAB working groups, which include some SAB members and other members of the scientific community, provide input to SAB activities. For more information about the SAB please contact the current chair, Ed Brook ( brooke at geo.oregonstate.edu ).

* Please send nominations and expressions of interest to Icedrill at Dartmouth.edu by November 15, 2016. *

IDDO held its annual Technical Advisory Board (TAB) Meeting in Madison, WI, on September 13-14, with drilling experts from all over the world and from a wide variety of fields. IDDO also welcomed the attendance of IDPO-IDDO's NSF Program Officer, Mike Jackson, at the meeting. IDDO presented on the current status of IDDO field projects, equipment development projects, and equipment maintenance and upgrade efforts. As with each TAB meeting, IDDO gained very valuable feedback from board members on equipment development projects, ideas regarding new technologies in ice drilling and other fields, as well as input on field project logistics. Notes from the meeting are available at http://icedrill.org/about/tab.shtml .

Work has begun planning the next 'School of Ice' to be held late spring 2017. School of Ice is designed for faculty at MSIs (Minority Serving Institutions) to learn about ice core science from IDPO researchers and lab activities to use in transferring ice science to their students. Applications to faculty from MSIs will be sent out before the end of the year. Any questions, please contact Louise Huffman at louise.t.huffman at dartmouth.edu .

The SCAR (Scientific Committee on Antarctic Research) Conference was held in Kuala Lumpur Malaysia this year and IDPO education and outreach (EO) was well represented. Huffman (IDPO Director of EO) chaired a double EO session that had abstracts submitted from 14 different countries. Her oral presentation was about bridging the gap between researchers and non-technical audiences through various EO programs and projects.

Attendance at the SCAR conference led to many collaborative meetings including projects like PEI (Polar Educators International), APECS (Association of Polar Early Career Scientists), ICECUBE, SCAR and Polar18. Working with APECS, Huffman served on a mentor panel and also facilitated a communication workshop for APECS members the weekend prior to the start of the SCAR Conference. She met with leaders of PEI and APECS to collaborate on ways to work together in the future. 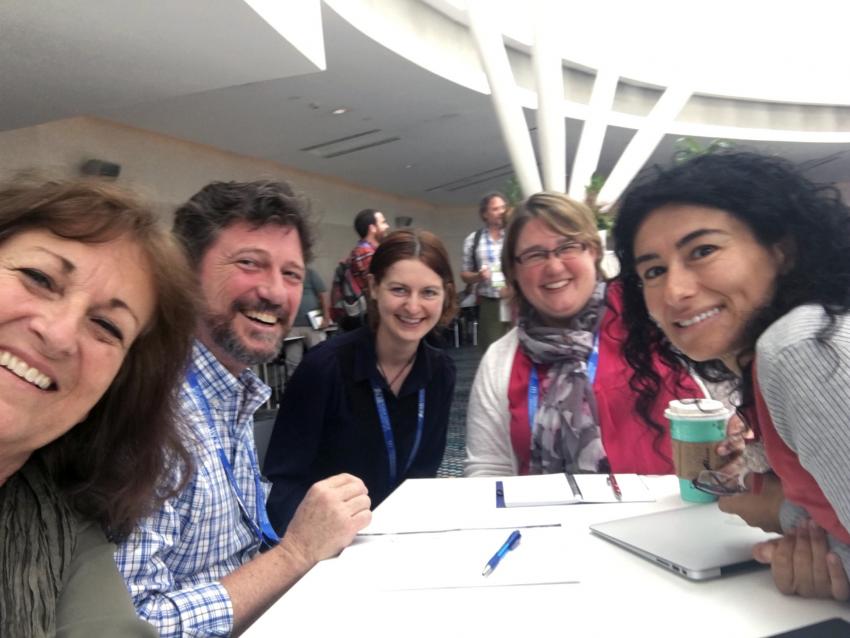 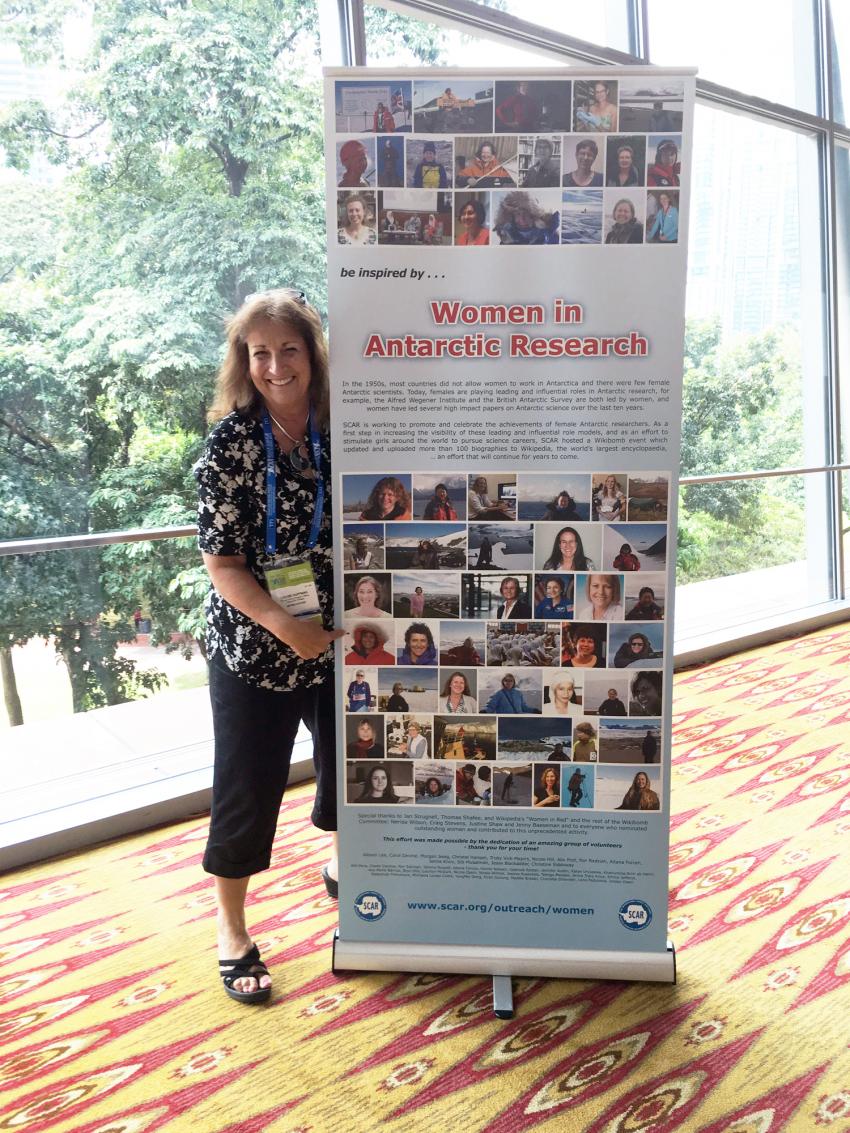 SCAR sponsored a Wikibomb event, Women in Antarctic Research, recognizing the contributions women have made in Antarctica. Several of our IDPO women were nominated including Executive Director, Mary Albert, and EO Director, Louise Huffman. 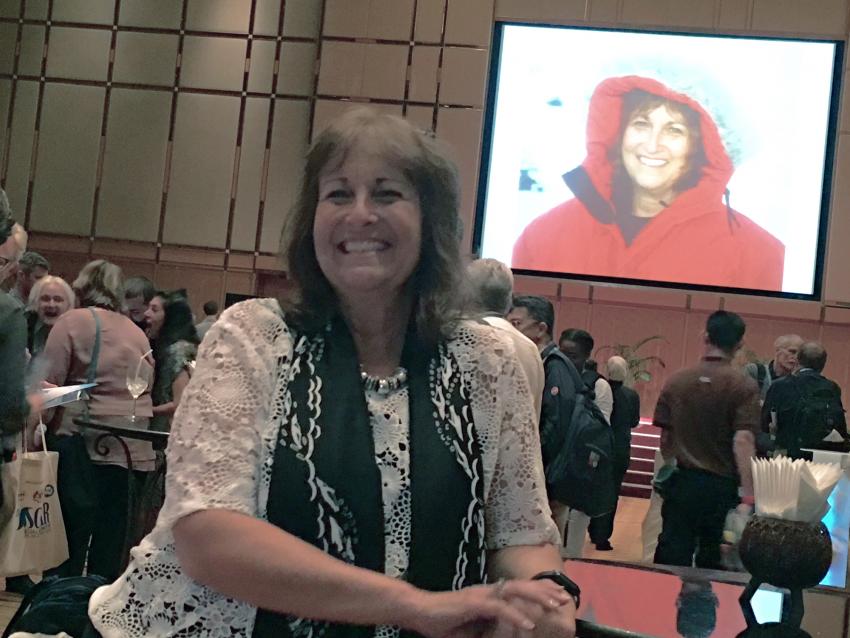 SCAR sponsored a Wikibomb event, Women in Antarctic Research, recognizing the contributions women have made in Antarctica. Several of our IDPO women were nominated including Executive Director, Mary Albert, and EO Director, Louise Huffman.

If you are preparing a proposal that includes any kind of support from IDPO-IDDO, you must include a Letter of Support/Scope of Work (LOS/SOW) document from IDPO-IDDO in the proposal. Researchers are asked to provide IDPO-IDDO with a detailed support request six weeks prior to the date the support document is required. Early submissions are strongly encouraged.

For the latest information on our current and upcoming field projects, visit:
http://icedrill.org/fieldwork 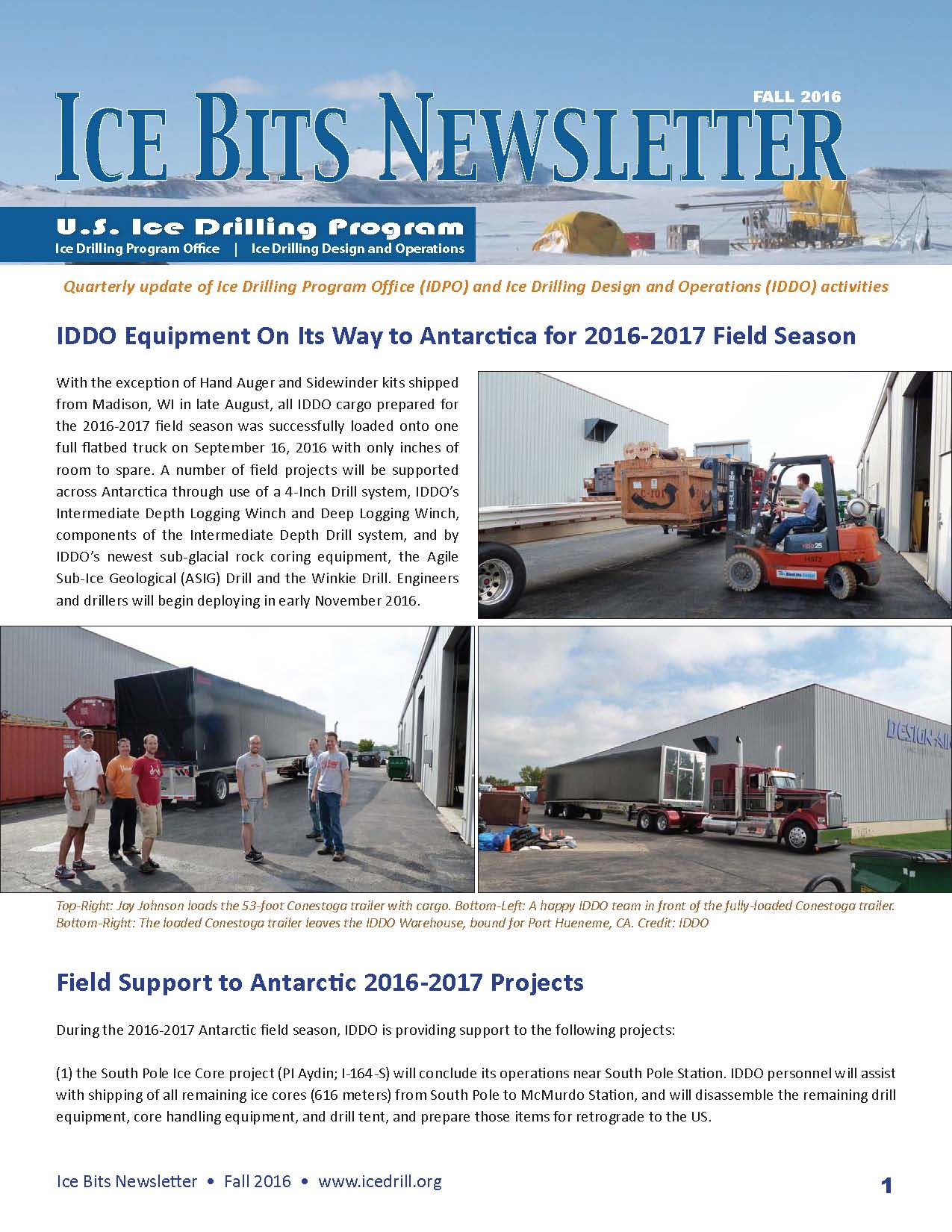