During the Second Quarter, IDDO Project Manager and Lead Mechanical Engineer, Chris Gibson, brought the concept of a temporary ice well testing facility to life. Using a cased hole in the ground on the University of Wisconsin Physical Sciences Lab (PSL) property just a 20-minute drive outside of Madison, Gibson designed a way to insert a smaller casing within the larger hole, run a chilled glycol loop between the two and fill the center casing with a column of ice, concrete, granite and mixed media, all to allow for a thorough test of the new Agile Sub-Ice Geological (ASIG) Drill, which is planned for Antarctic deployment in 2016-2017. The test setup provided IDDO engineers with an invaluable opportunity to test the drill rig, make quick modifications with new parts through local and trusted vendors, and allowed for engineer and driller familiarization with the unit. IDDO welcomed several visitors to the test site, including personnel from IDPO, ASC, IDDO and the PI of the first funded project making use of the drill. While the well setup was only temporary for this test, its success serves as an excellent proof of concept for the installation of a more permanent ice well and testing/training facility, should funds allow in the future. Testing in Madison is far less expensive than test seasons in either Greenland or Antarctica, so IDDO will continue to explore this prospect in the future. 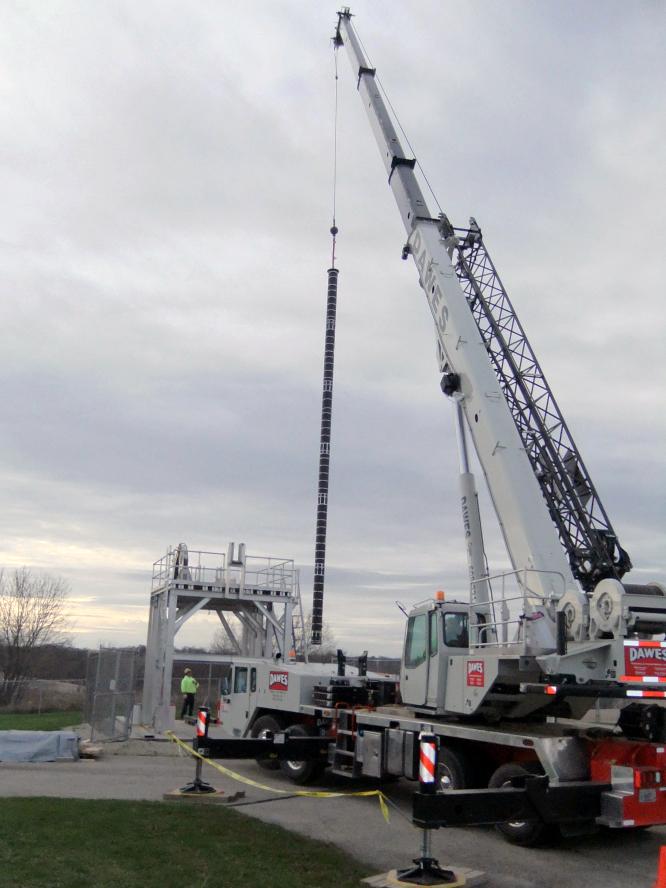 Preparing the temporary ice well at PSL for the North American Test of the ASIG Drill. Credit: Chris Gibson 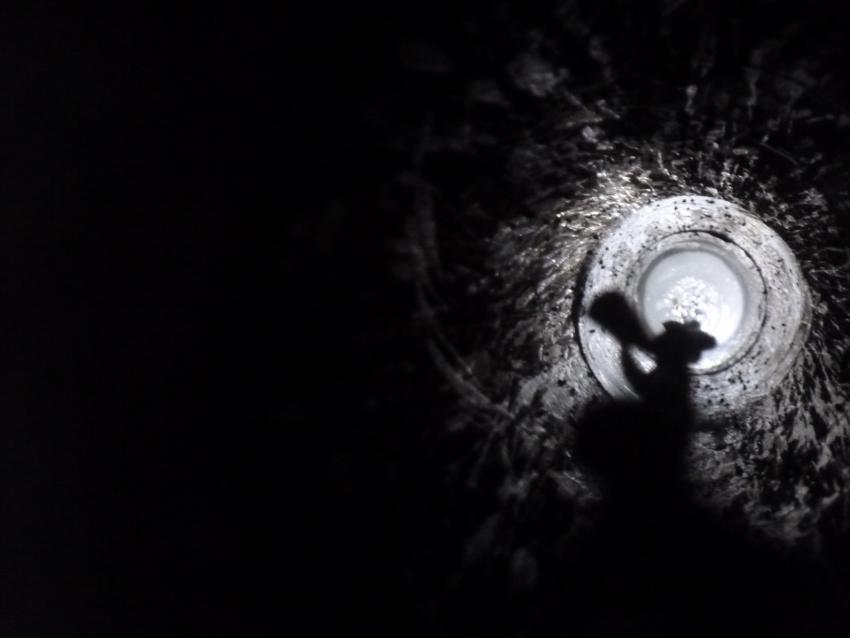 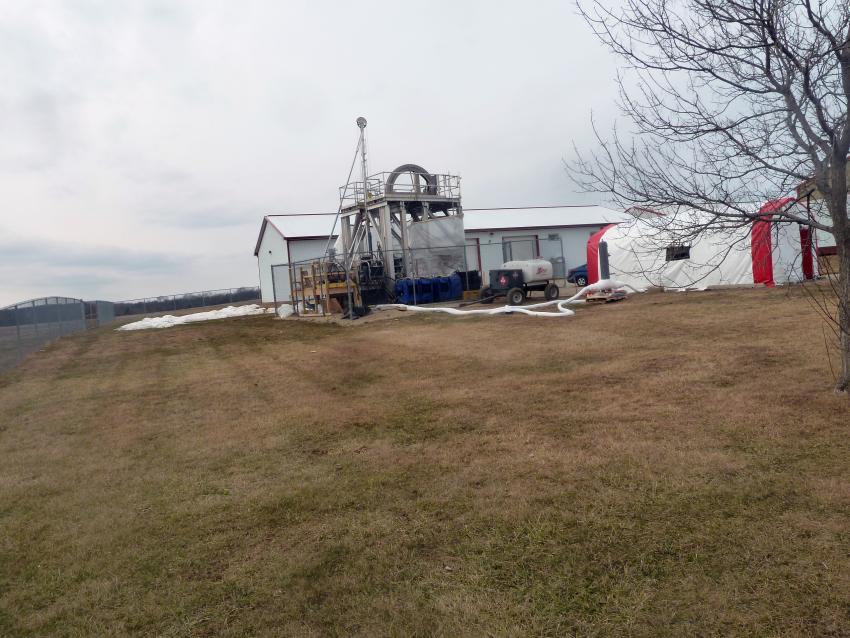 IDDO ramped up its work on the Winkie Drill system during the quarter. Several IDDO engineers were able to test the system's ability to auger through ice outside of McMurdo Station in early February. IDDO also researched and performed additional testing with regard to ice chips transport using a small air compressor. IDDO engineers are working to prepare the system for upcoming Antarctic work in 2016-2017, where a series of holes will be drilled in ice 10-50 meters deep, below which 50 cm bedrock cores will be collected. Utilizing proven rock coring technology in the off-the-shelf rig, along with proven ice coring and ice chips transport technologies, IDDO looks forward to bringing shallow, agile sub-glacial bedrock coring to life. 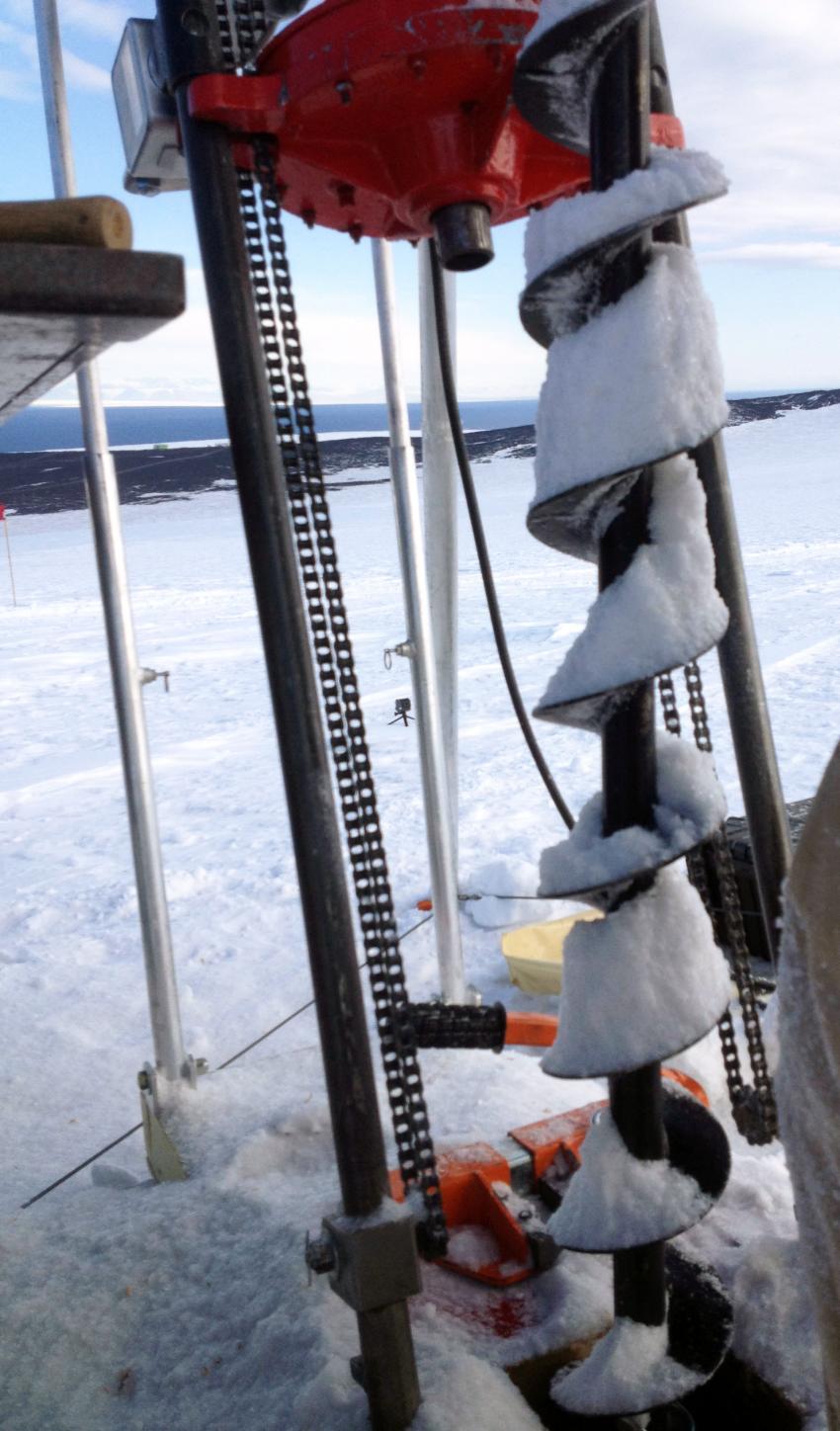 Teachers from across the nation were engaged in multiple IDPO educational outreach events at the National Science Teachers Association (NSTA) Conference in Nashville, TN. Approximately 88 educators participated in several hands-on activities about ice science and climate that they can use in their classrooms. 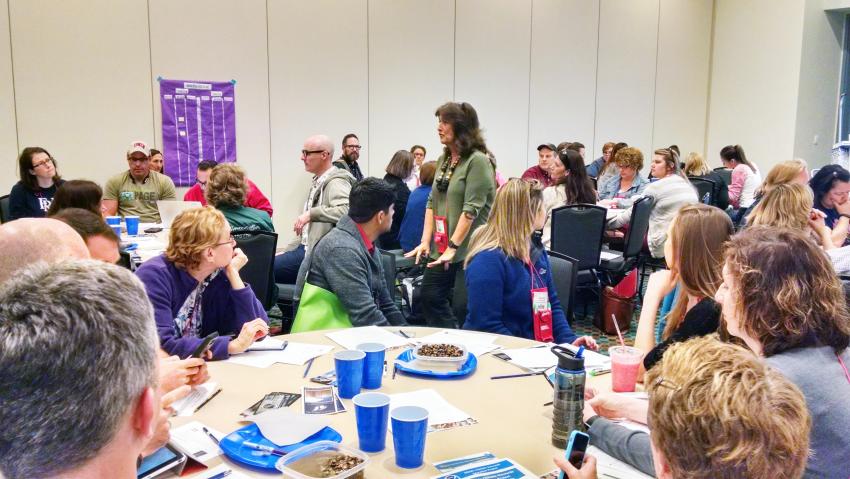 Agile Sub-Ice Geological Drill
During the Second Quarter, IDDO initiated full-scale system testing of the Agile Sub-Ice Geological (ASIG) Drill outside of Madison, Wisconsin on the UW Physical Sciences Lab (PSL) campus. IDDO engineers, a contract driller and a trainer from the rig vendor, Multi-Power Products, LLC, were able to test a variety of operations, per the Test Plan drafted by IDDO Project Manager Chris Gibson, including the coring of ice, concrete, solid granite and mixed media. The team was also able to tune the rig, refine fuel and drilling fluid consumption rates, determine the expected operational parameters of the system, such as penetration rates, and identify and refine the spare parts list. The rig performed reliably and is expected to meet or surpass all related science requirements. IDDO hosted several visitors to the test site on February 26, 2016, including Bill Eustes, Blaise Stephanus and Mark Twickler from IDPO, as well as PI John Stone, as the drill system will be used first for his upcoming project in 2016-2017 near Pirrit Hills in Antarctica. Leah Street from ASC, in Madison on other business, was also able to visit the site, as well as several other IDDO personnel. Late in the quarter, IDDO engineers quickly transitioned to system modifications, repairs and upgrades, in anticipation of shipping the system to Antarctica in September.

Winkie Drill
During the Second Quarter, IDDO continued its modifications and upgrades to the off-the-shelf Winkie Drill purchased from Minex. Early in the quarter, IDDO was able to test its adaptations of auger flights during the Rapid Access Ice Drill (RAID) Auger and Packer Test near McMurdo Station. Important information was gained regarding penetration rates, expected fuel consumption, and the augers' ability to transport ice chips to the surface. Taking advantage of the ASIG Drill test set up, the transportation of ice chips by air was tested as a proof of concept for drilling options in the deep field. Later in the quarter, IDDO identified two types of mixed media coring bits, completed fabrication of a rig base for the system to support the drill and evenly distribute loads across the snow surface during core breaks, completed installation and testing of a variable frequency motor drive for the mud pump, and completed modifications of a drill fluid filtration drum. IDDO will continue its work into the Third Quarter, and also plans to complete additional testing and training in Madison in July 2016, prior to shipping the system to Antarctica in September.

MAgIC Drill/Intermediate Depth Drill-Light
During the quarter, IDDO worked with IDPO and community scientists to develop and refine science requirements for a drill similar to the 1,500 meter Intermediate Depth Drill (IDD), but with a depth target between 500-900 meters and with a much-reduced logistics burden to allow for coring on remote glaciers, for instance, in Alaska. A decision on the naming of the new system, and whether or not it will be built, should be resolved in the Third or Fourth Quarters.

Foro Drill
IDDO ramped up its design of the Foro Drill during the quarter, corresponding with winch drum and other winch component manufacturers. IDDO initiated procurement of components for prototyping the winch control system and building the new Foro control box.

Deep Ice Sheet Coring Drill
IDDO has temporarily put any further development work for the Deep Ice Sheet Coring (DISC) Drill on hold, until the science community identifies if/when the system will next be deployed. Some minor maintenance and cleaning up of the LabVIEW software was completed during the quarter. A good portion of the DISC Drill cargo also returned from Antarctica in April, and is being unpacked and dried.

The IDPO Science Advisory Board (SAB) meeting was held on April 11-12, 2016 at the Hilton Arlington in Arlington, VA. Planning for the meeting was a joint effort by Mary Albert and SAB Chair Ed Brook. With participation of the entire SAB membership and attendance by several program officers and section heads at NSF Polar Programs, as well as IDPO and IDDO management, the meeting was very productive in identifying the future direction of the science for the IDPO Long Range Science Plan and associated ice-drilling endeavors. Discussions also involved scenarios of possibilities for future hot water ice access drilling.

Acknowledgement of IDPO-IDDO in Publications (2016 Spring)

If you receive any support from IDPO-IDDO, we kindly request that you acknowledge IDPO-IDDO in any resultant publications or articles with the following statement: "We thank the Ice Drilling Program Office and Ice Drilling Design and Operations group for coring activities (NSF-1327315)." If you have any questions, please contact us at icedrill@dartmouth.edu.

The Division of Polar Programs (PLR) at the National Science Foundation updated its data management and data reporting policy, effective January 21, 2016. In particular, there are special data archiving requirements for projects supported by Arctic Sciences, as well as separate data archiving requirements specifically for projects supported by Antarctic Sciences. If you have not reviewed the PLR data policy recently, you are strongly encouraged to do so. The updated data policy is available online at: http://www.nsf.gov/geo/geo-data-policies/plr/plr-data-mgt-policy-jan16.pdf

For the latest information on our current and upcoming field projects, visit:
https://icedrill.org/fieldwork 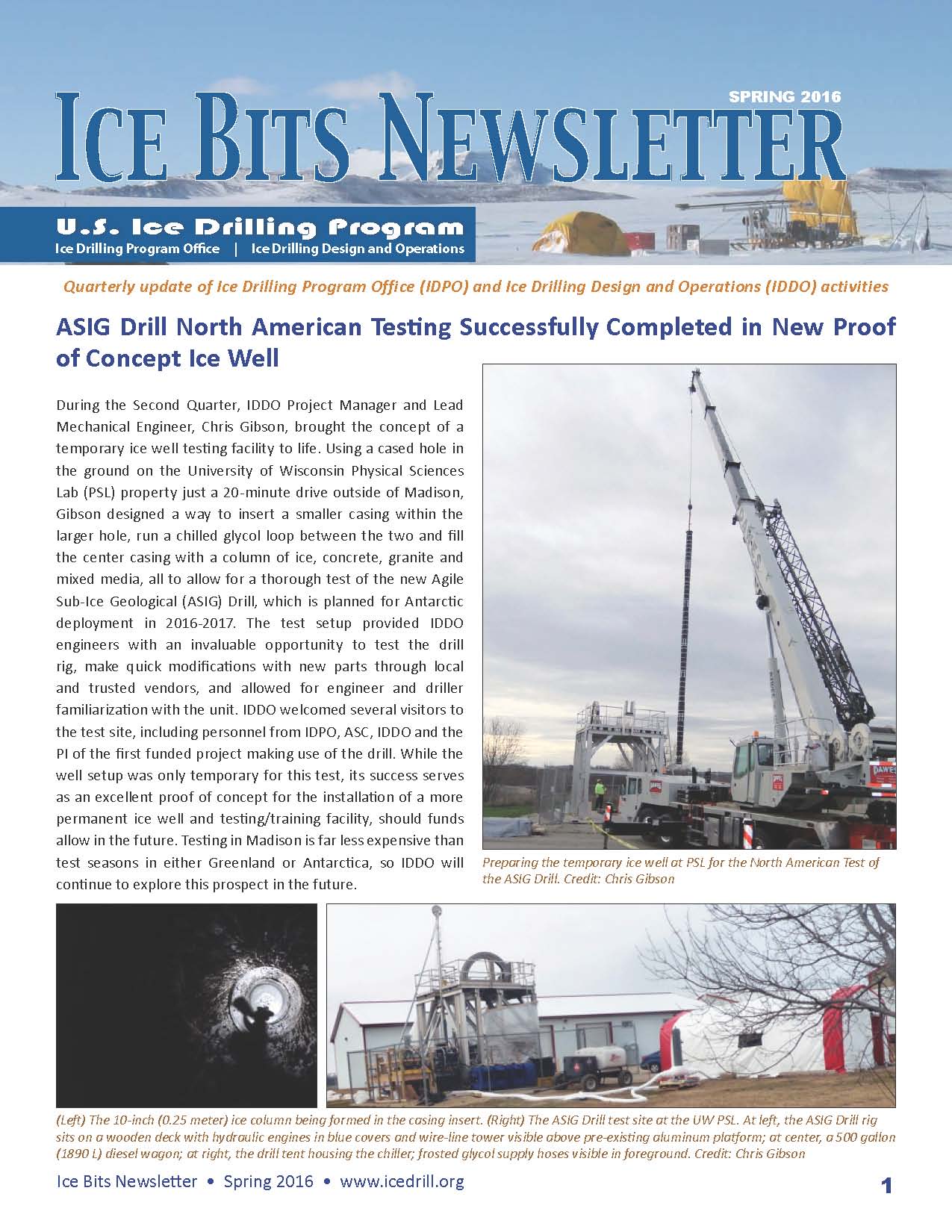