IDDO kicked off the second quarter by welcoming new Field Support Manager, Anna Claussen, to the IDDO team. With an educational background in construction engineering, and professional experience in technical support and customer service, Anna has already become a tremendous asset to IDDO operations. During her first three months, Anna has quickly come up to speed on everything from cargo preparation and shipping, to management of field projects in both the Arctic and Antarctic, and has been instrumental in drafting a record number of Letter of Support/Scope of Work documents for PIs for the 2017 Antarctic proposal solicitation deadline (17-543). 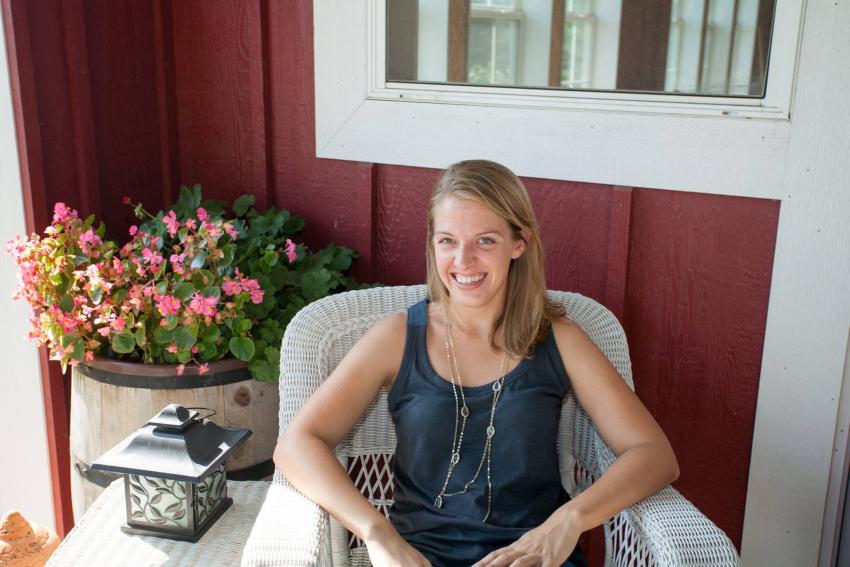 In early April, IDDO received five flatbed trucks full of returning drilling and logging equipment from Port Hueneme, California. The cargo included equipment operated in support of 2016-2017 Antarctic field projects, as well as a large amount of DISC Drill equipment from the WAIS Divide project. IDDO staff unloaded the cargo and unpacked and dried the equipment, readying it for either maintenance/upgrade or storage in the IDDO warehouse for use on future projects. 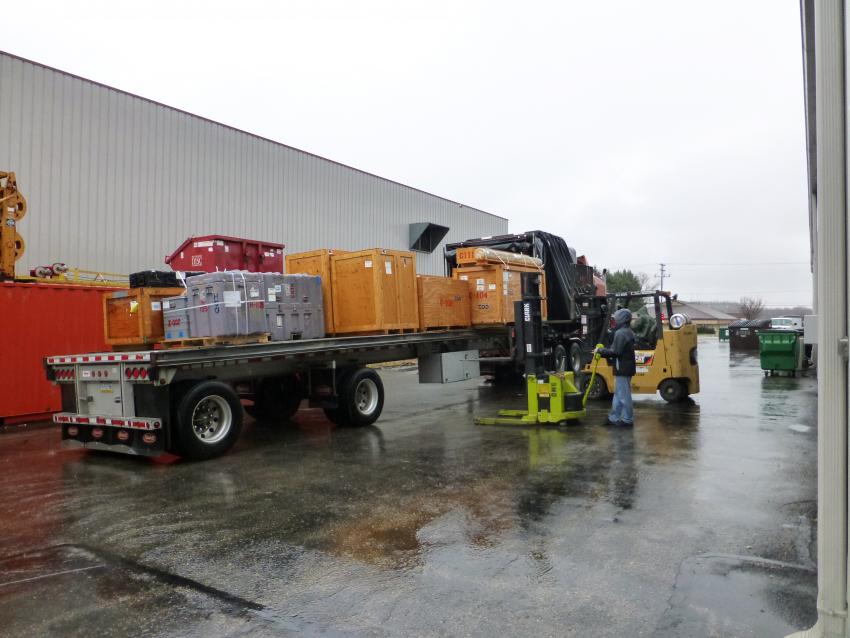 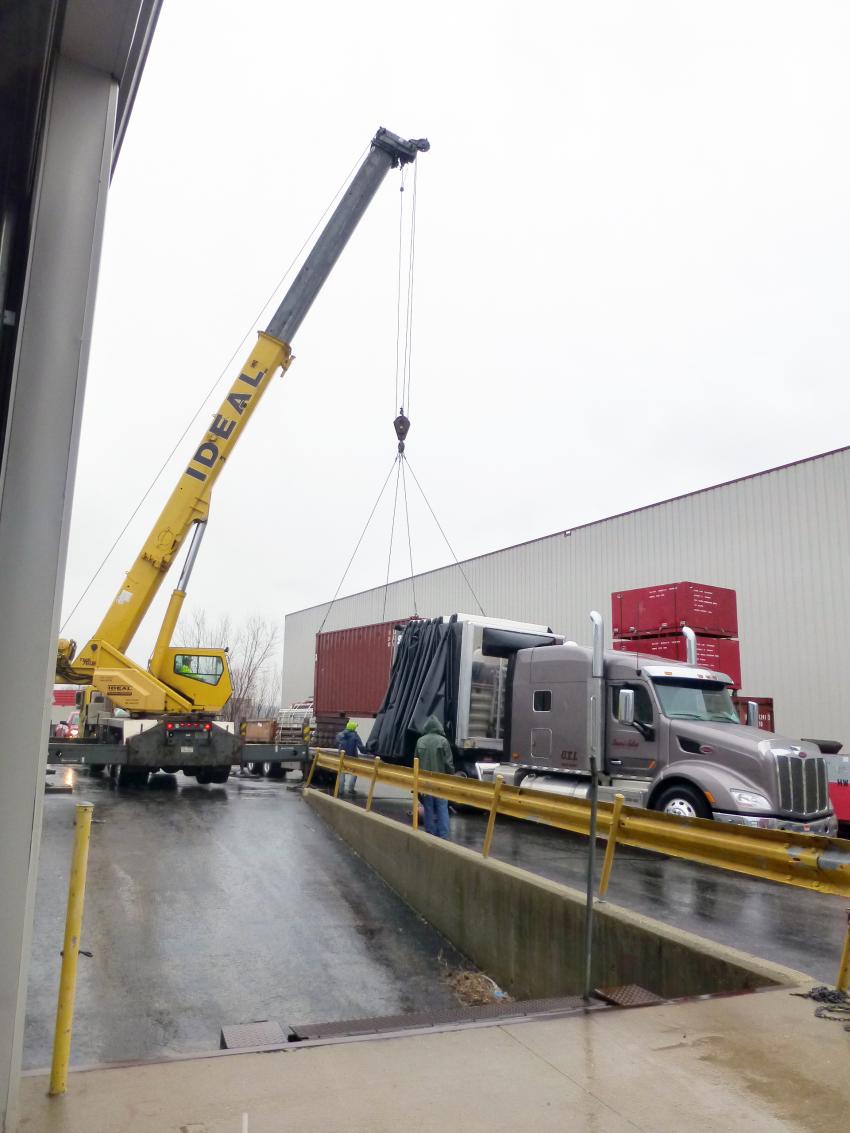 The second quarter saw the start of the 2017 Arctic field season. IDDO is providing support to the following projects:

(1) the Dynamic Observations of the Microstructural Evolution of Firn Under Load project (PI Baker; NSF award #1603239) will use an Eclipse Drill to extract an 80-meter core from Summit Station, Greenland. A suite of spectroscopy techniques will be used to monitor the 3-dimensional real-time densification of the core and the evolution of crystal orientation to determine the mechanisms of ice core densification and microstructure evolution as a function of depth. During the quarter, IDDO drillers Mike Jayred and Elizabeth Morton were in Madison to pack and prepare the Eclipse Drill equipment for the upcoming season, and the equipment shipped in early May for the June fieldwork.

(2) the Influence of Natural Ice Microstructure on Rheology in General Shear project (PI Gerbi; NSF award #1503924) used an Eclipse Drill to collect a series of surface-to-bed ice cores along the shear margin of Jarvis Glacier, in the eastern Alaska Range. The investigators will use the ice cores to study how the internal strength and microstructure of the ice affects the glacier's ice flow. During the quarter, IDDO driller Mike Waszkiewicz deployed to Alaska along with an Eclipse Drill. IDDO also shipped a hand auger and Sidewinder to help with prospecting for drill sites in the shear margin. The project was largely complete by the end of the quarter.

(3) the Refreezing in the Firn of the Greenland Ice Sheet project (PI Rennermalm; NSF award #1604058) will use a hand auger and Sidewinder to collect several shallow firn cores from the southwestern sector of the Greenland Ice Sheet. The firn cores will be used to investigate the stratigraphy, density, temperature and liquid water content of the firn cover and its spatial and temporal variations. The goal of the project is to better understand how the surface meltwater generated in the summer makes its way from its location on the ice sheet to the ocean. During the quarter, PI Rennermalm's student completed pre-season hand auger training in Madison, WI, at the IDDO warehouse. IDDO also shipped the hand auger equipment to Scotia, NY, and it was received by the PI in Greenland for the start of the field season in April.

(4) the Greenland Traverse for Accumulation and Climate Studies (GreenTrACS) project (PI Osterberg; NSF award #1417678) will use a hand auger and Sidewinder to drill several shallow ice cores along a traverse in the Western Greenland percolation zone. Continuous ground penetrating radar data will also be collected during the traverse. The research objectives include: (1) determining the patterns, in time and space, of snow accumulation in Western Greenland over the past 20-40 years; and (2) evaluating surface melt refreeze and englacial meltwater storage in the Western Greenland percolation zone over the past 20-40 years. During the quarter, IDDO shipped the hand auger equipment to Scotia, NY, and it was received by the PI in Greenland for the start of the field season in April.

Stampfli 2-Inch Drill
Late in PY 2016, and in response to the U.S. Ice Drilling Program Office Long Range Science Plan, IDDO ordered an off-the-shelf 2-Inch Drill system from Icedrill.ch. IDDO received the Stampfli 2-Inch Drill in April 2017 and completed an initial assembly of the equipment. IDDO is planning to send the very lightweight, agile system to Greenland for field testing in June in conjunction with PI Baker's project (see Field Support to 2017 Arctic Projects above).

Rapid Air Movement (RAM) Drill
The science requirements were finalized for the modification and upgrade to the current Rapid Air Movement (RAM) Drill, which is used to create ~100-meter deep shot holes for seismic exploration. The science requirements target a system capable of drilling as fast as the existing RAM Drill, but at a small fraction of the current system weight. Numerical modeling and testing was initiated during the quarter to identify both the hose and drill head configurations required to achieve the desired results. The science requirements are available on the IDPO-IDDO website at https://icedrill.org/equipment/rapid-air-movement-drill.

Sediment Laden Lake Ice Drill
The Sediment Laden Lake Ice Drill is a lightweight, field portable hot water drill for drilling through several meters of sediment-laden lake ice. During the quarter, the detailed Conceptual Design for the drill was completed, and the Design Review was held on 4/5/17. The Design Review was a virtual meeting where IDDO presented the Conceptual Design for the drill, and community scientists Peter Doran and Andrew Thurbur provided feedback from the scientist/user perspective, and Dennis Duling provided feedback and recommendations on the technical aspects. Major drill components were purchased in April with consideration of feedback from the review.

IDPO conducted the annual Science Advisory Board (SAB) meeting in Madison, WI, on March 6-7. And IDDO conducted its annual Technical Advisory Board (TAB) meeting in Madison, WI, on March 7-8 to allow the two boards to overlap and talk with one another on March 7. The presentations and minutes from the meetings are available on the IDPO-IDDO website at http://icedrill.org/about/sab.shtml and http://icedrill.org/about/tab.shtml.

On May 22-23, 2016, IDPO held the Subglacial Access Science Community Planning Workshop in Herndon, Virginia, which was a science-planning meeting organized by IDPO Director Mary Albert and was open to the community and to NSF. The goal of the meeting was to identify community consensus on the major community science projects in the coming decade that would need subglacial access drilling. Attendees at the workshop included 30 scientists, four NSF program managers, and one representative of Antarctic Support Contract. IDPO Subglacial Access Working Group (IDPO-SAWG) members Jill Mikucki, Ross Powell, and John Goodge led the discussions at the meeting, facilitated by Mary Albert of IDPO. The workshop produced the following four white papers, which are available on the IDPO-IDDO website at http://icedrill.org/about/sab-working-groups.shtml#sawg:

School of Ice
From June 25-28, IDPO will host twelve faculty members from eleven different minority-serving institutions for the School of Ice workshop at Dartmouth. All travel plans for participants have been made, speakers were invited and confirmed, and materials are being prepared for the workshop. 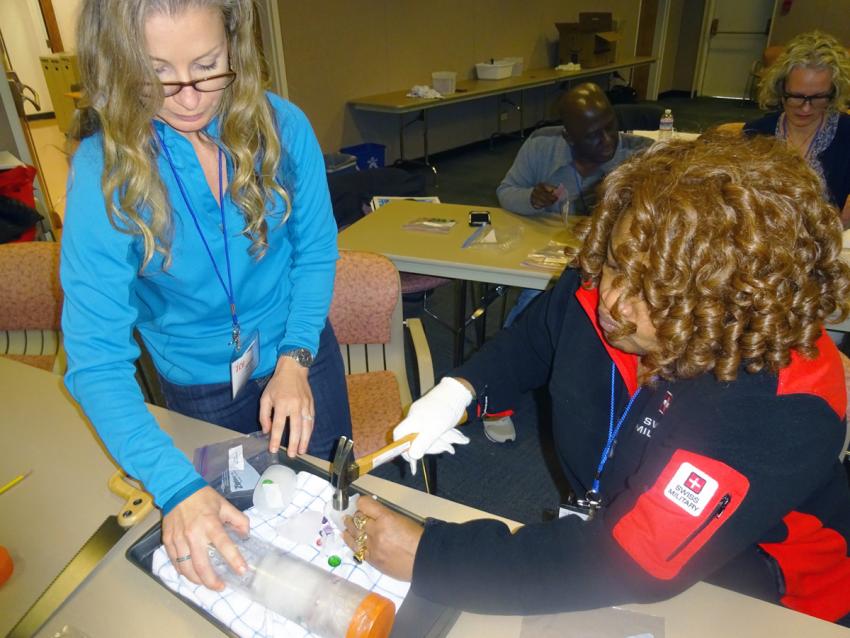 Participants in the 2017 School of Ice worshop will participate in similar activities to this lab from last year's workshop. Credit: Louise Huffman. 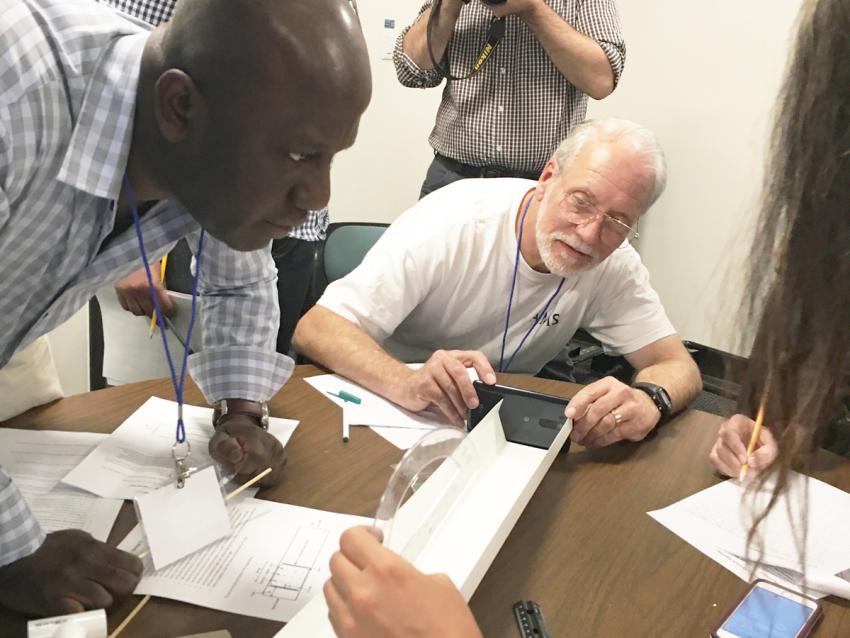 Participants in the 2017 School of Ice worshop will participate in similar activities to this lab from last year's workshop. Credit: Louise Huffman.

Checking Out Your Team
Educators are invited through IDPO's www.climate-expeditions.org to take part in an activity entitled "Checking Out Your Team" which brings IDPO scientists to classrooms through an IDPO webinar. On March 16, Mindy Nicewonger from the South Pole Ice Core drilling project presented ice core research information to 115 North Carolina eighth grade students and four teachers. Louise Huffman, IDPO Director of Education & Public Outreach, led the webinar and worked with the teacher, Beverly Owens, and Mindy to directly align the presentation with eighth grade science standards. 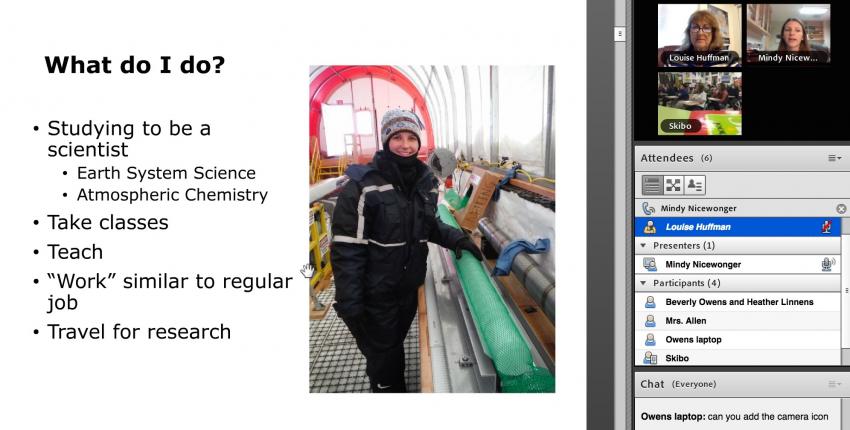 The IDPO "Checking Out Your Team" webinar included participation by a community scientist, 115 junior high students and four teachers.

IDDO Outreach Event
On April 1, 2017, approximately 200 visitors over a four-hour period visited IDDO in Madison, Wisconsin, and through demonstrations and hands-on activities learned about drilling and ice core science. Louise Huffman worked with Jay Johnson at IDDO, to suggest interactive activities that work with large multi-aged groups of visitors and sent IDPO pencils to give to visitors along with colorful informative bookmarks created by Anna Claussen, IDDO Field Support Manager. Several IDDO engineers participated in the well-attended event. 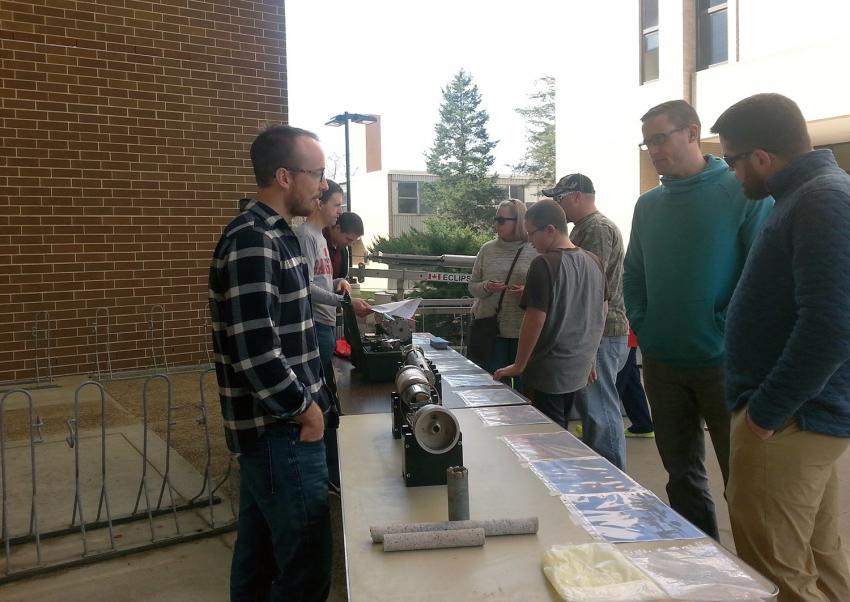 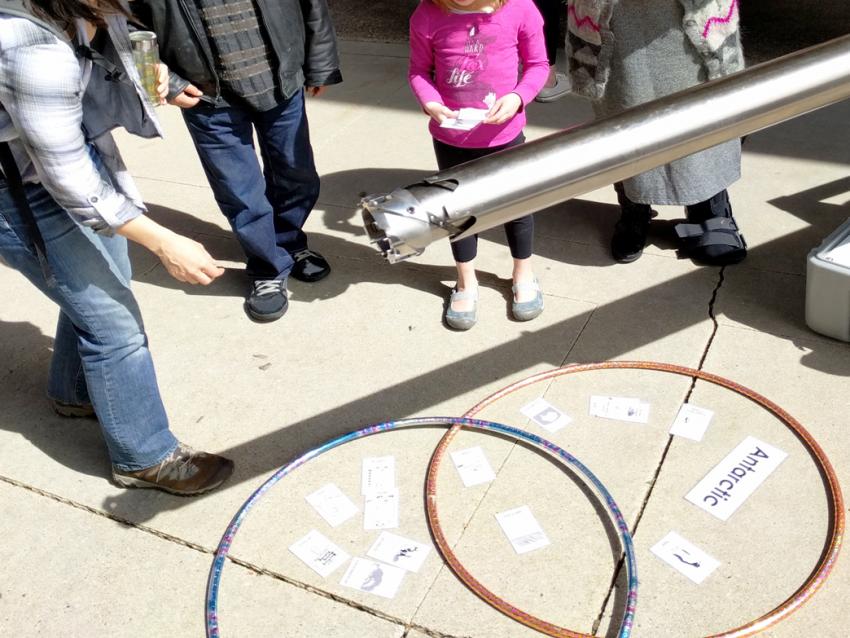 Visitors in Madison, WI play "Polar Opposites" where they learn about the extremes of working in Greenland and Antarctica. Credit: Chris Gibson 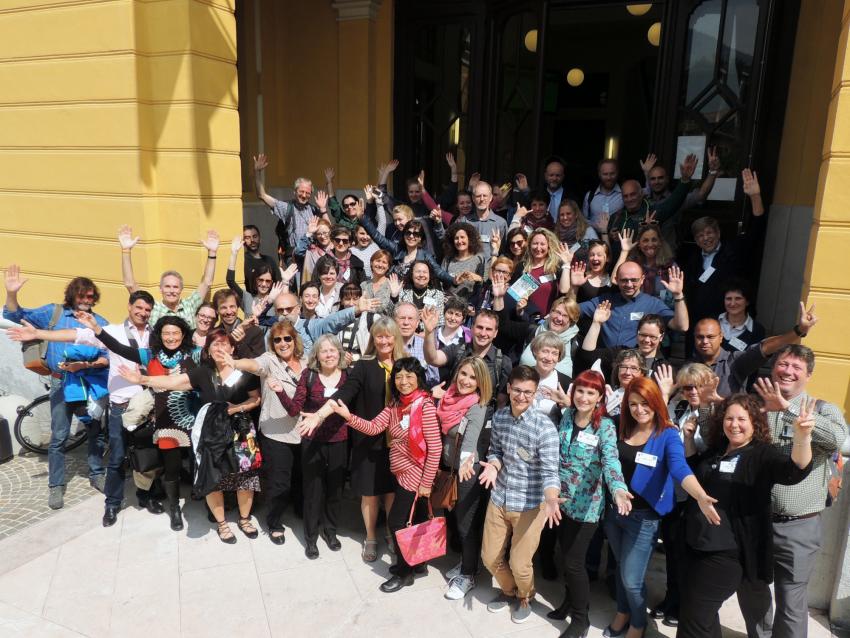 Robb Kulin, a former IDDO contract driller, will join NASA's 2017 class of astronaut candidates. Robb and eleven other astronaut candidates were selected from more than 18,300 applications - a record number, according to NASA. The candidates will train for two years before being considered for space missions.

As an IDDO driller, Robb spent the 2009-10 summer season at WAIS Divide, Antarctica, assisting with the DISC Drill deep drilling operation, and the 2010-11 summer season at Taylor Glacier, Antarctica, operating the Blue Ice Drill. Since 2011, Robb has worked at SpaceX, where he is currently the senior manager for flight reliability, leading the Launch Chief Engineering group in Hawthorne, California.

We wish Robb, and all the astronaut candidates, our very best wishes as they embark on this exciting journey! 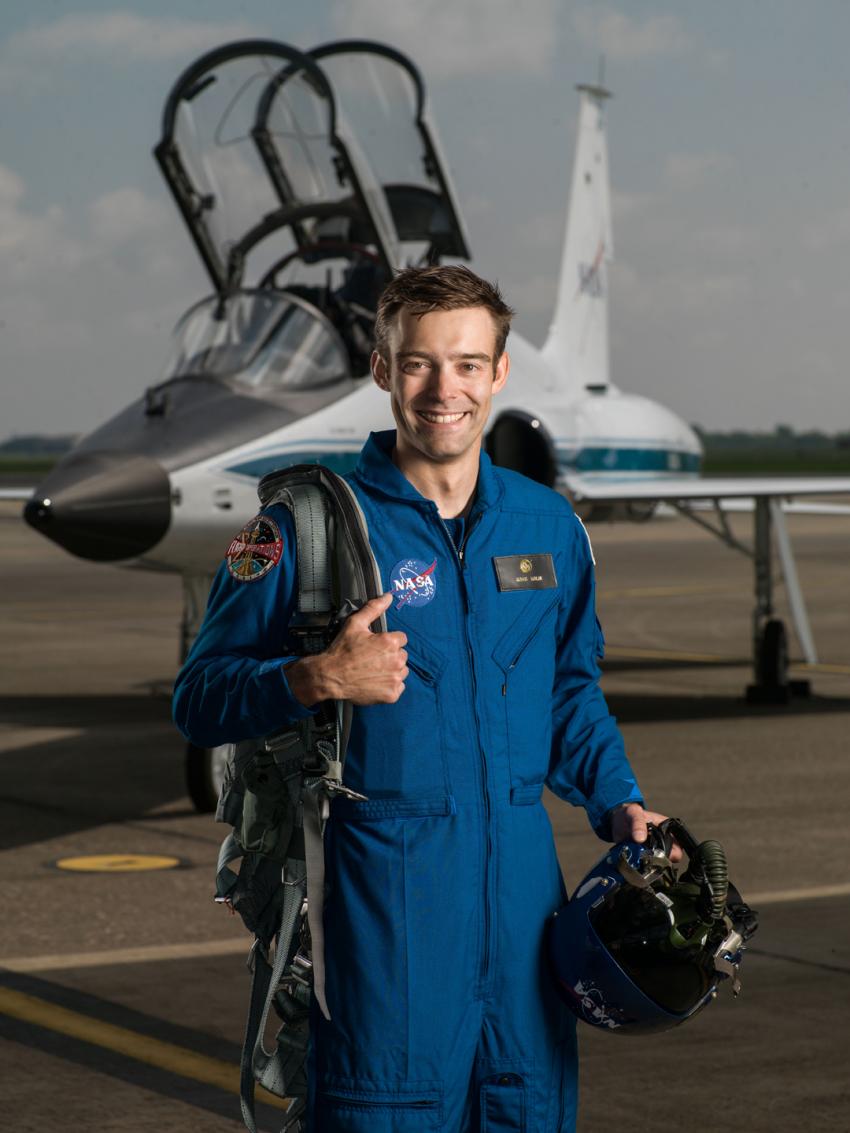 Robb Kulin has been selected by NASA to join the 2017 Astronaut Candidate Class. He will report for duty in August 2017. Credit: NASA (https://www.nasa.gov/astronauts/biographies/robb-kulin)

If you are preparing a proposal that includes any kind of support from IDPO-IDDO, you must include a Letter of Support/Scope of Work (LoS/SoW) document from IDPO-IDDO in the proposal. Researchers are asked to provide IDPO-IDDO with a detailed support request six weeks prior to the date the LoS/SoW document is required. Early submissions are strongly encouraged. 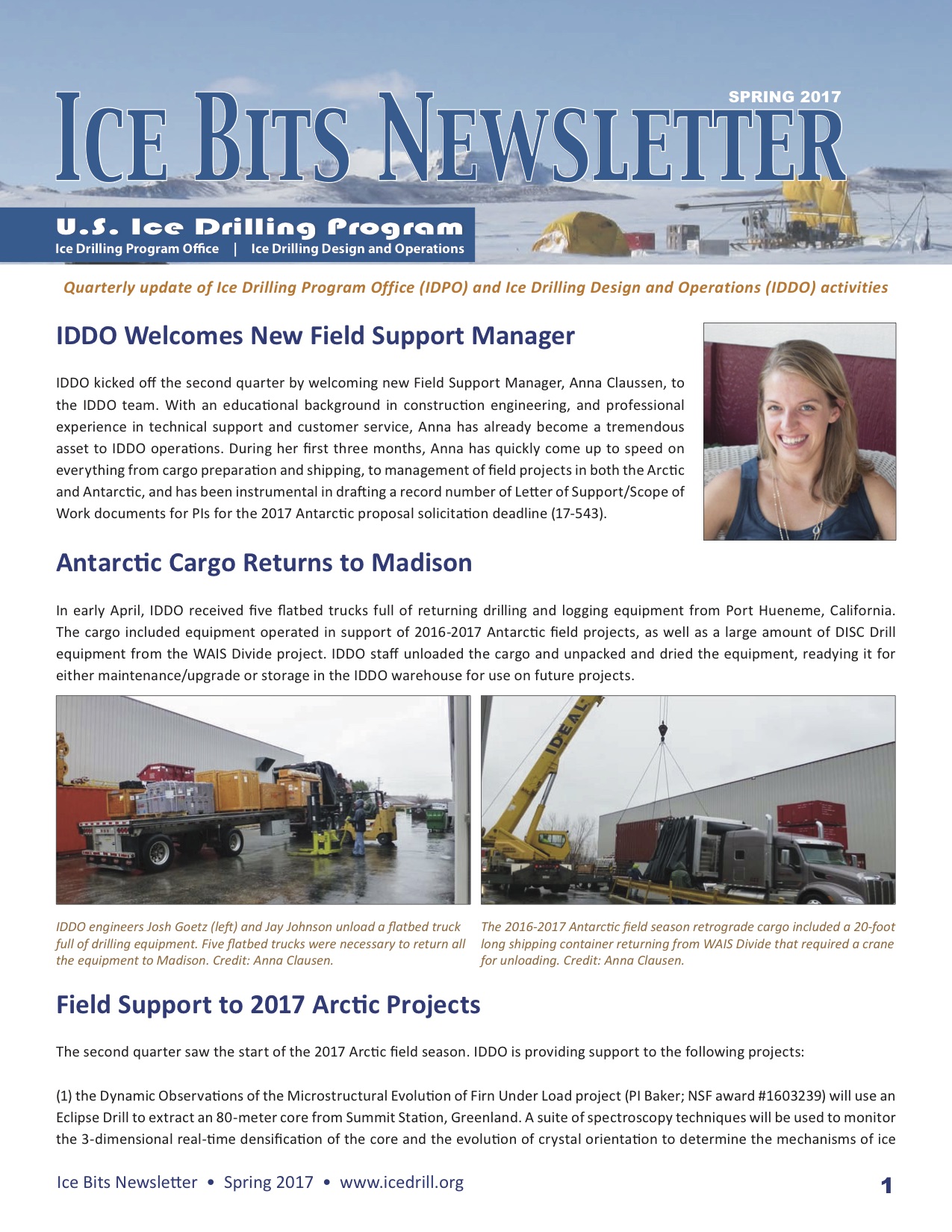