IDDO deployed four separate drilling/logging systems for use during the 2017-2018 season, along with three IDDO equipment operators.

IDDO engineer Tanner Kuhl accompanied the 4-Inch Drill and Deep Logging Winch to Minna Bluff for the Rapid Access Ice Drill (RAID) second Antarctic field trial (AFT2; PIs Goodge and Severinghaus; D-551-M) project. The 4-Inch Drill was used successfully to drill one hole to 131 meters, with firn air samples collected by the science team (PI Severinghaus; D-551-M) from nine separate depths. The 4-Inch Drill coring activities found the firn-ice transition at Minna Bluff to be at approximately 82 meters depth, providing valuable firn-ice transition data for the nearby RAID AFT2 operations. IDDO's Deep Logging Winch was deployed to allow for logging of the RAID AFT2 boreholes using Ryan Bay's optical logging tool. The Deep Logging Winch was ultimately not used during the RAID AFT2, however, as the RAID system was unable to complete a hole to depth. While development, fabrication and testing of the RAID system is being conducted by DOSECC Exploration Services LLC and is not an IDPO-IDDO activity, Kuhl's deployment to Minna Bluff also gave him the opportunity to drill with the RAID field team, learn about the RAID system operation, and provide trouble-shooting support to the RAID team. 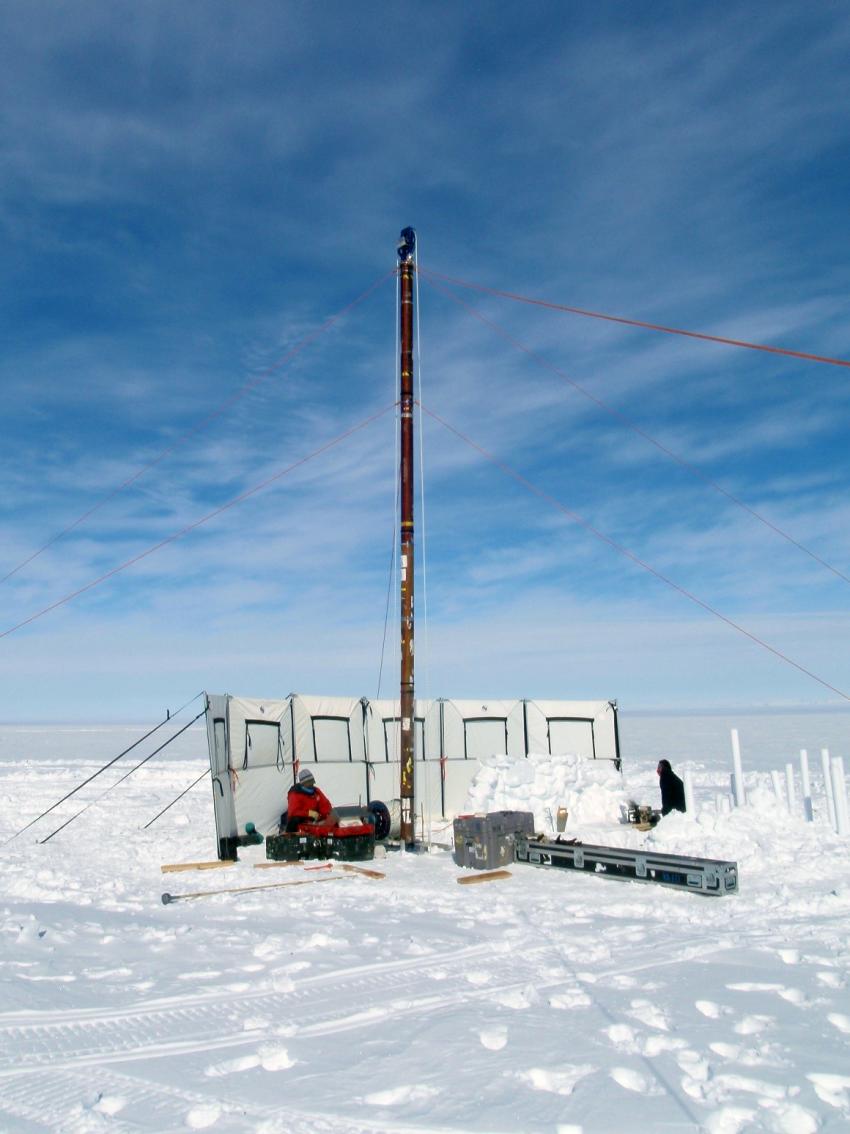 The 4-Inch Drill in use at Minna Bluff, Antarctica, during the 2017-2018 Antarctic field season. Credit: Tanner Kuhl 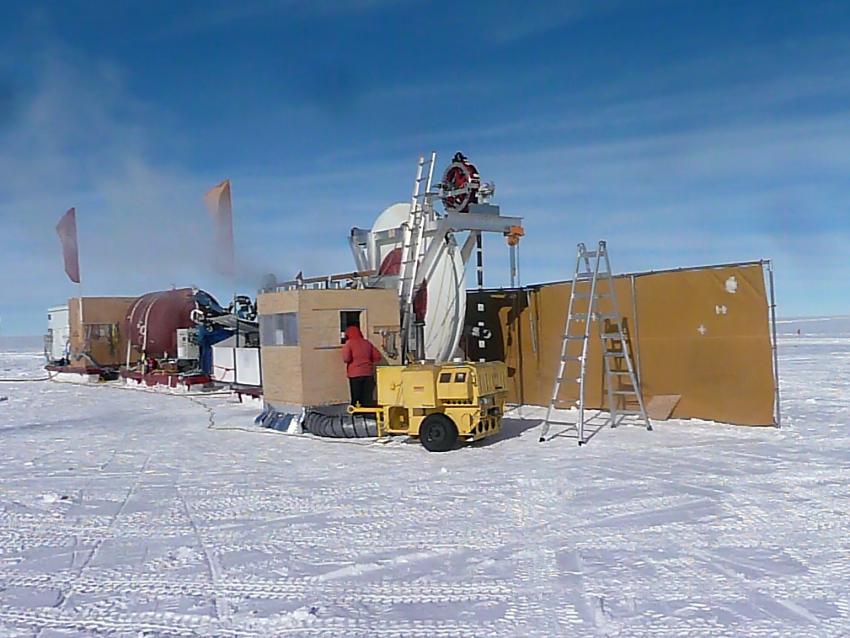 The Winkie Drill successfully completed its second field season, this time in Ong Valley (PIs Putkonen and Morgan; G-192-M). Drill upgrades made in Madison following the previous project in the Ohio Range proved successful, and IDDO engineer Grant Boeckmann was able to collect quality mixed media cores consisting of ice, silt and rock. While the original project goal was to collect three cores from two separate sites (six cores total), the ice encountered contained much more sand, silt and rock than the PIs anticipated. One core was collected at each of the two sites, with one core to 10 meters and one to 12 meters depth. The higher debris content proved very useful for the science goals, reducing the number of holes needed. 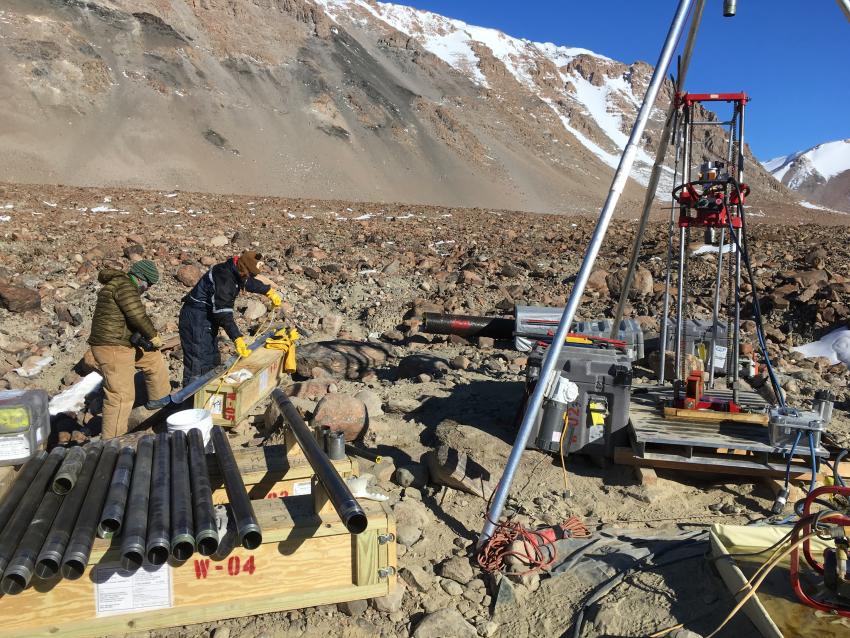 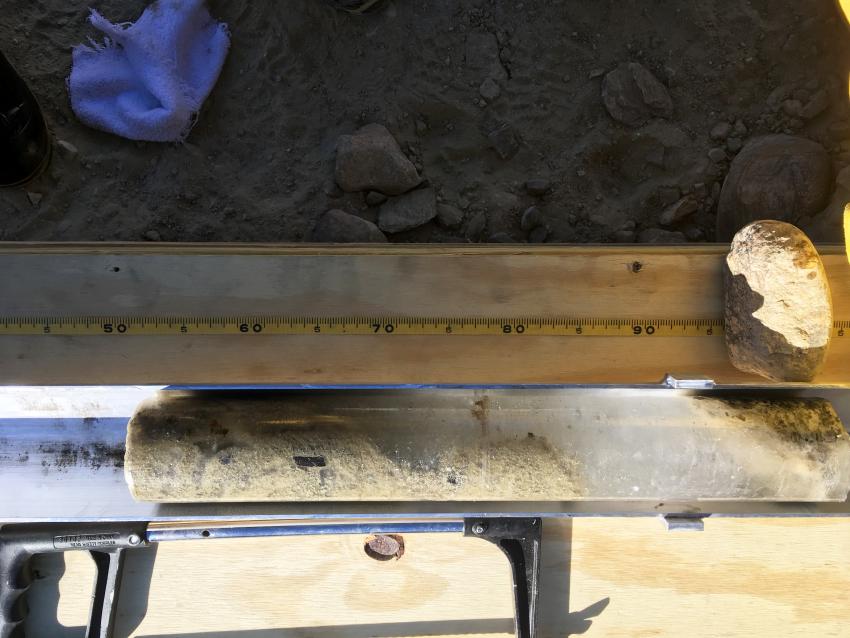 IDDO also supported six hand auger projects during the 2017-2018 field season through the provision of Hand Auger and Sidewinder equipment.

The IDPO Ice Core Working Group (ICWG) meeting was held in Alexandria, VA on January 22, 2018. Scientific findings from recent drilling activities were presented, and future possible investigations in Greenland and Antarctica were identified and discussed. The ICWG reaffirmed Hercules Dome as the priority deep drilling site for the community, due to its key location in archiving evidence of past dramatic changes in the West Antarctic Ice Sheet. Science-technology tradeoffs were discussed regarding use of the Foro 3000 Drill versus the DISC Drill at Hercules Dome; the DISC Drill delivers a larger volume of ice, however the Foro 3000 Drill has much lower logistical requirements. The ICWG came to agreement that the Foro 3000 Drill will be the drill of choice for this important site.

Foro 3000 Drill
IDDO kicked off development of the Foro 3000 Drill system during the first quarter. The Foro 3000 concept builds on the Intermediate Depth Drill (IDD) system and will allow for deep coring down to 3000 meters depth. A detailed task list was developed and other important documentation such as the Project Management Plan and the Engineering Requirements were completed and formally released. Detailed design work was completed for updates to the IDD's anti-torque components to allow for accommodation of a larger-diameter cable. The IDD sonde design was also modified to allow for recovery of 3-meter long cores per drill run.

Thermal Drill
IDDO engineers researched potential vendors for new heat rings, as the former model is now out of production. IDDO also worked with IDPO and community scientists (Rick Forster, Lora Koenig, Peter Neff, Eric Steig) to iterate on a Science Requirements document before planned modifications are made to extend the Thermal Drill's depth capability to 300 meters, as is called for in the Long Range Science Plan.

IDPO Education and Public Outreach engaged over 800 visitors at the Geology Museum at Rutgers University, where visitors participated in multiple hands-on activities to learn about ice core science and the science behind challenges of working in the polar regions. This event was facilitated by the Associate Director of the Geology Museum, who had been a 2017 participant in the IDPO School of Ice workshop. 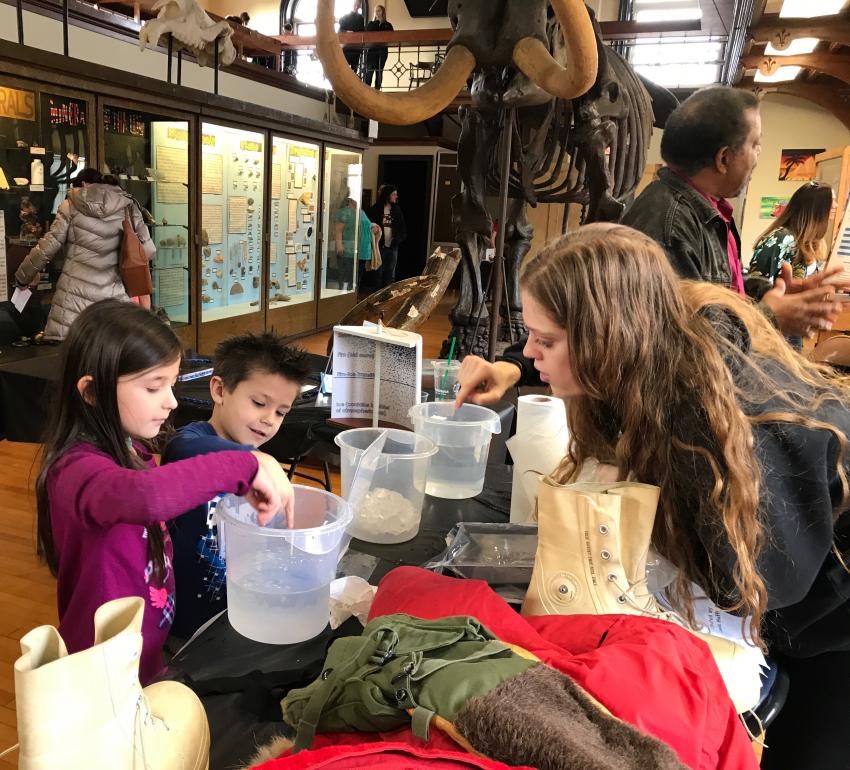 Students and their parents engage in hands-on activities while learning about ice core science and the challenges of working in the polar regions. 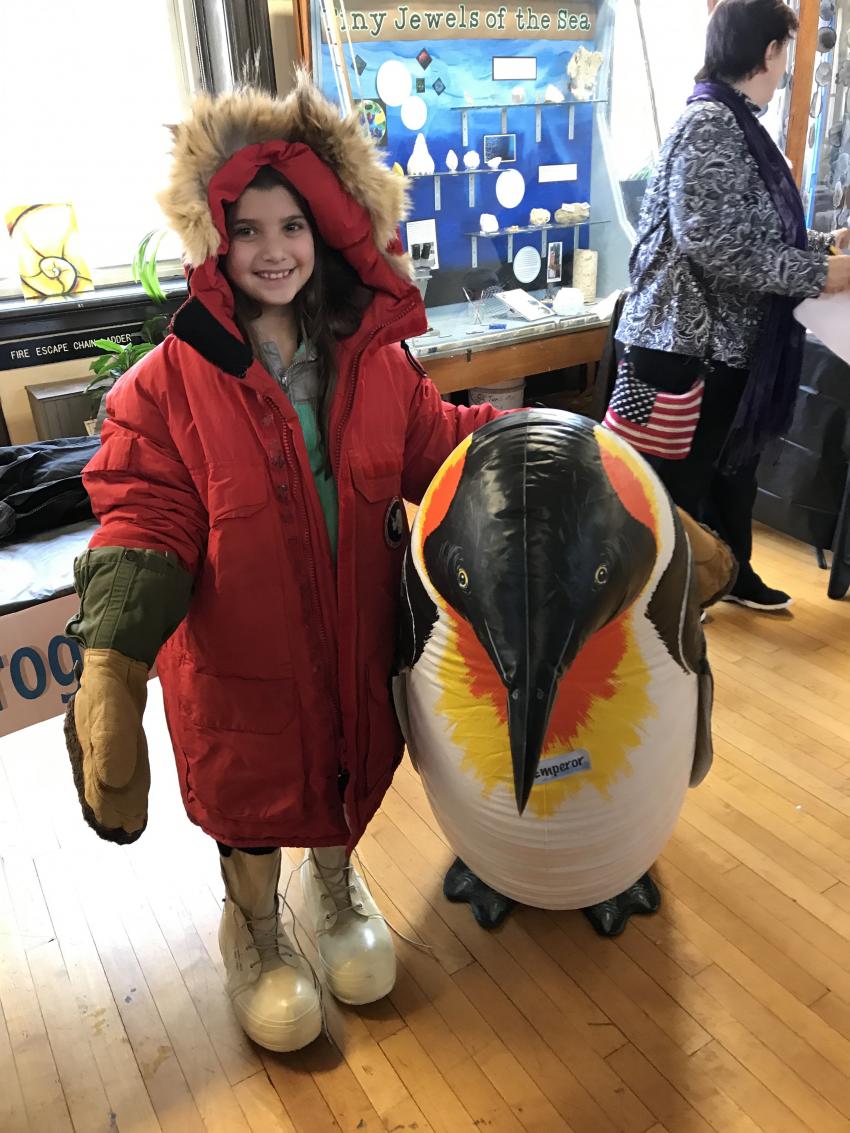 Students and their parents engage in hands-on activities while learning about ice core science and the challenges of working in the polar regions.

IDPO will be working with the Science Advisory Board and community members in the coming month to update the Long Range Science Plan. If you envision the need for ice drilling for your project in the coming decade, send several sentences descibing the science driver and the envisioned field date and location for your project, so that your plans are voiced in this planning document. Please email your input to IceDrill at Dartmouth dot edu soon! The 2017-2027 Long Range Science Plan is available at https://icedrill.org/about/resources.shtml#scienceplan

Scientists who are proposing research that will require ice coring or ice drilling should request field support from IDPO-IDDO by downloading the form for drilling support from https://icedrill.org/scientists/scientists.shtml. Scientists who seek to include IDPO education and outreach activities associated with U.S. ice coring or drilling science projects should follow the directions on getting "Outreach Support for Scientists" from https://icedrill.org/scientists/outreach_support.shtml.

Scientists should send support requests to Icedrill@Dartmouth.edu at least 3 weeks before the target date for submitting your NSF proposal. Early submissions are strongly encouraged.

For further information on requesting IDPO-IDDO support, visit our website at http://www.icedrill.org/scientists/scientists.shtml or contact us at IceDrill at Dartmouth dot edu . 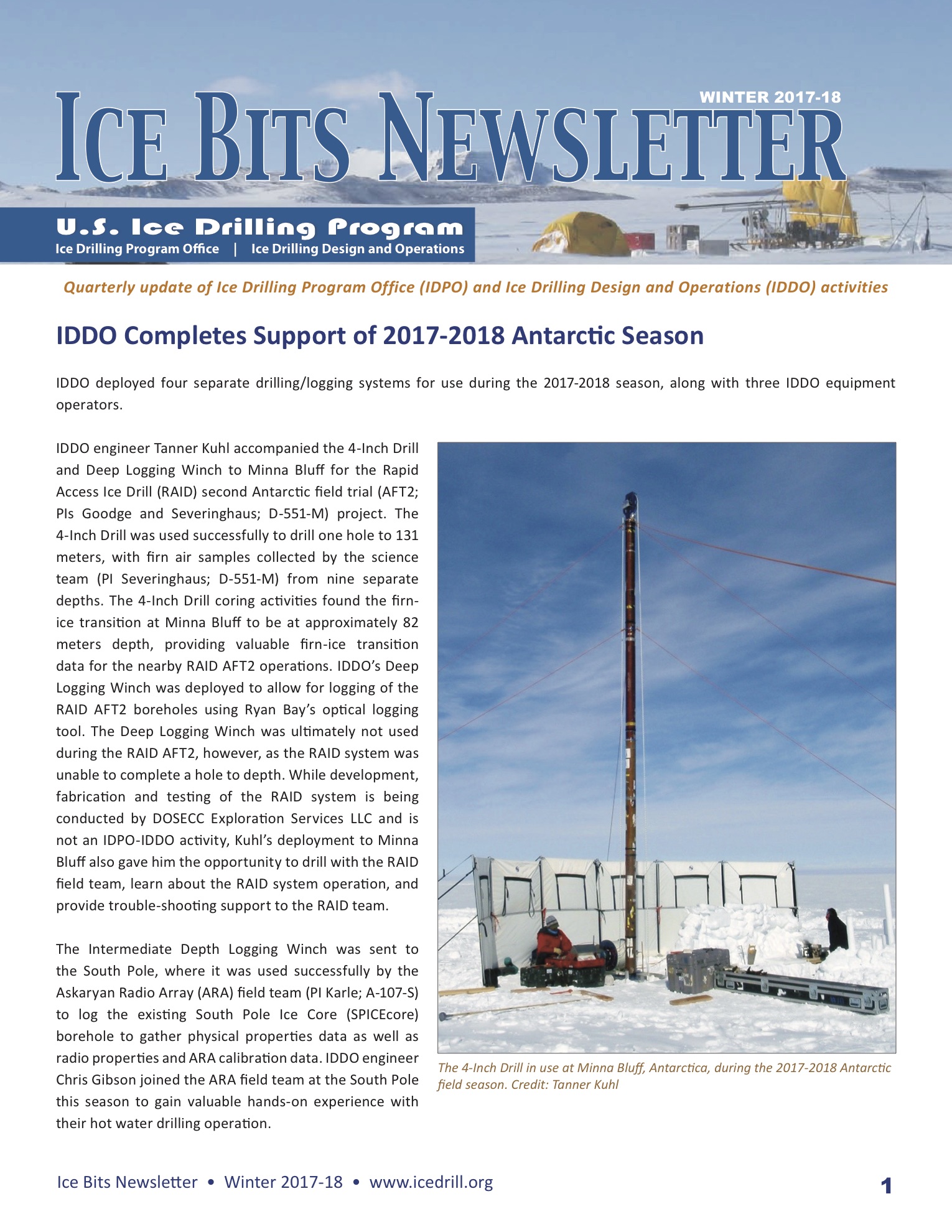