The 2011-2012 Antarctic field season has come to a close with numerous IDPO/IDDO-led projects displaying exciting and successful results. P.I. Paul Winberry and his field team were able to obtain over 9 km of high-quality seismic data through their operation of an IDDO Portable Hot Water Drill. Using the same drill, Huw Horgan and his team were able to drill over 280 shot holes in support of P.I. Sridhar Anandakrishnan's WISSARD Surface Geophysics project. 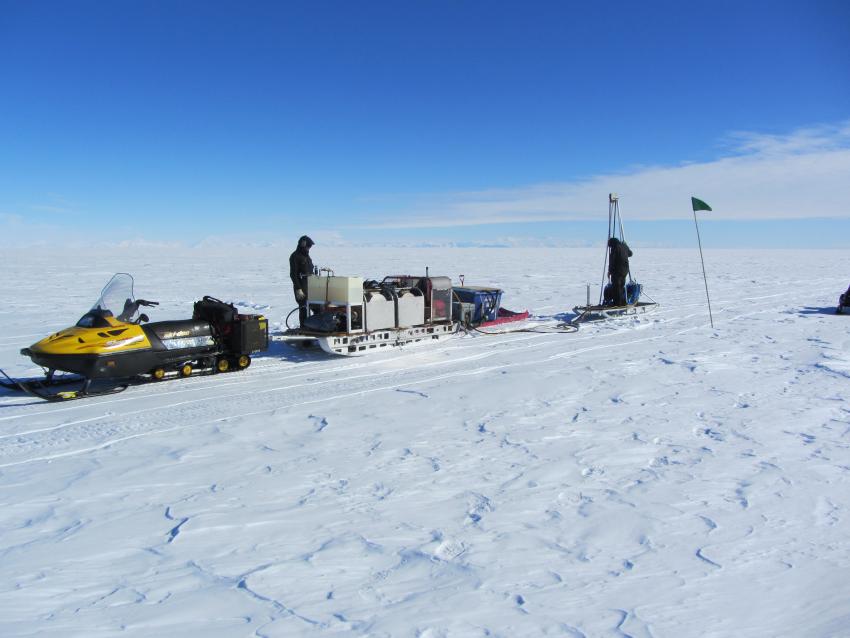 This season's maiden voyage of the DISC Drill's Replicate Coring capability proved to be both challenging and enlightening. While no core was obtained, IDDO engineers gained a great deal of insight into the process of creating a deviation for replicate coring. A new borehole camera proved valuable in assessing the results of the deviation effort. The video and operating data are being analyzed to aid in the modification to replicate components in order to improve chances of success during the upcoming replicate coring production season. IDDO has held several internal design reviews and, in addition, IDPO led an external review of Replicate Coring modifications held in Madison on March 27-28. Dr. George Cooper, Emeritus Professor at U.C. Berkeley and Dr. Alfred Eustes, Associate Professor at Colorado School of Mines participated as external reviewers. The effort to carefully review and analyze the recent field season experience has led to the design of tests and test fixtures needed to improve the replicate coring system.

IDDO was given permission by NSF to deploy a Badger-Eclipse Drill system to WAIS Divide this season in order to aid in driller training. This training proved extremely valuable, as IDDO contract drillers Elizabeth Morton and Michael Jayred were able to gain critical hands-on experience in the assembly and operation of the Badger-Eclipse system. Together with the help of visiting Danish Drill Engineer Steffen Bo Hansen, they were able to complete a 120-meter borehole just outside of WAIS Divide Camp. This very beneficial training exercise also served as a valuable opportunity to update operations procedures for the Badger-Eclipse system. 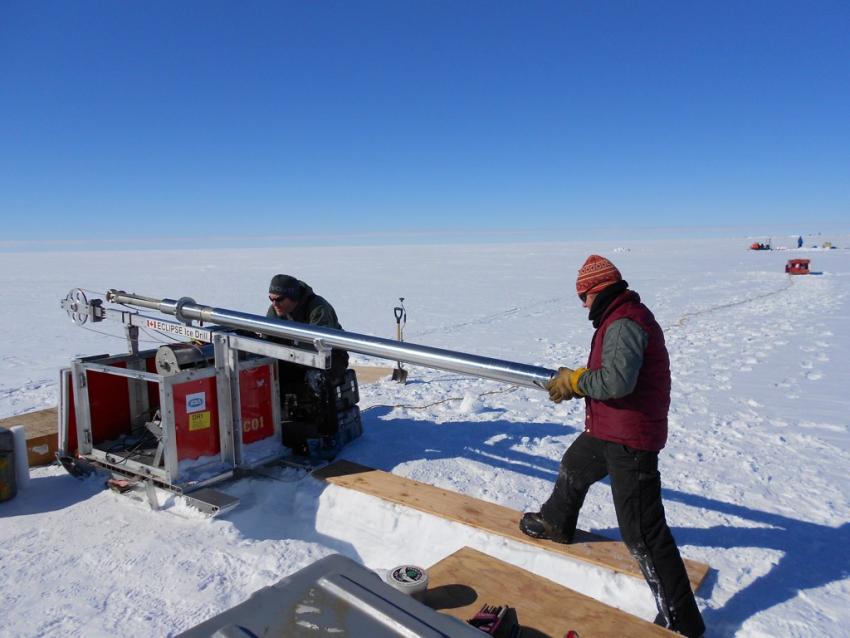 IDDO Engineer Josh Goetz was able to test his newly designed prototype for the next generation of hand auger equipment. While at WAIS Divide for DISC Drill and Replicate Testing operations this season, Josh was able to use the hand auger to drill four holes in firn of varying density and was able to take notes regarding further modification and fine tuning of the prototype. In addition, IDDO contract driller Tanner Kuhl was also able to briefly test a second copy of the prototype on Taylor Glacier in the Dry Valleys region. Josh, using his and Tanner's experience this past season, is modifying the prototypes to improve performance. 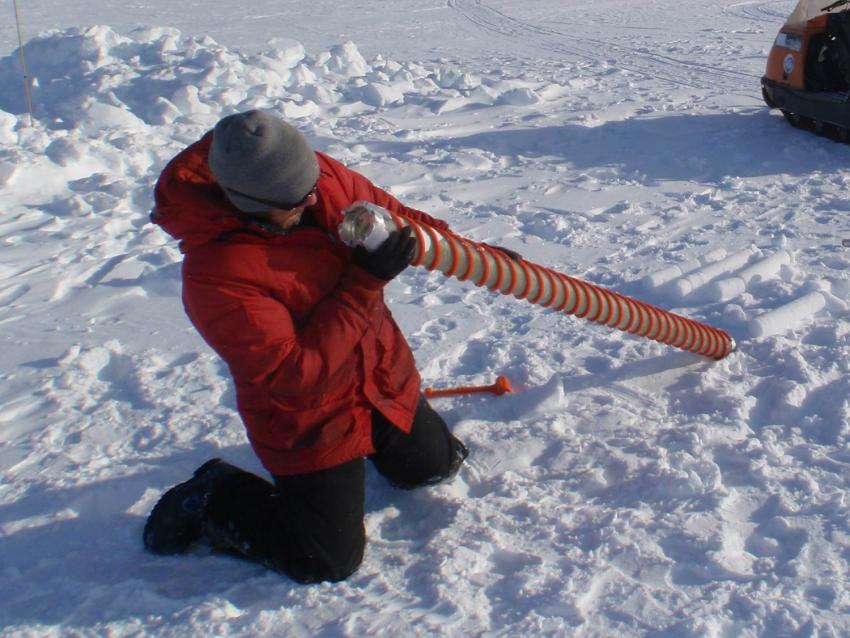 IDDO Engineer, Michael Gerasimoff, completed the feasibility and concept of a drill capable to quickly access the beds of ice sheets and ice intervals of interest. The drill system, called the Rapid Access Ice Drill (RAID), would be based on a mineral-exploration industry "diamond-drilling" rig and is envisioned to be capable of drilling through up to 3300 m of ice and collecting several hundred meters of core from the subglacial material.

During its 2012 meeting, the IDPO Science Advisory Board (SAB) voted to add elements to its structure to include standing working groups by including the existing Ice Core Working Group, and forming two new working groups: Borehole Logging and Subglacial Access Drilling. Other working groups may be added in the future if there is a need. Each working group will have a membership including a SAB member, and will hold virtual meetings through teleconferences and webinars to provide broader community input to the SAB for use in forming the IDPO Long Range Science Plan and other actions relevant to the working group interest.

Working Group on Subglacial Access Drilling (WGSAD)
The WGSAD represents the broad range of scientists interested in gaining data from beneath glaciers and ice sheets. The breadth of fields includes (but is not limited to) basement and bedrock geology, Cenozoic sedimentary basins, till, heat flow, exposure dating, stream hydrology (englacial, subglacial), geochemistry, limnology, oceanography, microbiology, etc. Ross Powell, currently on the SAB, is initially leading the group. Other standing SAB members currently representing these communities are Jill Mikucki for microbiology, and Howard Conway for exposure dating.

Working Group on Borehole Logging (WGBL)
The WGBL represents the broad range of scientists interested in deploying logging instruments in glaciers and ice sheets. Ryan Bay and Gary Clow, who are both currently on the SAB, are initially leading the group.

*** If you are interested in contributing to the WGSAD or the WGBL and advising on future paths the U.S. ice drilling program should take, please notify Joseph Souney of IDPO at joseph.souney@unh.edu by May 18. ***

Ice Core Working Group (ICWG)
The ICWG is an established group of scientist who investigate scientific issues pertaining to ice cores. Members are selected from the scientific community and their role consists of providing guidance to the NSF on topics related to sample access, distribution, inventory, policy issues, operation and maintenance of the National Ice Core Laboratory (NICL), and future directions for ice core research. Karl Kreutz, who is currently on the SAB, is the current chair of the ICWG. For more information about the ICWG, visit: http://nicl-smo.unh.edu/icwg/index.shtml

For more information about the SAB, its Working Groups, and to access SAB-related documents, visit: http://icedrill.org/about/sab.shtml

An emphasis on integrating engineering concepts into the soon-to-be released "Next Generation" national science standards was the inspiration for multiple teacher workshop presentations organized by IDPO Education Program Manager Linda Morris and involving IDDO WAIS Divide Lead Driller, Jay Johnson, and WAIS Divide Chief Scientist for Borehole Logging, Gary Clow. Using a highly interactive back-and-forth delivery tied to a new reflective classroom activity, the team modeled synergies between scientists and engineers as they work together to solve problems and create new science understandings. For information on how this approach might be adapted for your own outreach or to voice interest in participating in future outreach events, please contact Linda at: linda.m.morris@dartmouth.edu.

For the first time NSF's Office of Polar Programs supported an exhibit booth at this conference, which offered multiple research projects the opportunity to highlight their materials under one umbrella. Graduate researchers and outreach personnel interfaced with educators over three days. The response from the teachers was extremely positive. 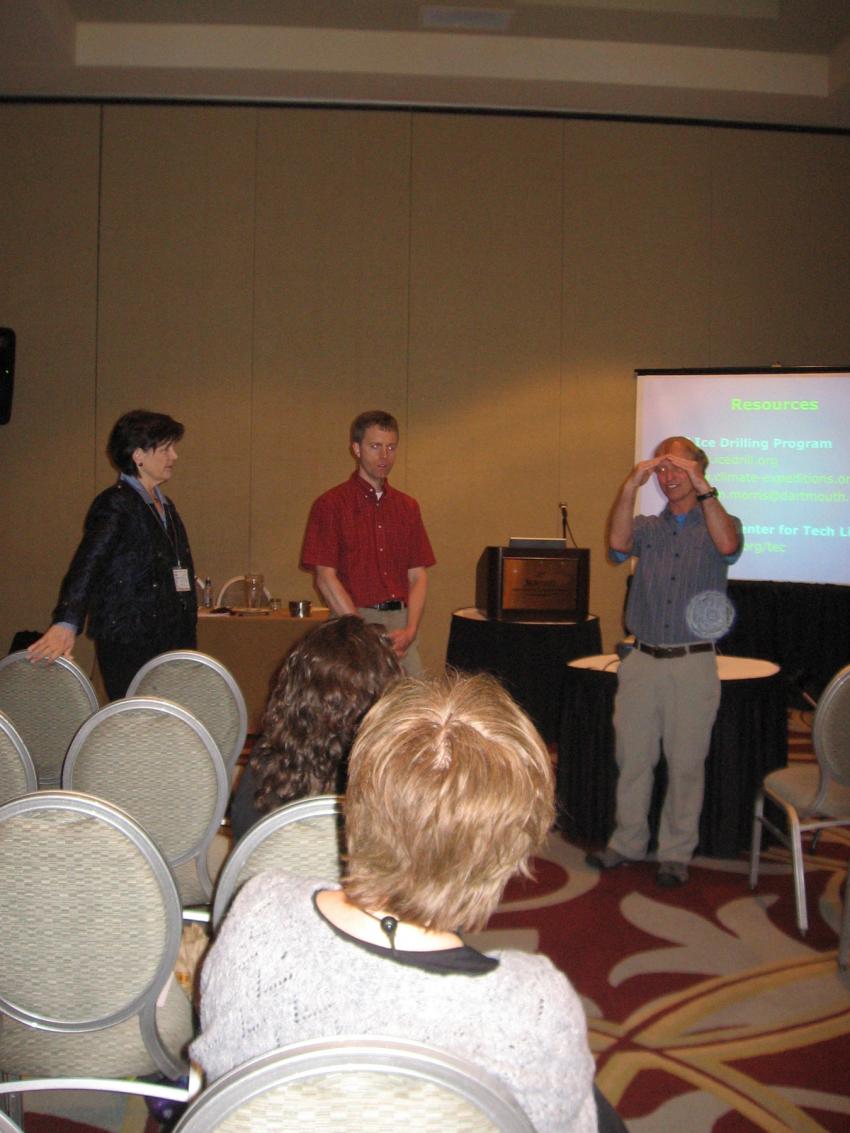 For information about each of these projects, visit: https://icedrill.org/fieldwork 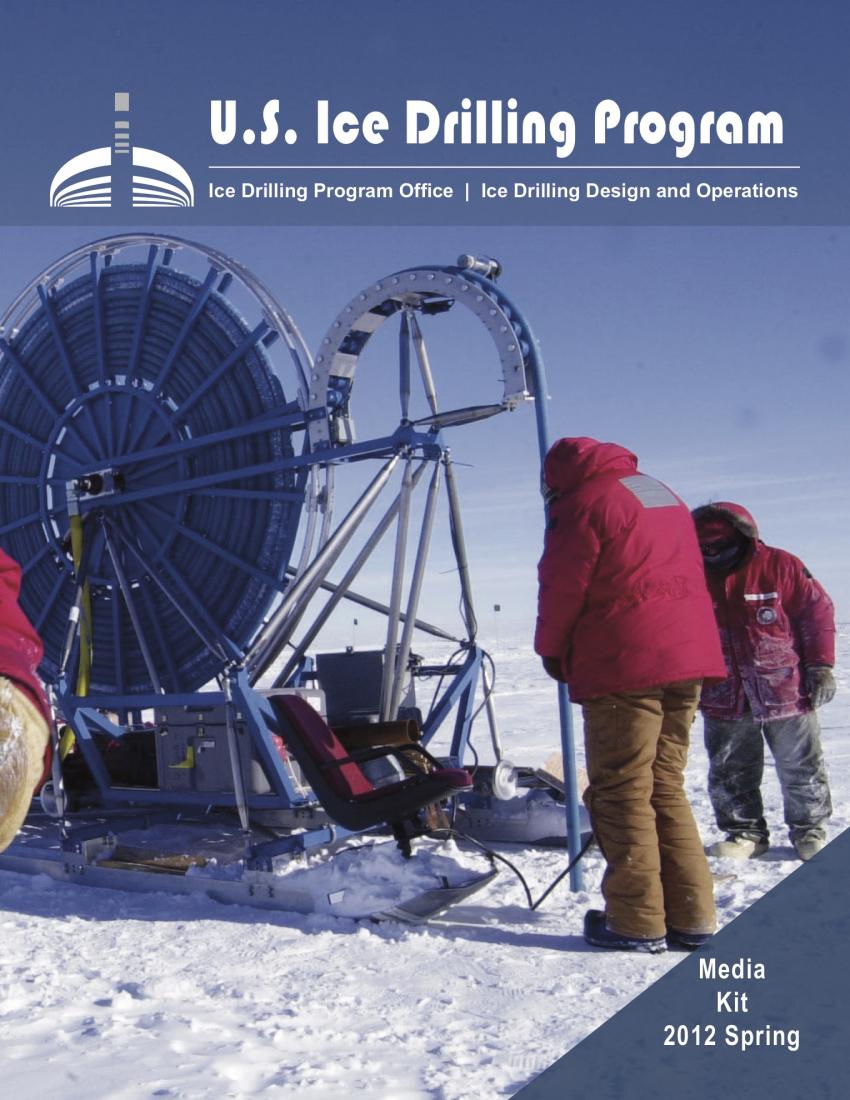 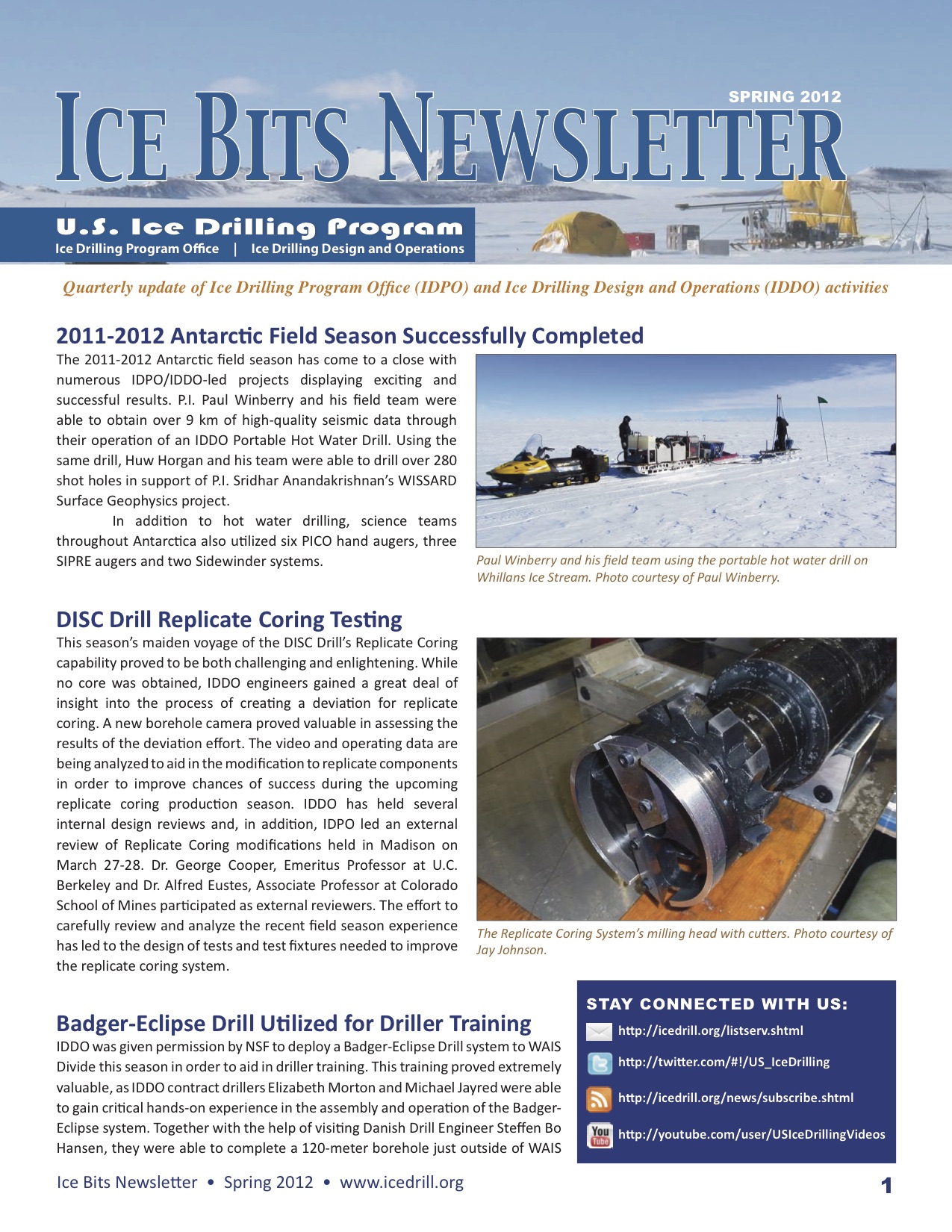