Work is quickly progressing at IDDO on the Rapid Air Movement (RAM) Drill upgrade project. Equipment upgrades for the modified system, also known as RAM 2, are being accelerated for completion in June to allow enough time for a field test before shipping the drill to West Antarctica for its first use on a science project. The ultimate objective of the upgrade project is to greatly reduce the overall system weight while maintaining the rapid production rate of dry shot holes. During the second quarter, all major component orders were placed. Electrical testing of the sonde commenced and initial testing for air pressure loss was completed. 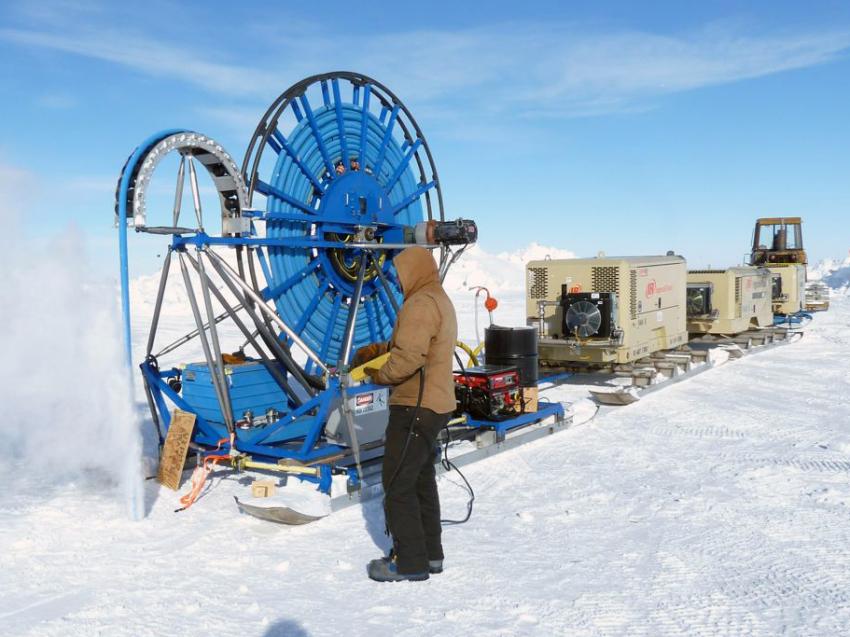 The original RAM Drill system in use during the 2010-2011 field season for the Askaryan Radio Array project at South Pole. Credit: Michael DuVernois 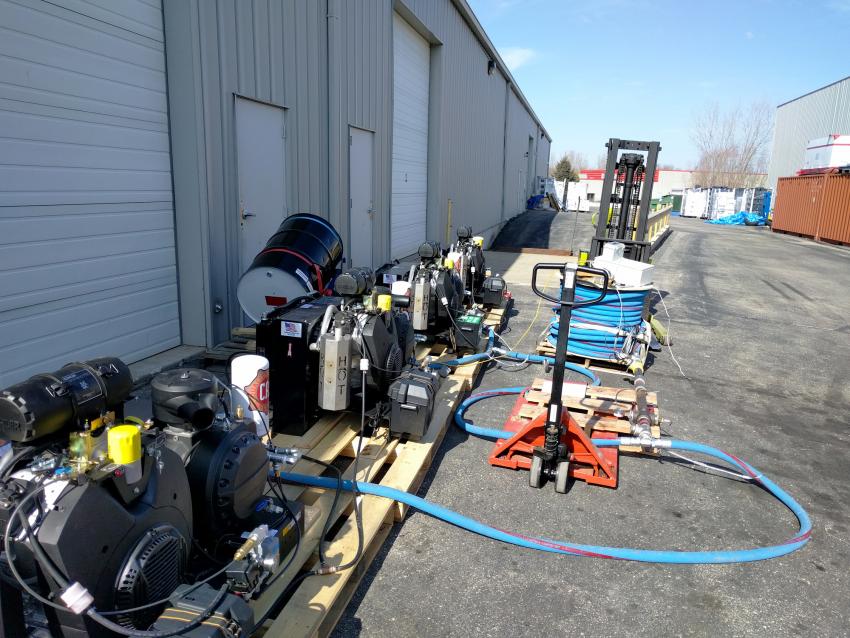 Proposed layout of the RAM 2 Drill in the field. Snowmobiles can now be used in place of heavy equipment for towing the equipment between drill sites. Credit: Chris Gibson

The second quarter saw the start of the 2018 Arctic field season. IDDO is providing support to the following projects:

(1) The Genetic, Phylogenetic and Functional Microbial Diversity in Permanently Frozen Aquatic Sediments Over Geological Time project (PI Vishnivetskaya; NSF award # 1442262) used a SIPRE hand auger in May to collect permafrost cores from Svalbard to investigate whether microbes embedded in permafrost are extinct, representing ancient terrestrial surface or marine communities preserved through time, or actively living communities that have been evolving since being buried.

(2) The Refreezing in the Firn of the Greenland Ice Sheet project (PI Rennermalm; NSF award # 1604058) is currently using an IDDO Hand Auger and Sidewinder to collect several shallow firn cores from the southwestern sector of the Greenland Ice Sheet. The firn cores will be used to investigate the stratigraphy, density, temperature and liquid water content of the firn cover and its spatial and temporal variations. The goal of the project is to better understand how the surface meltwater generated in the summer makes its way from its location on the ice sheet to the ocean.

(3) The Quantifying Heat/Mass Structure and Fluxes through the Full Thickness of Greenland's Percolation Zone project (PI Harper; NSF award # 1717241) will use a combination of shallow and deep cores/boreholes at a series of sites between Swiss Camp and Crawford Point to quantify the structure, thermal state, and heat fluxes through the full thickness of the firn column across a transect spanning western Greenland's percolation zone. Deep (up to 100 meters) boreholes will be drilled using hot water methods via a drill that is developed by the investigators. These deep boreholes will be augmented with a number of shallow cores to quantify density and provide access for temperature logging of the shallow firn thickness. The shallow cores will be drilled with an IDDO Hand Auger and Sidewinder.

(4) The Geophysical Reconnaissance to Expand Ice Core Hydroclimate Reconstructions in the Northeast Pacific project (PI Kreutz; NSF award #1502783) will use the Stampfli 2-Inch Drill to recover one 50-meter firn core and at least two 20-meter firn cores from the Divide Camp in the St. Elias Mountains, Yukon Territory, Canada. The investigators have maintained automatic weather stations at the Divide Camp since 2002, which represents an unprecedented observational record of snow accumulation and associated weather conditions in this glaciated region. By collecting a firn core to ~50 meters depth and analyzing stratigraphy (melt layers) and samples for stable water isotopes, the investigators will calibrate the ice core-based snow accumulation, temperature, and hydroclimate signals using the automatic weather station data. The investigators will also collect ground penetrating radar (GPR) data at the Divide Camp to investigate glacier geometry and spatial snow accumulation patterns and will ground truth the GPR data using the shallow (~20-meter depth) firn cores on a gridded basis.

(5) The Measuring Snow Compaction on Ice Sheets to Better Quantify Ice-Sheet Changes project (PI Kingslake; Columbia University internal funding) will conduct a pilot study in Juneau Ice Field, Alaska, to demonstrate the use of phase-sensitive ice-penetrating radar system (ApRES) for measuring firn densities and compaction rates. Within the accumulation area of Juneau Ice Field, the investigators will use an IDDO Hand Auger and Sidewinder to drill shallow firn cores to 40 meters depth and measure snow and firn density for comparison with the ApRES-derived densities. The goal of the project is to develop a new capability to rapidly measure the density and rate of densification of firn using ApRES.

IDDO hosted its annual Technical Advisory Board (TAB) Meeting in Madison, WI, on March 6-7, 2018, with drilling experts from all over the world. IDDO presented on the current status of IDDO field projects, equipment development projects, and maintenance and upgrade efforts to existing IDDO equipment. As with each TAB meeting, IDDO gained very valuable feedback from board members on equipment development projects, ideas regarding new technologies in ice drilling and other fields, as well as input on field project logistics. Minutes from the meeting are available at https://icedrill.org.

Foro 3000 Drill
IDDO continued initial development tasks for the Foro 3000 Drill system during the second quarter. Modifications were made to the Intermediate Depth Drill cutter head design that may make it possible to perform multiple core breaks during one drill run. This will be of value when drilling brittle ice with the Foro 3000 Drill. Detailed design of the winch drum was also initiated during the quarter.

Foro Drill
Fabrication of the Foro Drill core barrels was completed and all parts for the anti-torque and motor sections were ordered except for the actual drill motors for which IDDO expects to pursue quotes in the third quarter. The magnetic slide hammers were assembled, and load testing of the sled and hitch was completed. Shipping cases for the sondes, tower, and winch were also ordered.

Rapid Air Movement (RAM) Drill
Acceleration of RAM Drill design and procurement tasks continued to accommodate a potential test of the system in Greenland during summer 2018. All major component orders have been placed and electrical testing of the sonde was initiated. Initial testing for air pressure losses was completed.

Thermal Drill
Updated science requirements for IDDO's Thermal Drill were finalized at the end of February. A thermal or power limiting feature is being planned as part of the system upgrades, to help prevent premature heat ring failure. A benchtop testing procedure was initiated during the quarter and a number of thermal/power limiting options are under consideration. A manufacturer of suitable heat ring elements has been identified, and a core removal tool was designed and built making use of magnets to disengage the core dogs.

Intermediate Depth Drill (IDD)
The new 1650-meter long winch cable was spooled on the winch drum and was terminated, and the level wind controls were modified to work with the current emergency-stop system. Acceptance testing and troubleshooting of the Mage control system components continued. At the end of the quarter, the IDD's control system components were shipped back to Mage for further tuning.

Winkie Drill
IDDO is pursuing upgrades to integrate borehole casing with the current Winkie Drill system for a planned Thwaites Glacier project. Technology from the rock drilling industry and international ice drilling community is being researched.

Blue Ice Drill (BID)
Redesigned components for the BID tripod feet were received and installed during the quarter. A custom tent enclosure manufacturer was identified in April, and design of a tent and its integration with the BID tripod system has been initiated.

Foro 700 Drill
The IDPO Science Advisory Board identified in the IDPO Long Range Science Plan 2015-2025 a priority need to alter the surface equipment for the existing Intermediate Depth Drill to make a drilling operation that is less logistically intensive, to be used for ice coring at sites with limited logistics and with two months or less time on site. From discussions organized by IDPO with iterative discussions between IDPO, scientists, and IDDO staff, the science requirements for a 'Foro 700 Drill' were completed during the second quarter. The next step is to develop the conceptual design for the drill, which could possibly happen in PY 2019 pending availability of funds and project prioritization. 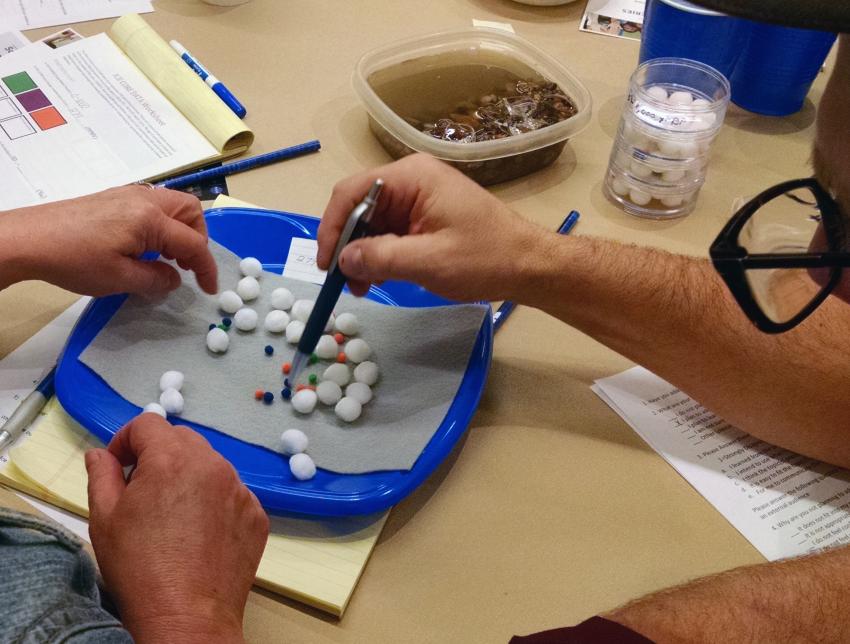 Educators engaged in inquiry-driven activities that they can use to teach their students concepts from ice core science. Credit: Louise Huffman 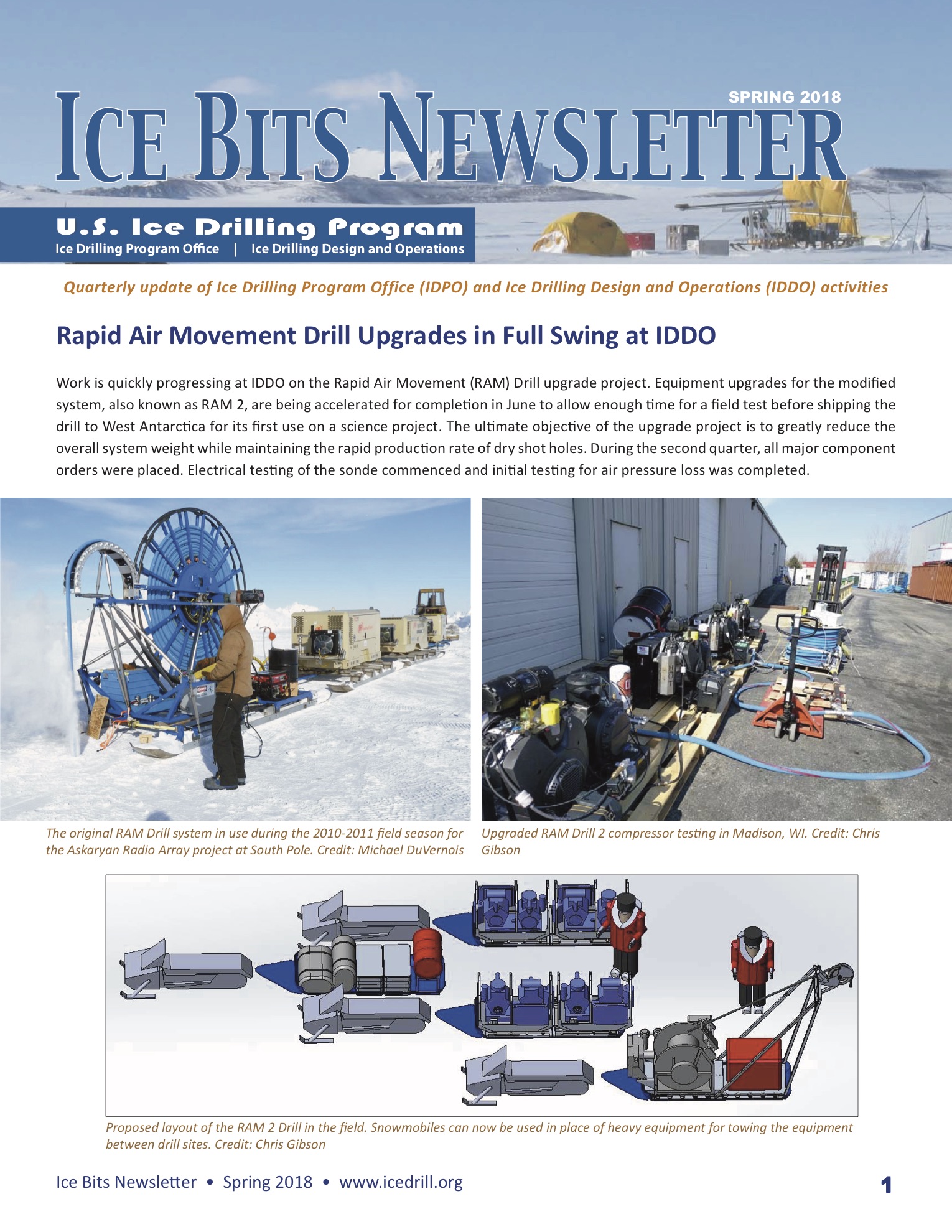